This beautiful green tree frog can be seen throughout most of the American South. It is also a popular frog species to keep as pet (some have lasted up to six years in captivity). If you go out at dusk after a rain you can hear their chorus all around. They have a variety of calls to communicate with. To attract a breeding mate, the males have a loud and distinct call to attract a mate. Usually mating will take place after big rains, sometime around late spring or early summer.

We captured these images and the related video in May in Charleston, SC. The frog was found in the water drain of the house in the background of the video. You could hear other frogs in the area calling as well.

The American Green Tree Frog is found around lakes, ponds, swamps, and wetland in the Southeastern US, from Eastern Virginia to Southeast Florida in the East and central Texas to the west. Some have also been observed in Delaware and Maryland.

Green Tree Frogs are also said to have been found around Vancouver Island and some areas of British Columbia. I’ve taken photos of invasive ones in Hawaii as well.

They prefer habitats with plenty of floating debris and vegetation. 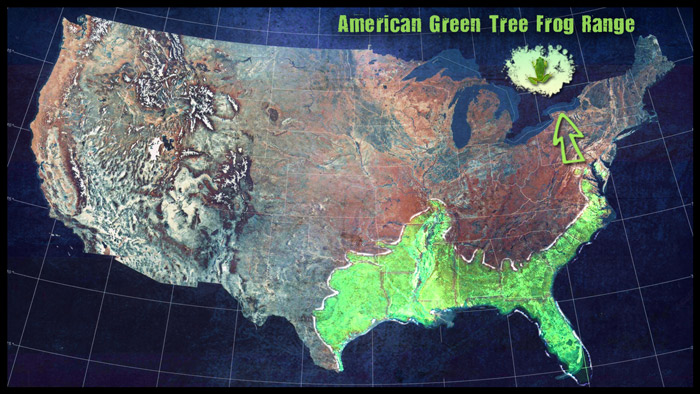 This small tree frog is usually bright green in color, but like many amphibians, the color can vary depending on their surroundings, mood, and temperature. This frog can, however, be easily recognized by its almost white, or pale yellow line running from just under the eye down to its groin.

These frogs eat all kinds of insects and are often found around outdoor lights at night where insects congregate. In captivity, they will eat crickets, flies, moths, and worms, but they may also need some vitamin supplements.

The American Green Tree Frog is a common frog within their geographic range and is listed as a species of Least Concern on the IUCN list. Frogs are indicator species, though, so any changes in the abundance of frogs like this could indicate habitat degradation.