What’s the deal with whooping cranes?

It seems like almost every day we hear about a new species going extinct. It’s a bit depressing, to say the least. Most of the time, it seems like no one even cares—the last remnants of a species simply wink out and die, and another page of history is turned over.

This story of the whooping crane is a bit different, though. Historically, scientists think there may have been as many as 20,000 cranes, but by 1941, there were only 15 whooping cranes left in the entire world.

How did their populations get so low? To figure this out, we need to understand a bit about their biology.

What are whooping cranes?

Whooping cranes are big birds—not the Sesame Street kind, but almost as large. At five feet tall, they can stand eye-level with many people. And if that wasn’t impressive enough, they have a wingspan of seven feet!

Whooping cranes tend to live for a long time—up to 24 years in the wild. This is good for their mates, because like humans, whooping cranes form long-lasting pair bonds with one other crane. If one crane dies, though, the other one will “remarry.”

What’s a year in the life of a whooping crane like?

Each pair of whooping cranes starts out the breeding season in the spring by laying two eggs in a wetland area, like a marsh or even a wet field. Traditionally, whooping cranes are migratory; they breed in the northern half of North America and fly south in the winter. However, there are only a small handful of wild crane populations left, one of which is entirely non-migratory and stays on the Florida coast year-round!

After their chicks hatch, the parents teach them how to be successful cranes. They show them all the good things to eat, like berries, crayfish and crabs, frogs—pretty much anything that will fit into their mouths.

By the time the baby cranes are big enough to fly in the fall, the crane parents lead them on their first of (hopefully) many migrations to come. They fly due south and winter in wetlands along the Gulf Coast. Once spring comes, they head north again and repeat the cycle.

Why are whooping cranes almost extinct?

As with most endangered species, there are many reasons why whooping crane numbers are so low. Even to begin with, there was never a huge population of whooping cranes. To put those numbers in perspective, today there are an estimated 310 million American Robins (Turdus migratorius) in North America. Compared to other bird species, whooping cranes started already behind in terms of population size.

When the United States started being colonized by white settlers, the whooping crane population started taking a hit. Marshy lands they had used for breeding, migration, and wintering grounds were dammed and dried up to create farms, and it became harder for the whooping cranes to find the habitat they liked. At the same time, people began hunting the cranes, and this also had a big impact on the population.

While most other bird populations did fine with these changes, there were already too few whooping cranes. These challenges were just too much for the already-tiny population, and their numbers started falling drastically.

By the time people realized what was happening to the whooping crane population, there was just one single population left in the entire world; they would breed in a refuge in Canada and winter in an American refuge.

How did people save the whooping crane from extinction?

Over the years, scientists have tried many times at reintroducing whooping cranes to the wild. None of them were very successful until scientists from multiple nonprofit organizations, state, and federal agencies came together and formed the Whooping Crane Eastern Partnership (WCEP). Their goal: bring back the cranes.

It was a big task: they held the fate of an entire species in their hands. Over the years, they’ve turned whooping crane reintroduction into a science—literally.

Some of the members of WCEP have captive pairs of whooping cranes in zoos and wildlife research centers. Each spring, the pairs of cranes produce two eggs, just as they would in the wild. Instead of letting the parents raise them, though, the scientists remove their eggs so that they’ll lay another set in a couple of weeks. By doing so, the cranes lay many more eggs than wild ones would. If this seems cruel, just remember: with each egg laid, the species moves a little further away from extinction.

Once the eggs are removed from the parents, they have an adventure ahead of them. The eggs are given to a set of surrogate parents—sandhill cranes (Grus canadensis) who incubate them just as they would their own chicks.

Shortly before the eggs hatch, they’re taken away again and placed in a mechanical incubator. Newly-hatched chicks will imprint on whatever’s around them when they hatch, and you don’t want them growing up thinking they’re sandhill cranes!

After hatching, the baby cranes are raised by yet another set of surrogate parents—people who are actually dressed up in giant crane costumes! The people have to be totally quiet when around the cranes, and they gently teach them how to be a crane just like a normal crane parent would. The system works out well until it comes time to migrate; luckily, the scientists have figured out a way around that, too.

Each fall, the crane people load themselves up onto an ultralight aircraft and take off. An ultralight is the only aircraft that flies slow enough for the cranes and lets them see their “parents” too. The “parents” lead them slowly south to the wintering grounds, where they keep tabs on them periodically to make sure their “kids” are still doing just fine. Come spring, the cranes are able to fly back to their breeding grounds and start up life as a normal whooping crane (albeit with one of the most interesting upbringings of any animal in the world, perhaps).

Thanks to these extreme efforts, the whooping crane population is slowly growing. Unlike the Tasmanian tiger, people were able to save them before they went extinct. It’s been a true success story: now, human kids will still be able to see real, live whooping cranes, not just grainy old black-and-white photographs. 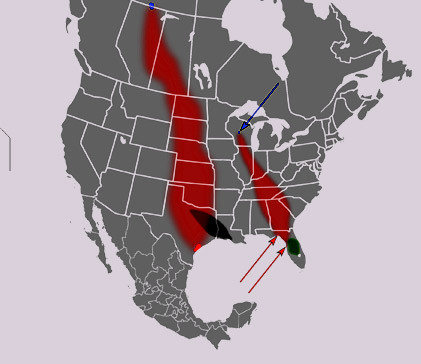