Our skeleton serves many important functions: it is the hard, structural framework that provides the shape and form for our bodies; it helps protect organs; and it works as point of attachment for our muscles. All of this allows our body to move. The skeleton is also important for storing minerals, and skeletal bone marrow produces red blood cells. When we are born we have around 270 bones, but as we grow older, some bones fuse together and eventually we end up with around 206. To help us explain this better, we made a short “bone basics” video.

The skeletal system is often divided into two parts: the axial skeleton and the appendicular skeleton. 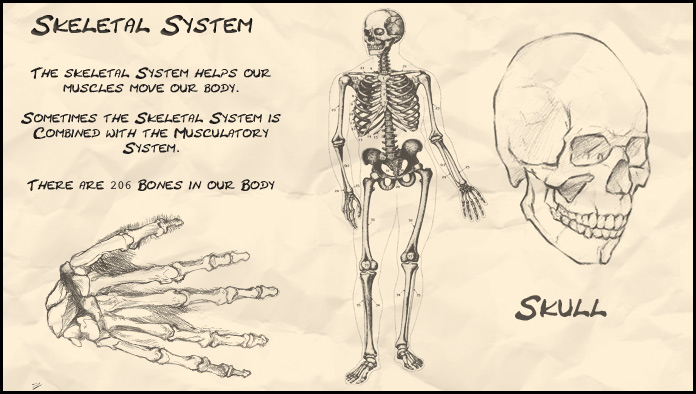 This skeleton consists of those bones that form the axis of the body.  They support the head, neck and core of the body. They include bones in the skull, sternum, ribs and vertebral column.

This skeleton is made up of bones that anchor the appendages to the axial skeleton.  They include the bones in the upper and lower extremities, the shoulder girdle and the pelvic girdle.

Bones are divided up into a few categories. Long bones are defined as bones with a body that is longer than the bone is wide. If we get asked to draw a bone in the skeleton, the long bones are usually the ones we think of. Short bones are about as wide as they are long. These are primarily found in the wrist of our hands and ankles of our feet (called the Carpal and Tarsal bones). They provide support and stability but do not allow for much movement. Then we have flat bones such as the shoulder blade, called the scapula. These are attachment points for several muscles and also provide good protection for our internal organs.

The fourth type of bone are called irregular bones. All the Vertebrae that make up our backbone are irregular. Their shape are just like the name implies–not very regular. The lower jaw bone is another example of an irregular bone.

What is Bone Tissue?

Bone tissue is in no way dead tissue. If that was the case we would be in serious trouble after a bone fracture. Bone tissue is continuously being replaced and rebuilt by bone-forming cells called osteoblasts and their counterparts the osteoclasts, cells that instead break down bone tissue. The outside of a bone is made up of compact bone tissue, also called cortical bone. It is smooth and solid with a low porosity. The bone tissue inside of the bones is very different. It is much more porous which gives space to a network of blood vessels and bone marrow. This spongy interior is referred to as cancellous or trabecular bone. Because of its porous nature it is much lighter than the cortical outside.

What Happens to Astronaut’s Bones in Space?