Durian - The King of Fruits

The durian is considered the King of Fruits. There are 30 species of durians, although only a handful are eaten.

The smell of the fruit is overpowering. Because of this, they are illegal on most forms of public transportation, something Jonas and Louise found out in our video on the chemistry of the smell!

The durian has been known and consumed in southeastern Asia since prehistoric times but has only been known to the western world for about 600 years. The earliest known European reference to the durian is the record of Niccolò Da Conti, who travelled to southeastern Asia in the 15th century. Translated from the Latin in which Poggio Bracciolini recorded Da Conti’s travels: “They (people of Sumatra) have a green fruit which they call durian, as big as a watermelon. Inside there are five things like elongated oranges, and resembling thick butter, with a combination of flavors.”

The Portuguese physician Garcia de Orta described durians in Colóquios dos simples e drogas da India published in 1563. In 1741, Herbarium Amboinense by the German botanist Georg Eberhard Rumphius was published, providing the most detailed and accurate account of durians for over a century. The genus Durio has a complex taxonomy that has seen the subtraction and addition of many species since it was created by Rumphius. During the early stages of its taxonomical study, there was some confusion between durian and the soursop (Annona muricata), for both of these species had thorny green fruit. It is also interesting to note the Malay name for the soursop is durian Belanda, meaning Dutch durian. In the 18th century, Johann Anton Weinmann considered the durian to belong to Castaneae as its fruit was similar to the horse chestnut. 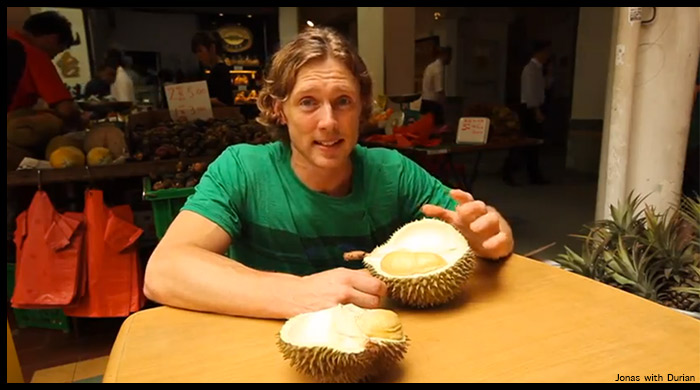