What is a Fungus?

You’ve probably seen a mushroom in the woods—growing out of a decomposing log, right? All those little log mushrooms actually belong to a taxonomic group designated the Kingdom Fungia. Fungi (singular fungus) include toadstools, yeast, mushrooms, athletes foot fungus, and more. Some are colorful. Some are drab. Many are yummy and really good for you. A few are deadly poisonous. And a few can be both, depending on knowledge and preparation!

Far too many people in the western world have a bad impression of mushrooms, mostly because they don’t know much about them. Some of us were taught from a young age to stay away from them because “they could kill you.” People are afraid of touching wild mushrooms, let alone eating them. Some experts have diagnosed this as Mycophobia or fungiphobia, an unreasonable aversion or fear of mushrooms. If you don’t believe me, start telling your friends and family how interested you’re becoming in mushrooms and see what their reaction is.

We are working hard to reduce mycophobia and dispel mushroom myths in videos like these:

In this biodiversity portal, we’d like to get rid of your mushroom fears and introduce you to the wonderful world of fungi. We’re teaming up with some of the world’s best mushroomers, expert foragers, mycologists, and researchers to decipher some of the mysteries of this wonderful underground kingdom. Of course, it wouldn’t be Untamed Science if we didn’t include some pretty amazing videos of our mycological adventures, too.

The technical description, what is fungus?

For those of you who want a detailed and technical description of what makes a fungus a fungus, the following paragraph is for you:

A fungus is a eukaryotic organism that is a member of the kingdom Fungia. Fungi are heterotrophic organisms possessing a chitinous cell wall. The majority of species grow as multicellular filaments called hyphae – forming a mycelium; some fungal species also grow as single cells. Sexual and asexual reproduction of the fungi is commonly via spores, often produced on specialized structures or in fruiting bodies. Some species have lost the ability to form specialized reproductive structures, and they propagate solely by vegetative growth. Yeasts, molds, and mushrooms are examples of fungi. Despite morphological similarities, fungi are a monophyletic group that is phylogenetically distinct from slime molds (myxomycetes) and water molds (oomycetes).

Essentially, fungi are organisms with a nucleus and organelles (eukaryotes) that need to consume other material to survive (heterotroph), like that decaying log for example, with a tough cell wall protecting them. The mushrooms that we often see are actually the fruiting body of a group of hair-like structures (hyphae) that grow in the ground or in rotting logs, away from our sight. Fungi sometimes reproduce sexually, with two organisms sharing genetic material, or asexually, only passing on their genes, with tiny little spores (kind of like a seed from a tree, but different) that are released from the mushrooms. Some mushrooms don’t send out spores, but instead grow other little mushrooms and keep growing from the same source, which is known as vegetative growth. Last, fungi are in their own group and are considered distinct from slime molds and water molds, even though they seem quite similar.

Fungi are more closely related to animals than plants, yet the discipline of biology devoted to the study of fungi, known as mycology, often falls under a branch of botany.

There are a few main taxonomic groups that divide fungi. We’ll keep it simple by starting with the four most common types. The Basidiomycota are what come to mind when most people think of a mushroom: having a stalk and cap. The Ascomycota are sac fungi that are typified by morels and sac fungi. The Zygomycota are all pretty small; bread molds are good examples. The Chytridomycota are the final group, made famous by the devastating chytrid fungus that is causing great harm to amphibians around the world. The diagram below should give you a simple way to visualize these groups. 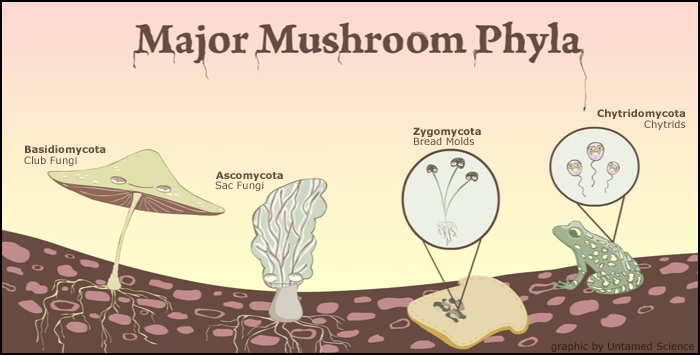 If you’re new to identifying mushrooms, the first thing you’ll probably think is, “boy, they all look the same!” This is probably because our culture has not trained us to notice the differences among them. However, we can tell a head of cabbage apart from some romaine lettuce pretty easily and can even tell different types of apples apart, even though one could argue that they look very similar. Mushrooms are extremely diverse, and (with practice) anyone can identify the mushrooms in their area.

This might be a good time to note, however, that many mushrooms are poisonous. For those wishing to identify mushrooms for edible purposes, we highly recommend starting with mushroom forays (hunts with local experts) before ever attempting to eat a wild mushroom. With that said, we don’t want to discourage anyone from the amazing world of mushrooms. There really is nothing more fun than finding a mushroom in the wild and learning to identify it. Check out this graphic for a start: 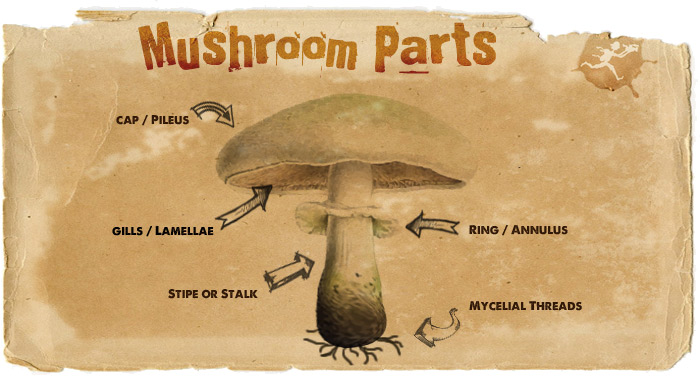 Some of our favourite fungi videos!

Since we feel that video is one of the easiest ways for you to learn a topic, we’ve created a few videos on mushrooms that we’re excited to share with you.

The most misunderstood mushroom? Check out our two part video on the Fly Agaric:

The science behind “magic mushrooms” and Psilocybin

Books on Mushrooms for the Beginner

Mushrooms have been a constant source of mystery for us. The way they emerge out of what seems like nothing in the ground has always made us want to learn more. Recently, we happened upon a treasure trove of mushroom resource books. The first two are by Paul Stamets and the last one by David Arora. Between these three books you should have everything you need to get interested in mushrooms. Plus, if you so choose, you’ll be able to grow your own.

This video is a great overview of some of the main messages mycologist Paul Stamets gives on the benefits of mushrooms. 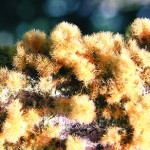 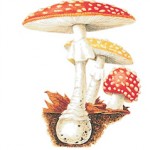 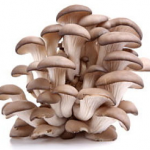