What Happened to the Tasmanian Tiger
MENU Skip to content

What happened to the Tasmanian tiger?

Imagine that you’re deep in the heart of Tasmania. The wind is blowing in off of the coast, and the plain stretches out miles before you to a barely visible mountain range. Suddenly, you spot some movement among the low swells and hills of the plain.

An animal steps into view—something you’ve never seen before. You peer closer and notice it has a head like a dog, but a long, low body with stripes on its hindquarters like a tiger. It even has a long, thick tail like a kangaroo, and is about the size of a large Labrador retriever. What on Earth is it?

It just might be a Tasmanian tiger (Thylacinus cynocephalus), also known as Tasmanian wolves or thylacines. Although scientists generally believe that the species went extinct in 1936, people still report sightings of odd animals resembling Tasmanian tigers. As of yet, though, no conclusive proof exists.

The extinction of Tasmanian tigers is only the last chapter of an old story that’s thousands of years in the telling. In recent history, Tasmanian tigers were restricted to the island of Tasmania, but they once lived on the Australian mainland and even Papua New Guinea as well.

The Final Straw in the Tasmanian Tiger’s Extinction

The settlement of Tasmania by white settlers marked the beginning of the end for the Tasmanian tigers. They brought large quantities of livestock with them and assumed that Tasmanian tigers would be just as fearsome livestock killers as the Western wolves and coyotes with which they were familiar. Tasmanian tigers certainly did kill some livestock, but most people believe now that the numbers were greatly exaggerated. The Tasmanian government responded to these fears by instituting a bounty system and eventually paid out more than 2,180 bounties.

In Australia, the settlers brought dogs with them. It’s likely the dogs also contributed to the Tasmanian tigers’ decline through direct competition and by introducing new diseases. There were reports that a distemper-like disease was killing many Tasmanian tigers right before the wild population winked out of existence.

What did the Tasmanian tiger really eat?

Despite presumptions to the contrary, it turns out that they might not even have been physically able to routinely kill large livestock. The massive witch hunt that led to their demise might have been completely unnecessary.

A recent analysis of the musculoskeletal configuration of the Tasmanian tiger’s jaw showed that it probably couldn’t regularly withstand the high pressures imposed on it when killing large prey. Their jaws were simply too long and skinny for that kind of diet. Instead, they probably ate smaller prey like possums and bandicoots.

Unfortunately for the Tasmanian tiger, they probably didn’t breed very fast—at least not fast enough to replace the population at the rate it was falling. Females tended to be much smaller than males and were probably easier for dogs and dingoes to kill. Even if females made it past their predators, though, they could only support four young at a time—not nearly as many as their placental mammal counterparts.

As the Tasmanian tiger population started diminishing, people realized what was happening. Zoos around the world began scooping up live specimens while they still had a chance, and there was a lucrative trade for the last few animals.

The last remaining live specimen turned out to be Benjamin, a Tasmanian tiger held in a zoo in its native Tasmania. By the time Benjamin was in the zoo, the Tasmanian government finally came to its senses and passed legislation protecting Tasmanian tigers. It came too late, though—just 59 days after the legislation was signed into law, a neglectful zookeeper locked Benjamin out of his sheltered area on a cold night, and the last Tasmanian tiger died of exposure.

The extinction of the Tasmanian tiger was a hard lesson to learn. We know we need to avoid manufacturing witch hunts against an entire species, to keep tabs on dwindling populations better, to start conservation efforts before the last living animal is identified. Sadly, though we’ve learned these lessons before with many other species, we still fail to follow these rules. Let’s hope that with proper education, we can prevent other unique species from going extinct in the future. 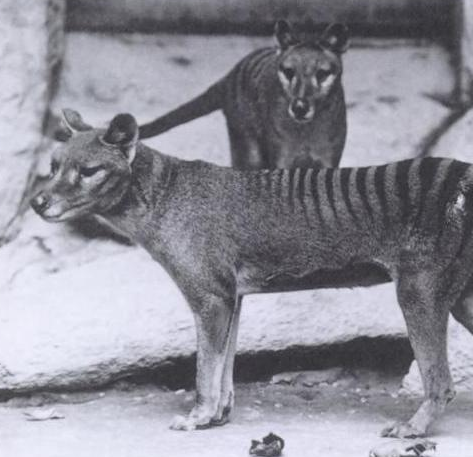