The 3 Rock Types - Up Close and Personal

Sooner or later, just about everyone is required to learn about the major rock types: Igneous, Sedimentary, and Metamorphic. But other than being a rock climber or a contestant on Jeopardy, why are they important to know? One good reason is that the rock types can often reveal a great deal about the geologic history an an area. That geologic history affects (among many other things) the soil  – and that, in turn, affects everything from farming, to the water you drink, to city construction, roads,  forest types, and on and on!  To give you the basics, here’s a little video about the three main rock types:

I think everyone starts their discussion of rock types with igneous rocks. It seems like a good place since igneous rock is the rock that forms from molten magma or lava – and  it is often the parent rock for the forming of the other types of rocks. In the video, I showed fresh lava cooling and forming a nice Pāhoehoe flow (Pronounced “Puh-Hoy-Hoy”, great name I might add). However, this is not how ALL igneous rock forms. In fact, most of the igneous rock we have on the planet formed very slowly, deep inside Earth (intrusive). Rocks like granite cooled this way. Since Granite cools slowly, you end up getting beautiful crystals that form. Next time you go hiking in the mountains, I’m sure you’ll see a lot of granite. Look around for the different crystals that form in the rock.

The slower an igneous rock cools, the longer and larger the crystals can grow. Pegmatites are igneous rocks that have the largest crystals – and by the way, that’s also where you find diamonds. Basalt is a common igneous rock that looks gray and has really small crystals that you can hardly see because they cooled faster and are smaller. Lava that’s extruded into the sea cools very quickly and can form obsidian, which looks like black glass. Because obsidian can break with very sharp and glass-like edges, Native Americans used it for making arrowheads and knives.

Metamorphic rocks form when tremendous heat and/or pressure is added to a rock. This heat and pressure changes the outward appearance of the rock and the physical nature of the rock. The rock we climbed in the above video, for example, is known as Gneiss (pronounced “nice”). That metamorphic Gneiss used to be granite, and the marble we use for counter-tops is metamorphosed limestone.

The Rock Types and the Rock Cycle

An important concept to convey in this whole discussion is that rocks can actually change over time. It’s all part of the never ending geologic cycle of mountain-building and erosion as Earth’s crust shifts. For instance, magma can build mountains that eventually get broken down and eroded. Those rock particles get washed into rivers and eventually into the sea where they can form sedimentary rocks. We all understand that plant’s grow, and that it takes time to see it. Rocks are similar, though it just takes millions of years for some of these processes to influence the size, shape and type of rock. The following diagram comes from our video and simply shows how the rocks can change from one type to another. Bottom line, geology ROCKS! 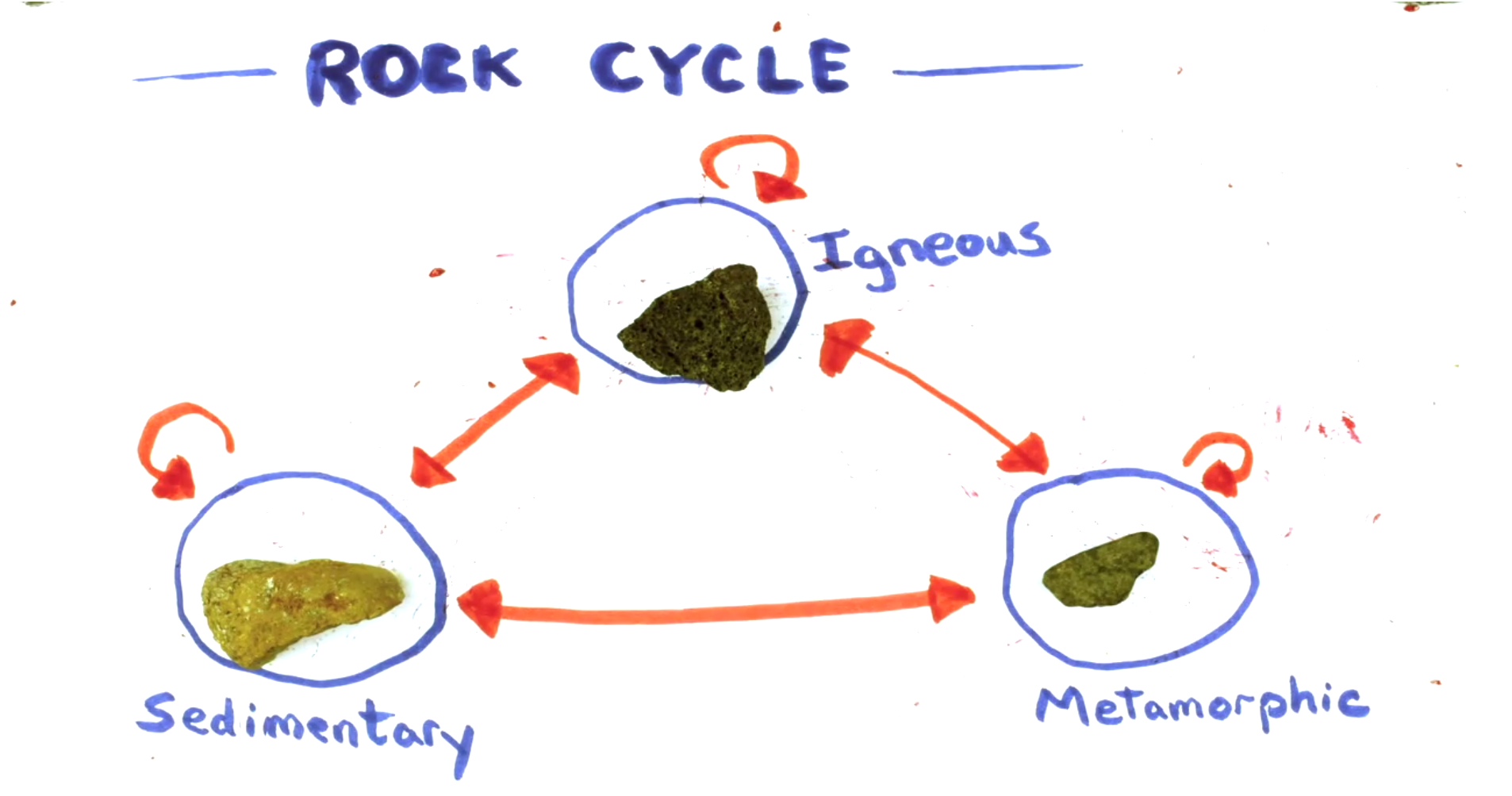 One thought on “Rock Types”