How to Track Baboons - Untamed Science
MENU Skip to content

How to Track a Baboon!

We’ve all had the experience of standing around with a group of friends, trying to make plans for dinner. One person is a vegetarian, another a dedicated carnivore, while a third has a wheat allergy. Half the group lives on one side of town and is lobbying for a restaurant close to home, while the other half is already hungry and would rather not travel so far to eat. Reaching a compromise in a group with such different needs and preferences generally requires extensive discussion and negotiation.

Animal groups confront similar challenges every day, but can’t talk through their conflicts or debate their options. How do they reach a consensus about where to go and what to do? Do they vote democratically? Or does a despotic dictator make the decisions for everyone? To figure this out, we need to be able to track the movements and behaviors of an entire group of animals, simultaneously. High resolution GPS tracking technology–the same basic equipment that car navigation systems use—makes this possible.

The goal of this project is to capture and GPS-collar every member of a baboon social group, and track their movements and behaviors in very fine detail. These data will help us figure out if baboons vote and maybe give insight into how we as humans make decisions as well.

Meg is the lead researcher on the project and brings a great deal of background in primate behavior work. Most of her work has been on capuchin monkeys in Panama. However, with the technology available, this research question called for larger animals, and baboons fit the bill. Meg is currently a researcher with the Smithsonian Tropical Research Institute, the Max Planck Institute in Germany, and will be an Assistant Professor at UC Davis in 2013.

Shauhin is currently a graduate student at Rutger’s University. He was awarded an internship from the Smithsonian Tropical Research Institute to work on this project, to help track the baboons every day over the summer months. He also did a side project where he collected fecal matter from the baboons to look for gastrointestinal parasite load in multiple baboon troops.

Roland is the director of the Lab of Biodiversity and Earth Observation in Raliegh, NC. He has research projects all over the world, all involving animal tracking. For this project, he came down to help assist Meg in the baboon trapping and help oversee the collar data collection.

Suzan is the lead veteranarian at the Smithsonian’s National Zoo, in Washington DC. She specializes on a wide range of exotic animals, and has been to Kenya for several years. During this study she took blood samples to study disease transmission in primates.

Matthew was the vet for the Kenya Wildlife Service, KWS, a  team that helped coordinate the project with the Kenya government. Matthew brought with him several trapping specialists, who were vital to helping the project become a succesfull collaboration between all parties.

When you get to know “Bob”, like we do, you’ll know that he’s the kind of guy that really doesn’t care about danger. He walks through elephant fences, and smokes cigars from the end of a burning log. Bob is a specialist in darting baboons and curator of mammals at the Detroit Zoo. 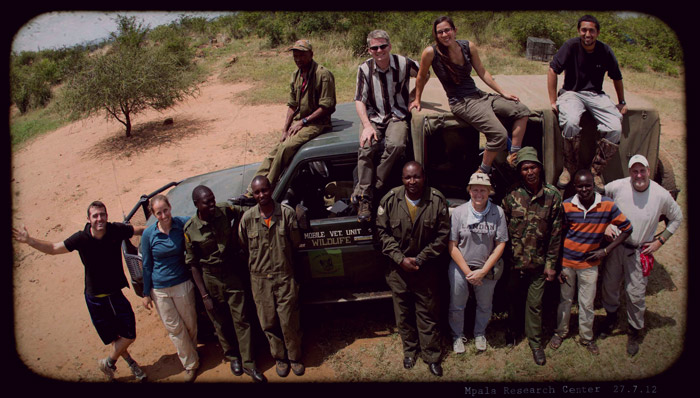 What is it like to be a field biologist?

A lot of students probably wonder what it’s like to do biological field research. In fact, most people probably have little idea what biologists do in the field. While field biologists are as diverse a bunch as you might get, Rob and Haley took a trip to the Mpala Research Station in Kenya to get a feel for one study in progress by a diverse crew of biologists.

In this ground-breaking project on baboons, the researchers are using cutting edge technology (GPS collars), and good old field research (tracking the baboons on a daily basis) to help ask how groups of animals make decisions. To do that, they needed to capture an entire troop of baboons and put these radio collars on them. It’s not as easy a task as it might seem. 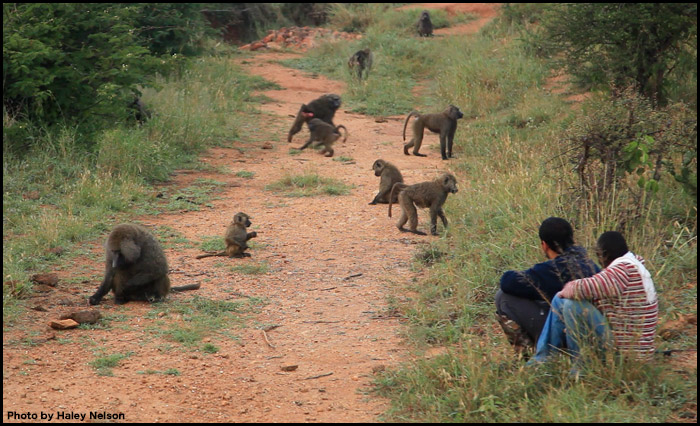 This video should show your students a great glimpse into the world of field biology, which can be both difficult, and entirely thrilling at the same time.