Caves and Caving in Roatan, Honduras

In March of 2009, the Untamed Science Crew ventured to Roatan, Honduras. Guided by caver Brian Chamberlain, the crew and deep sea explorer Karl Stanley discovered several unexplored caves, lowered themselves into heart-pounding adventure, and documented biodiversity in these unique environments. This is our brief story of two of those caves… 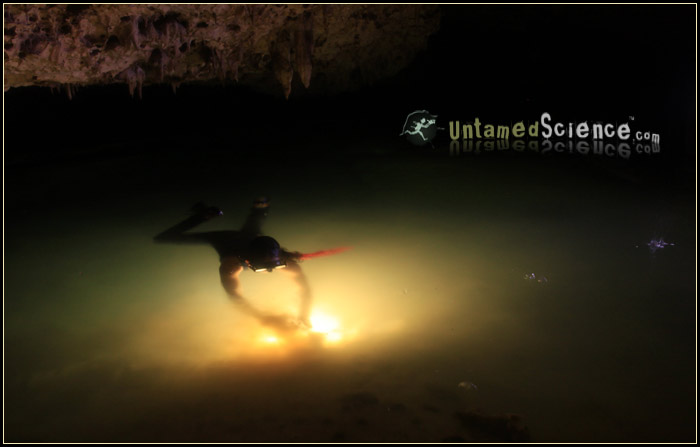 The cave pictured above was discovered near some Karst formations in West Bay. Hiking up the hill, we could hear bats and followed the sounds to the cave’s entrance. Once ropes were tied, we began the journey. The cave’s narrow and precarious opening descends to a muddy ledge from which we saw our first tarantula and an unfortunate frog. Bats continued to closely fly around us as we scaled down a rock wall to reach a landing and a sparkling, underwater lake.

We explored all the terrestrial parts of the cave, searching for alternate entrances and any life. We found no other entrances through the ceiling, so we waded in and each took a route that followed a different finger of the “underground river.” We are still unsure how far these channels go; perhaps there is an underwater entrance from the ocean. Navigating in these areas was tricky, to say the least. We had to lay on our backs and float face up, with about 3 inches of airspace above (less if you were wearing a headlamp). Inching back further into the cave through each passage was exhilarating (and good practice in prayer and techniques that center on mind over matter). The lack of airspace and tight-walled tunnels would be enough to send any slightly claustrophobic person into a panic attack, but the most disconcerting thing to me was that my ears were covered by water, so I couldn’t hear unless I stuck my face underwater. There were several places that you had to swim a little bit under some rock to get to the next bit with airspace, all the time wondering if the rain outside had any possibility of flash-flooding into this hole and making that couple of precious inches of air disappear. It was definitely not an adventure for the weak of heart.

We intentionally entered the cave close to dusk so we would not disturb the bats when they should be resting. Failure to do this would eventually lead to the bats leaving or even dying. Even so, many bats remained and returned to the cave during our excursion. Hundreds of them flew through tight spaces and hung from the stalactite-covered ceiling. When there was was little light, we could still feel them whizzing by our faces and bodies.

The next cave system we explored was also in West Bay.

On the way up, the crew paused for a gorgeous view of the island. Heading back down the hill, we happened upon a large crack, so we saddled up the rope and headed down. 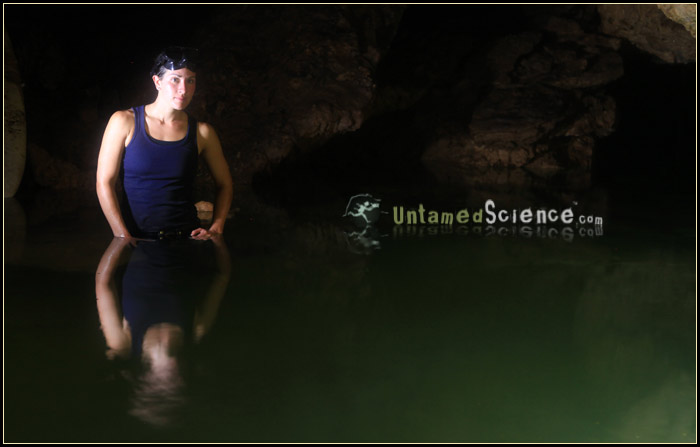 After descending 20 feet into the main cave, we held on to the walls and took turns shuttling across a muddy, 45 degree sloping ledge. Falling here would lead to an unknown fate down the blackness that hovered to our left.

Once we descended a little further, we gained better footing and took a better look around. We filmed the elusive amblypygids that make these caves their home. Many people call them “tailless whip scorpions” or “whip spiders”, but they are neither spiders nor scorpions. They are a closely related arachnid, though. If you’re interested you can view another video we did on amblypygids.

The formations in this cave were even more spectacular than the last–soda straws, saw tooths, draperies (cave bacon), helictites and several more that made me wish I were a geologist.

Getting out of this one was easier than getting in, and we will definitely be back with more gear and more light. I can’t wait to find out where this cave goes and what waits in its dark, unexplored corners.

Here is a brief article about some of the island’s karst formations.