Plants are living organisms belonging to the kingdom Plantae. They include familiar organisms such as trees, herbs, bushes, grasses, vines, ferns, mosses, and green algae. The scientific study of plants, known as botany, has identified about 350,000 extant species of plants, defined as seed plants, bryophytes, ferns and fern allies. As of 2004, some 287,655 species had been identified, of which 258,650 are flowering and 18,000 bryophytes (see table below). Green plants, sometimes called Viridiplantae, obtain most of their energy from sunlight via a process called photosynthesis.

PLANT DIVERSITY – AN ASSORTMENT OF AWESOMENESS

Land plants are amazingly diverse and adaptable, but they owe their leap out of the pond as it were to some hereditary assistance 400 mya from their closest living relatives, green algae. Think for a moment about the transition that land plants underwent, from an ancestral state of growing either partially or completely submerged under water to growing on land, surrounded not by water, but… air! It was a gamble, because it can be a tough, dry, desiccating world out there, but it paid off and plants thrive in incredibly diverse environments all over Earth.

Before we dive into plant diversity, let’s first take a little trip down memory lane of Earth’s evolutionary past. To understand the evolutionary relationships of a group of organisms, biologists construct a phylogeny. It’s kind of like a family tree, except instead of focusing only on a few generations; it zooms way out and looks at relationships over evolutionary time. It’s helpful to know which organisms arrived on the scene early (ancestral types) and which ones arrived later (descendants). Once biologists figure out ancestor/descendent relationships, they build a phylogenetic tree using different types of information such as the structure and shape of the plant (morphologic data) and DNA sequences of certain genes (molecular data). Plants are organized onto the phylogenetic tree based on similarities and differences in these data.

Land plants had to undergo exciting structural and reproductive changes to adapt from an aquatic to terrestrial lifestyle. Considering their vast diversity, all land plants have at least one very important characteristic in common – they undergo a unique life cycle that is referred to as an Alternation of Generations. This means that the life cycle of any land plant has two distinct phases. The amount of time spent in each phase varies depending on the group to which the plant belongs.

The first phase is called the gametophyte generation (phyte=plant, gameto=gamete). In this phase, we are referring to a plant (multicellular, not just a single cell) that has a single set of chromosomes (haploid) that produces gametes (egg and sperm cells) that are also haploid. Here’s the really interesting part, the egg and sperm cells are produced via mitosis, cell division resulting in two cells that are identical to the original cell.

For those of us more familiar with our own lifecycle than that of plants, the “egg and sperm cells produced via mitosis” part of the gametophyte generation description should sound some bells and whistles in your mind as a major difference to the way human produce their own egg and sperm cells. Our gametes are produced through meiosis or the division of a single cell into four cells that have half the genetic information of the original cell.

The second phase is called the sporophyte generation (again phyte=plant, sporo=spore). In this phase, we are referring to a plant (multicellular, not just a single cell) that has two sets of chromosomes (diploid), which is the result of the fusion of two gametes (sperm and egg). In the most basic sense, we’re talking about a plant that produces spores. More specifically, the diploid sporophyte produces haploid spores. How do they do it? Well, there’s only one type of cell division where the overall chromosome number is reduced during division and that’s meiosis. So the sporophyte undergoes meiosis to produce haploid spores.

Now that we understand the nuts and bolts of Alternation of Generations, let’s begin our tour through land plant diversity and see how this lifecycle plays out in each group.

The first group that emerged after green algae was the nonvascular plants or bryophytes. Remember that the vascular system is the “plumbing” that plants use to transport water, minerals, and nutrients. Vascular tissue is broken up into two types: xylem transports water and minerals, while phloem transports nutrients. Therefore nonvascular plants like mosses, liverworts, and hornworts do not have xylem or phloem, which also means they don’t have true roots, stems, or leaves. Some have rhizoids which might look like little roots, but they serve to anchor the plant. Rhizoids are not absorptive.

Without a well-defined system to transport water throughout their bodies, where would you guess that these types of plants are found? And if you had never seen a bryophyte before, but you knew it had no vascular system, would you suspect the plant to be tall or have a low stature? Bryophytes and mosses are found in moist environments, and they are typically low to the ground, because they lack stems or a vascular system to transport water.

There are several key innovations that our buddies the bryophytes had to undergo to make the evolutionary leap from an aquatic to terrestrial environment. Two structural changes allowed these plants to survive in a dry, terrestrial atmosphere. First, bryophytes developed cuticles, different from the layer of skin at the base of our fingernails and toenails. A plant cuticle is a waxy layer that covers the plant that keeps water in and keeps the plant from drying out. Second, bryophytes developed stomata, which are pores in the cuticle that allow gas exchange. Sure, plants release oxygen, but they also need to take in carbon dioxide for respiration, so pores are critical for gas exchange to take place.

The last key innovation for bryophytes is a reproductive adaptation. Remember, that in bryophytes the gametophyte generation is dominant. Being that this plant is a gamete producing plant, they do it with style. Bryophytes developed gametangia or specialized gamete-forming structures. There are two types: the male, sperm producing structure (antheridium) and the female, egg producing structure (archegonium). Bryophytes, for all the strides they made to adapt to living on land, have a carryover from their aquatic ancestry – they still need water for reproduction. Sperm released from the antheridium will swim to the archegonium to fertilize the egg. The developing zygote actually grows up out of the gametophyte into the spore-producing generation (sporophyte). It’s kinda like lipstick coming out of it’s tube . The diploid sporophyte is totally dependent upon the gametophyte for survival. Lipstick can’t survive without its case.

The key innovation for this next group, and for all plants from this point forward in our survey of plant diversity, is vascular tissue: xylem to transport water and minerals, and phloem to transport sugar. Vascular plants have true leaves, stems, and roots. Vascular plants also have a special substance called lignin which is a compound in the cell walls of plants that gives them additional strength and stability. Considering the plumbing and structural advantages vascular plants have, it’s no wonder that they are, in general, much larger plants than bryophytes.

The seedless vascular plants include club mosses, whisk ferns, horsetails, and ferns. Some of the plants in this group still need water for fertilization. Unlike the bryophytes, the sporophyte generation is dominant. The gamete-producing plant, or gametophyte generation is free-living but very small.

The key innovation for the remaining plants is the development of seeds. This may sound simple, but the development of seeds was a major adaptation in the evolution of plants. Seeds are hearty, and most importantly, they can endure dry conditions. The adaptation of the seed meant that plants were free from their dependency on water for reproduction, and consequently they could colonize drier environments.

Here’s a little insight into “the seed”. It’s a pretty remarkable adaptation that wouldn’t be possible without the evolution of a characteristic in seed plants known as heterospory. Basically this means the production of two distinct types of spore producing structures, and therefore two distinct types of spores: microspores and megaspores. The microspores develop into pollen, or the male gametophyte. The megaspore develops into the egg, or the female gametophyte. The egg and sperm fuse to form a zygote that develops into an embryo, which is protected inside several layers and wrapped in a protective coat. The whole package is the seed!

We group the seed plants into two major groups: gymnosperms and angiosperms. The exciting aspect of these two groups is that the sporophyte is dominant and the gametophyte is so reduced that it is dependent upon the sporophyte for survival. The sperm and egg develop within the sporophyte, and the female gametophyte is retained within the tissues of the sporophyte. There are three main types of gymnosperms: cycads, ginko, and conifers. Gymnosperms all rely on wind for pollination. Wind can be a finicky thing, and not always the most reliable, especially when something as important as ensuring viable offspring (fertilization and the production of seeds) is at stake! Our next group really upped their pollination strategy with a couple fabulous innovations.

Angiosperms are an incredibly successful group, radiating all over the globe. There are two secrets to angiosperm success: flowers and fruit. Aside from attracting people (floral industry rakes in billions of dollars a year!) flowers also serve the role of attracting pollinators. This is an advantage over gymnosperms that rely upon a gust of wind to transport their pollen!

Another key innovation of angiosperms is fruit. Fruits are sweet, delicious, and hidden inside of them is all the genetic material for the next generation of plant – the seed! It was very clever marketing to package such precious cargo in an outer covering that is soft, fleshy, sweet, and nearly irresistible to animals.

So as you can see, plants had to undergo a bunch of structural and reproductive changes to adapt from an aquatic to terrestrial lifestyle. But keep in mind the overarching trend in plant diversity – a shift from gametophyte dominant plants in the byrophytes, to an evolutionary intermediary step where the sporophyte dominant generation is dominant and the gameophyte generation is independent, to seeds plants where the gametophyte generation is so reduced that it is dependent upon the sporophyte for survival. 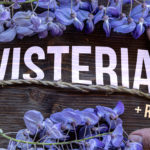 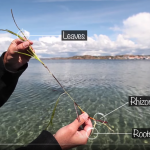 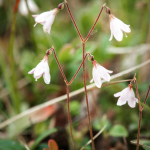 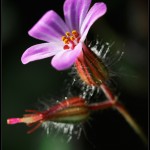 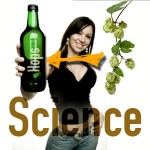 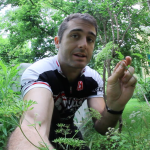 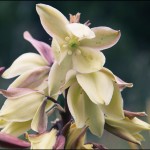 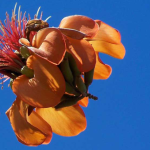 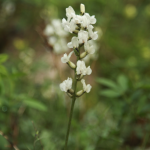 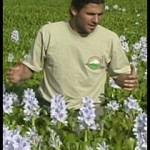