The History of Earth Day: The Background
MENU Skip to content

The History of Earth Day

Once a year on April 22 Earth Day rolls around. For those of us that are in school, it’s a time to plant trees, start recycling programs and do other “earthy” things. But what does that mean? It seems that most people treat Earth Day day a bit like Valentine’s Day or Saint Patrick’s Day. Its simply an event on the calendar that doesn’t seem to have a lot of meaning anymore. In fact, the role Earth Day plays has changed since it was first concieved. But to understand that, we need some history

To really understand Earth Day and why it came about you need to understand what was happening in the 1960s, because it was this decade that spawned what we have today.

During the 1960s the United States was in a war overseas (Vietnam). It was also having countless environmental disasters that started to outrage the public.

At the time, Americans and much of the world, were slurping leaded gas through massive eight cylinder automobiles. Large plants pumped out pollution with little fear of legal consequences or bad press. Air pollution was commonly accepted as the smell of prosperity. “Environment” was a word that appeared more often in spelling bees than on the evening news.

Although mainstream America largely remained oblivious to environmental concerns, the stage had been set for change by the publication of Rachel Carson’s New York Times bestseller Silent Spring in 1962.  The book represented a watershed moment, selling more than 500,000 copies in 24 countries, and beginning to raise public awareness and concern for living organisms, the environment and links between pollution and public health. 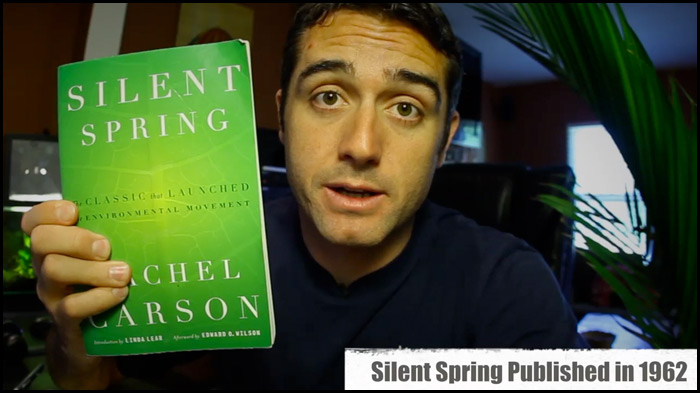 The “Father of Earth Day”

Then, Senator Gaylord Nelson, noticed a disconnect between the environmental policy that local people wanted and what the politicians in the government were willing to make into law. He wanted that to change. The Earth Day we celebrate now was first championed by him as an environmental teach-in on April 22, 1970.

Even though there is some debate as to the official first day of Earth Day (some say it was March 22nd of that year). The Earth day we celebrate today came from the event on April 22nd 1970.

Subsequent Earth Days have grown from the first event. They say some 1 billion people celebrate it today. If you want the detailed history of this event, I encourage you to visit the official earth day history site and read up more. If you’d rather just watch more of our videos on it, see below.