3 Liquid Nitrogen Experiments To Do At Home

Liquid nitrogen is really great for getting kids excited about chemistry. Not only will everyone love you at the next birthday party, but you can use it to teach some basic chemistry in a cool way. Recently we did a video with GoPro where we showed three basic liquid nitrogen experiments. This article explains in a bit more detail how you can pull them off. But first, you should watch the video; if this doesn’t get you inspired to try it yourself, I don’t know what will.

As the name implies, liquid nitrogen is nitrogen in liquid form. Nitrogen (in the form of N2) makes up most of the air we breath. It dissolves into our tissues; it is absorbed by plants; and is an essential element in the building blocks of our DNA. Most of the time it exists as N2. Ammonia and Ammonium are other common forms. Nitrogen as a gas can actually become a liquid under the right conditions—namely cold temperatures. We’re talking very cold. The boiling point for liquid Nitrogen is -196 degrees Celsius. To help us explain the basics better, we made this video:

Freezing and Smashing a Flower

One of the first things people use to demonstrate the extreme cold of liquid nitrogen is freezing a flower. Not all flowers are the same, though. You want a flower with very thin petals. Roses work particularly well. However, you might notice that even in our experiment in the GoPro video, the inside petals still didn’t smash apart. They were insulated by the outside petals and thus didn’t break fully.

Warning: Be very careful with this! Make sure you have an adult around to perform all experiments and wear protective clothing and goggles. We’re not dealing with flammables, but the bottles are exploding, which can be very dangerous.

The Process: Fill about 10 percent of a small plastic bottle with liquid nitrogen. Put the cap on and then step back to a safe distance to watch it explode. 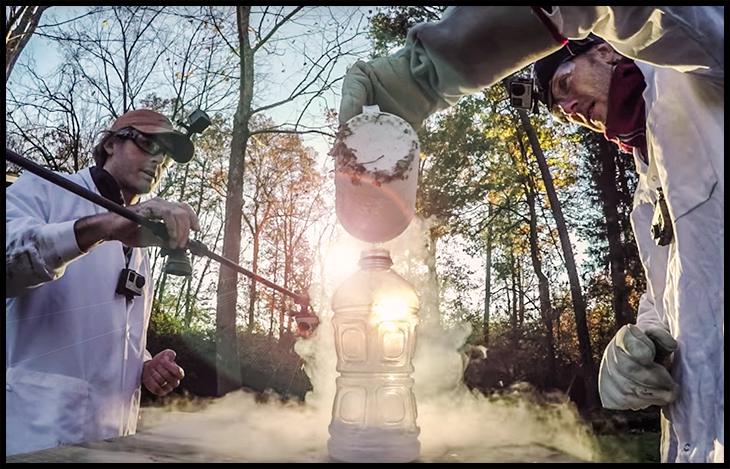 The Science: Because the boiling point of liquid nitrogen is -196 degrees Celsius, at room temperature the liquid instantly starts to change phase into a gas. The gas fills up more volume than the liquid and starts to increase the pressure inside the container. In fact the expansion rate is 1 to 696. That means one liter of liquid nitrogen will expand to fill 696 liters. Eventually the pressure is more than the plastic can handle, and the bottle explodes. Note that some plastic will explode earlier. We recommend the more rigid plastic containers as it gives you a bit more time to get to safety.

For added fun in demonstrations you can put the plastic bottle inside a garbage can and fill it with ping pong balls, leaves, or other material that will fly into the air during the explosion. This makes for a spectacle. 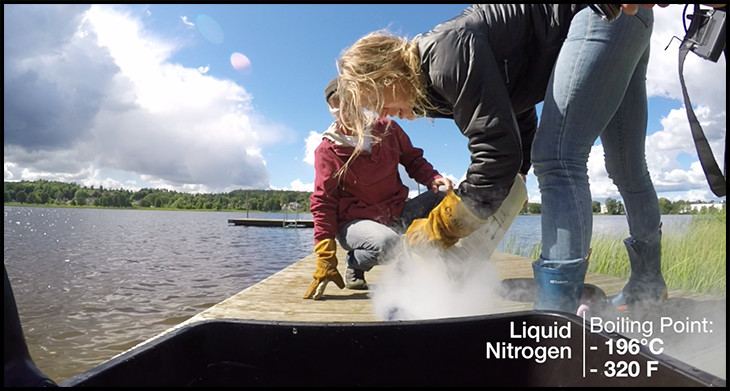 You can also use liquid nitrogen to create a very powerful bottle rocket. To do that you need to fill up a plastic bottle a third of the way with water. Then, pour in another 10 percent of liquid nitrogen. With a glove on, put your thumb lightly over the top and tip it upside down. This prevents all the water from pouring out. As you do this, the liquid nitrogen will quickly expand, creating an intense bottle rocket. 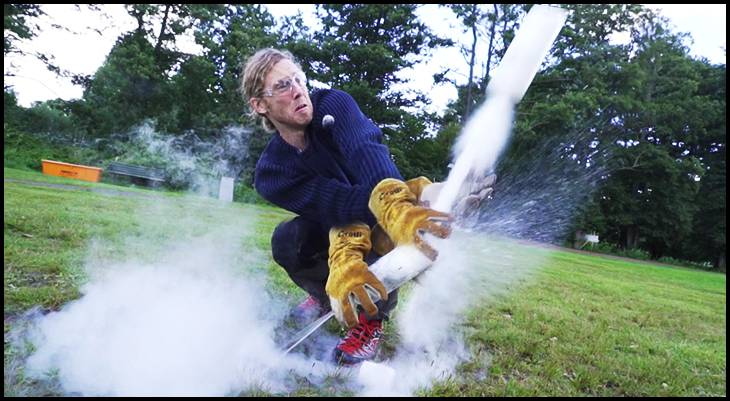 Where do you get liquid nitrogen?

For the longest time, we had no idea where to get liquid nitrogen. The truth is that it’s really easy to get. Just about every gas dealer in town has it, and it’s really cheap – about 5 bucks a liter. The real trick is that you’re going to have to get a container that will hold the liquid nitrogen. They won’t just pour it into any container. This is where it can get somewhat expensive. We found one here on Amazon for 230 bucks. It’s the only major investment you’ll have to make. After that, you’re good to go. Grant Thompson gave a nice overview of it in this short video.