Untamed Science is excited to work with Dr. Lindsay Zanno once again, director of Paleontology & Geology Research Laboratory at the North Carolina Museum of Nature Science, to announce a new dinosaur species!  Today we reveal to the world… Siats meekerorum!

The Siats dinosaur (pronounced SEE-otts) is a giant mega-predator (think T. rex but living at a different time). I just like saying that out loud: GIANT MEGA-PREDATOR! It is the first large, mega-predator found in the US in over 60 years, and it is the second or third largest carnivore EVER found in North America!

The artist’s rendering features a downy back of feathers and colorful skin patterns. It is now thought that many dinosaurs had a downy layer, evidenced by the presence of feather impressions or quill knobs (bumps that connect feather to bone), to provide extra insulation. Scientists have even been able to prove the color of some dinosaur feathers. But skin is a different story. Siats could very well have looked like it could be in a Kiss cover (I mean, tribute) band. But for now the colors and pattern are beautifully speculative.

Siats ruled about 100 million years ago (MYA) in a period of time between the Jurassic and Cretaceous periods. We know a lot about dinosaurs of the late Jurassic (like Stegosaurus, Allosaurus, Camarasaurus) and the late Cretaceous (like Triceratops and Tyrannosaurus rex), but there are tens of millions of years between these periods where we have had  little idea of what lived. What paleontologists are finding are whole other ecosystems composed of unique groups of dinosaurs we didn’t know existed at the time! One such group is the Carcharodontosaurs.

Siats is part of  the carcharodontosaurid dinosaur group, containing a couple of the largest known predatory dinosaurs. At this time, Carcharadontosaurs were the top predators. So imagine a world where the giant Siats is top dog, and ancestors of the T. rex (tyrannosaurs) about the size of great danes were running around. How adorable is that? It wasn’t until Siats and other Carcharodontosaurs went extinct that T. rex was able to evolve and eventually fill its niche in the ecosystem–the top predator most of us grew up learning about. If this sounds like a different world of dinosaurs than you were taught as a kid, that’s because IT IS! Relatively little is known about this period between the late Jurassic and the end of the Cretaceous periods…another reason the Siats find is so fascinating!

Siats was found in the desert of central Utah, an area great for finding dinosaur bones because of the exposed rock and sparse vegetation. This is ideal for spotting dinosaurs eroding right out of the ground. Paleontologists worked through 130° heat and monsoon rains to unearth the skeleton. If you want to see the dig site and how bones are really dug up and brought to the museum, you can see Dr. Zanno in action in this other video we did, Paleontology 101:

It’s quite different from the Hollywood portrayal of discovering a dinosaur; it’s way more hardcore.

Dr. Zanno and her crew honed in on this particular area to look at rocks that date to around 100 MYA, the time we know least about in the fossil record. The areas best for preserving dinosaurs were places where dinosaurs would die and get covered in sediment, especially near rivers, lakes and ponds. The finer the sediment that covered the dinosaur, the better the preserved detail in the resulting fossils. Some lake sediment can be so fine that it preserves an impression of dinosaur skin, wings, and feathers!

Siats comes from a Native American legend about a man-eating monster called the Siats.  The scientists who unearthed the skeleton learned of the story in the area in Utah it was discovered, and they adopted the name to reflect this local lore. To be clear, Siats were NOT man-eaters, of course. They lived 100 MYA and were extinct by the time the T. rex flourished at the end of Cretaceous.

So you might be thinking, “why isn’t it called Siats-osaurus?” Well the simple answer is that Lindsay named it and she’s bored with “-saurus.” Dinosaurs don’t have to have “–saurus” at the end of their name to be a dinosaur. Plus, paleontologists are so cool; they do what what they want. Scientists have named between 600-700 dinosaurs all around the world; many of the names are things you might not expect–areas where they were found or other sources of inspiration.

Why Does It Take So Long to Find New Dinosaurs?

You might be surprised that the initial discovery of the Siats skeleton was in 2008. The proper process to unearth a skeleton can be quite long. Here’s an overview :

There are still so many questions about Siats and the ecosystems of this in-between time that it’s really an exciting time to be a paleontologist… or even someone who just loves dinosaurs! The more Siats fossils found, the more we will know about this fascinating creature that ruled a period of time that is still a wonderful mystery. If you have any questions about Siats, please Leave a Reply below!

Want to see the FULL UNCUT INTERVIEW WITH LINDSAY? 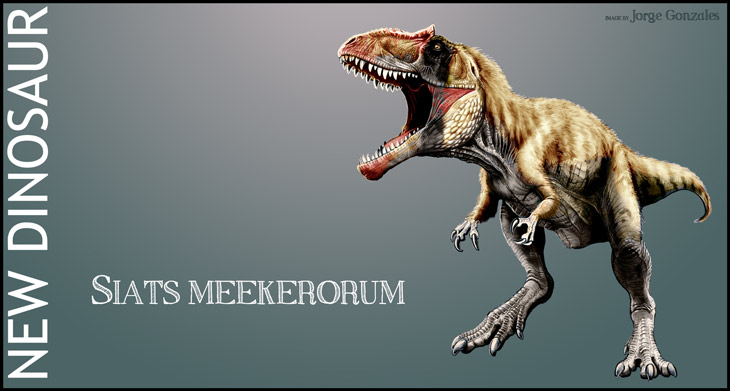 I'm a science writer, filmmaker and host for Untamed Science. If it's quirky or adventurous science, I'm all over it. While my past study species have included bryophytes and leeches, my current passions are in the white squirrel phenomenon, trees, and earth science. I'm also married to Stone Age Man.