Gluten and You! Should you have a gluten free diet!
MENU Skip to content

If you’ve been in a grocery store or a restaurant at all in the past few years, chances are you’ve noticed more and more products being labeled “gluten-free.” Lately, gluten has been getting a bad rap, and for a potentially good cause: some people do have legitimate health problems when they eat gluten and need to avoid it.

But thanks to a series of celebrity endorsements, gluten-free diets are the new big trend. If you believe celebrities (the same people who brought you the likes of alkaline dieting and vitamin IV drips for hangovers), a gluten-free diet apparently cures everything from acne to Sasquatch infestations.

But what is gluten really? How does it actually interact in our digestive systems? Does it really benefit people to be on gluten-free diets?

Why is gluten important?

Gluten isn’t some big bad wolf coming to get you. It’s a natural plant storage substance composed of two proteins—glutenin and gliadin. Some grain-producing plants, like wheat, produce gluten in the seeds as an energy-storage mechanism for future seedlings, allowing them to grow until they can take off and photosynthesize on their own.

For humans, though, gluten serves very little function. In fact, gluten is mostly indigestible, meaning we don’t even get any nutrients from it at all! But it’s not the gluten itself that is important to our diets, it’s the stuff that comes along with the gluten.

Gluten is just a component of whole grains, which are generally very healthy things to consume. Whole grains contain all kinds of things you need in your diet to stay healthy, like fiber, vitamins, and minerals. In fact, people who are on very strict gluten-free diets really struggle to replace all of the nutrients that we take for granted everyday with our gluten-inclusive diets.

And, if nothing else, gluten is responsible for a lot of the texture and even flavor of many of our foods. You can even see (and taste) the effect of gluten when you bake bread. 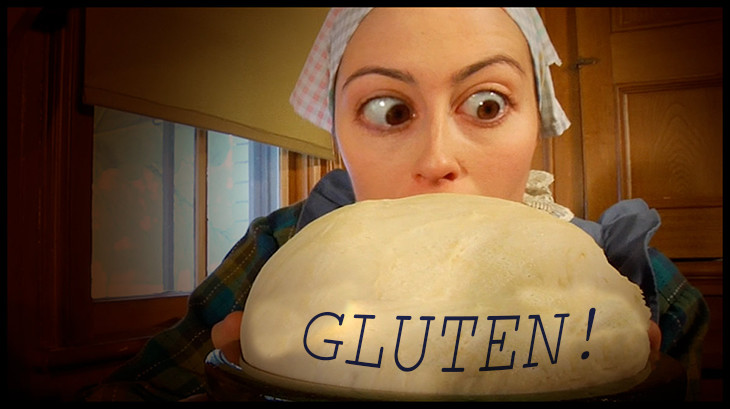 Why can’t some people tolerate gluten?

There are three diseases associated with gluten that require people to adopt gluten-free diets. Each disease has its own unique method of action, symptoms, and ways to cause a person’s health to go haywire.

The most serious disease associated with eating gluten is celiac disease. This illness causes a lot of problems—it has over 200 different symptoms. Celiac disease is an autoimmune disease, and when someone eats gluten-containing foods, the body mounts an immune reaction to its own enterocytes—cells lining the digestive tract.

These enterocytes are gradually killed off, and the villi lining the small intestine shrink back and disappear. Without villi and enterocytes, it’s difficult or impossible to absorb nutrients, and if left uncorrected, a person suffering from celiac disease may become malnourished.

Wheat allergies are another potential problem. Unlike celiac disease, wheat allergies are just that—an allergy. They don’t cause the body to attack itself; they have more traditional symptoms like swelling of the mouth, hives, watery eyes, etc.

The short answer is yes and no. For people who have legitimate health conditions—celiac disease, wheat allergies, or gluten sensitivities—these diets are not just a fad but a restrictive and necessary way of life.

This means a good chunk of the population has legitimate grounds for adopting a gluten-free diet. It’s estimated that 1% of the population suffers from celiac disease, less than 1% from wheat allergies, and anywhere from 0.5%-13% from gluten sensitivity.

Nevertheless, 30% of Americans are actively trying to adopt a gluten-free lifestyle. For most of these people, it’s completely unnecessary as far as scientists can tell. Furthermore, many people believe they have gluten sensitivity when in fact they do not. In one study, doctors tested hundreds of people who thought they had gluten sensitivity, but when they actually tested them, the majority were able to tolerate gluten in their diets just fine.

Adopting a gluten-free diet isn’t without its risks, either. Gluten-free foods are often much more expensive than regular foods. By cutting out whole grains from your diet, you’re also missing out on great sources of fiber and other nutrients necessary to sustain good health. You can get those nutrients elsewhere, of course, but it requires a careful and deliberate plan.

This is why people who have to go on gluten-free diets are strongly urged to work with a dietitian, so they can plan to replace all of the nutrients they’re missing out on when avoiding whole grains and gluten.

Why do so many people report feeling better after cutting out gluten?

It’s common to hear celebrities and people who have voluntarily given up gluten tout the benefits of a gluten-free diet. These people aren’t necessarily lying: they probably do perceive a difference. Why?

Scientists have come up with two plausible explanations. The placebo effect is almost always present in cases like this—if you switch to a new diet and everyone around you is cheering you on and telling you how great it is, you’d probably feel better, too. Secondly, when people cut gluten out of their diets, they often switch from highly processed foods, like cupcakes and white bread, to healthier alternatives, like fruits and vegetables. Of course that would make anyone feel better!

Going gluten-free is a hot trend nowadays, but in general it’s probably best to avoid gluten-free diets unless you have a legitimate, confirmed health condition. If you do think you have problems eating gluten-containing foods, it’s very important to go see your doctor to be tested. Otherwise, you can enjoy healthy, whole-grain foods worry-free!

This article’s content is not intended to be a substitute for professional medical advice, diagnosis, or treatment. Always seek the advice of your physician or other qualified health provider with any questions you may have regarding a medical condition.