The alligator gar truly is a monster freshwater fish. It’s a shark sized ancient fish that inhabits the rivers of the Mississippi river valley. It has a fearsome reputation. They can grow to nearly 7 feet long and weigh several hundred pounds. However, despite their sinister reputation, gar fish are not the man-eaters they were once thought to be.

Alligator gars are primitive ray-finned fishes that have been extirpated from much of their historic range due to habitat destruction and uncontrolled fishing. They now survive in the southern US and Mexico in freshwater and brackish-water swamps, estuaries and bays along the Gulf coast.

This snippet from River Monsters shows the fearsome reputation these fish have had in the south.

For nearly a half-century, alligator gars were considered “trash fish”,[1] or a “nuisance species” that were detrimental to sport fisheries, and therefore targeted for elimination by state and federal authorities in the United States, but the last ten years has seen a greater emphasis placed on the importance of alligator gars to the ecosystems they inhabit. As a result, they were afforded protection by restricted licensing. They are also protected under the Lacey Act which makes it illegal to transport fish in interstate commerce when in violation of state law or regulation. Several state and federal resource agencies are monitoring populations in the wild, and have initiated outreach programs to educate the public. Alligator gars are being cultured in ponds, pools, raceways and tanks by federal hatcheries for mitigation stocking, by universities for research purposes, and in Mexico for consumption.[2] 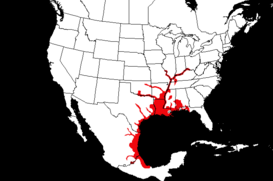