The Field Pumpkin - A Halloween Gourd

For centuries, people have utilized the pumpkin and its relatives. The pumpkin is native to North America; even before Europeans came the Americas, Native Americans were using them as an important food source. The thick skin of the pumpkin could be peeled, pressed, and made into mats. Strips of flesh could be roasted on the fire and eaten. The seeds could also be cooked and ingested.

When Europeans arrived, they saw how native groups were using the pumpkin and quickly began using it as well. Early colonists also brought with them other traditions that took the use of the pumpkin to a whole new level: Jack-o’-lanterns.

The tradition of using pumpkins as Jack-o’-lanterns came from an old Irish story of Stingy Jack. The story gets long and complicated, but the gist of it is that Jack had tricked the Devil multiple times whereby the devil agreed not to take his soul. So, when Jack ended up dying, the Devil was true to his word. But God decided he shouldn’t be in heaven so his soul remained on the earth. He was given only a hot coal to light his way, which he put into a small, carved turnip or gourd. He was remembered every year when people would carve out members of the cucurbitaceae family (cucurbits) and put them on the doorsteps or window ledges.

When the Europeans discovered American pumpkins, they quickly adapted their tradition with the much larger and easily carved gourd. It also became associated with the festival of Halloween.

The traditions associated with Halloween have their roots in the Irish holiday Saween. Saween isn’t a celebration of the Devil or a lord of the dead as some people might think. It was celebrated from the night of October 31st to the evening of November 1st and is most closely related to our modern New Years’ Day. It was a celebration of the year and the harvest. In ancient tradition, carved gourds where put outside the house with coals in them to welcome back dead relatives and warn off Stingy Jack.

“Pumpkin” is just another name for Orange Squash

It’s common for more than one species to be described with the same common name. For instance, the colloquial term “banana” is used for more than one species found throughout the tropics. Most Americans see only one of these species, but there are actually many more. What we call pumpkins are phenotypically orange individuals from the following four species: C. pepo, C. maxima, C. mixta, and C. moschata.

The most difficult concept to grasp, however, is that each of these species has also been domestically bred into different forms to the point that we wouldn’t even call them pumpkins. Zucchinis, for instance, are the same species as the common pumpkin, C. pepo. We wouldn’t mistake a zucchini for a pumpkin would we? Thus, pumpkin is really a term used to describe a characteristically orange, squash-like gourd.

What about Giant Pumpkins?

Giant pumpkins aren’t the same species as the common pumpkin you find every year for sale at Halloween. The species is C. maxima and the largest ones are especially “helped” along. The kind of giant pumpkins that win competitions take special care. First, it is important that the prize pumpkin is getting its supply of nutrients without having to compete with others on the same plant. Thus, once a pumpkin starts, the other flowers are pruned off. But, the pumpkin mania doesn’t stop there.

Special fertilizers are added to the soil and lotions are even rubbed on the outside of the pumpkin. The trick though is to make sure the pumpkins grow fast but not too fast. If they grow too large, too quickly, the pumpkin will cave in on itself. 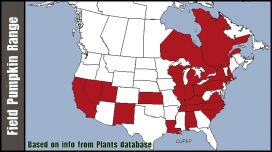