A General Overview of the Coyote

The coyote is one of six species of extant (currently living) members of the genus Canis, which includes the gray and Ethiopian wolves, the coyote, and three species of jackals. Coyotes are a medium-sized canid (typical adults weigh between 25 and 35 pounds) similar in resemblance to a domestic German shepherd.

Historically, coyotes were a plains species and inhabited much of the central and middle portions of North America prior to European settlement. As settlers moved west, they cleared forested land for agriculture, causing major habitat fragmentation. This was good for coyotes in many ways: it removed the main predators of coyotes (brown bears, wolves, and pumas) from much of the landscape, and it created more edge habitat which increased populations of small mammals, providing an increased prey base. 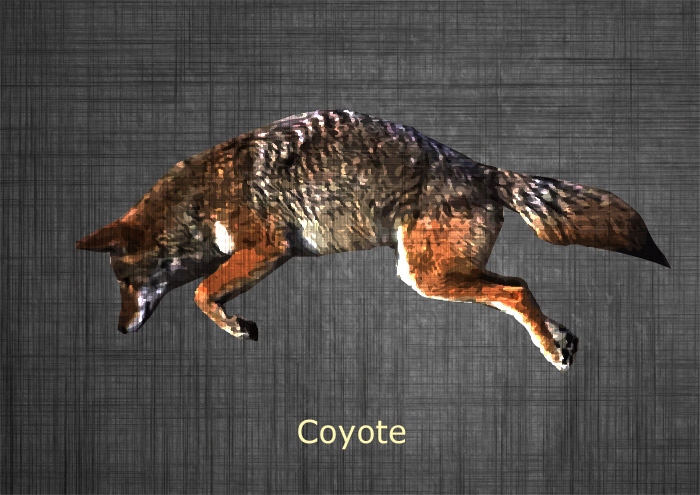 Coyote behavior and social interactions vary greatly with season and geographic region. For the most part coyotes are diurnal or crepuscular (active at dawn and dusk), but have more nocturnal habits where they reside in close proximity to humans.

Coyotes are highly vocal animals and have a repertoire of barks, yips, howls, and yelps that they use to communicate with each other. Vocalizations are most often performed at dusk or during the night and are most common during the breeding season when animals are seeking potential mates and in the fall when subadults are establishing territories.

The Ultimate Model of Versatility

The coyote is a highly adaptable canid whose versatility has allowed it to occupy a wide range of niches throughout North and Central America. Although they are classified as carnivores, their food habits are quite omnivorous; their diet consists of rodents, rabbits, amphibians and reptiles, birds, eggs, insects, invertebrates, fruit and vegetative matter, deer, carrion… pretty much anything they can find! The generalist habits of the coyote have allowed it to be successful in a variety of habitats from desert to tundra and everything in between.

Coyotes are semi-social animals; they can be solitary, or form traveling pairs or packs (kind of the midway between solitary foxes and pack-forming wolves). Social habits vary depending on geographic area; for example, animals that live at northern latitudes tend to coalesce into packs in order to bring down larger prey like ungulates (especially in the winter when other prey are scarce), whereas animals that live in the desert tend to be solitary hunters, pursuing smaller prey like rabbits and rodents.

Coyotes evolved from a wolf-like canid in North America during the Pleistocene epoch almost 2 million years ago. Since then, they have adapted to survive in just about every North American ecosystem there is. There are currently 19 recognized subspecies of the coyote, many of them specific to certain habitats and geographic areas.

Another reason for so much variation in coyotes is due to their ability to hybridize with closely-related canids. Coyotes can produce viable offspring with wolves as well as domestic dogs. These hybrids have a greater amount of genetic variability than ‘purebred’ coyotes and introduce a vast amount of diversity into the reproducing population. In fact, hybridization and introgression (mixing) of coyote genes into the red wolf genome has sufficiently contaminated the genetic identity of the red wolf enough to question its integrity as a valid species.

The main reason coyotes have been so successful in their generalist ways is their ability to adapt, namely to changes in the environment. This includes changes imposed by humans. In addition to a wide variety of natural landscapes, coyotes also inhabit urban and suburban areas. Animals living in these areas tend to change their activity patterns to being active at night to avoid contact with humans. Populations that have been exploited by hunters compensate for losses by having larger litters of pups. Unlike their close relative the gray wolf, whose populations have decreased since the time of human settlement and expansion in North America, coyote populations have grown tremendously in the wake of modern urbanization. 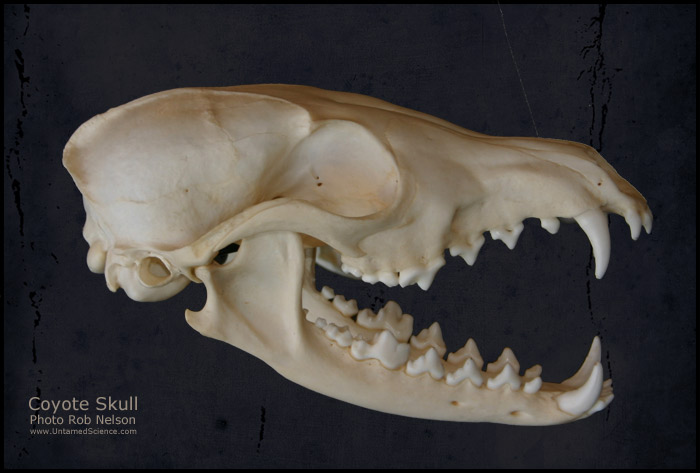 Coyotes are seasonally monogamous, which means they retain the same breeding partner for a given breeding season (and sometimes multiple, consecutive seasons). Females typically have one litter per year with great variation in size, but usually 4-6 pups on average. Gestation is approximately 60 days and pups are born blind and helpless, but grow quickly and are fully weaned by 35 days. Both parents participate in caring for the young and will take turns hunting and regurgitate food to feed them. Pups reach adult size between 9 and 12 months and are sexually mature at one year. Depending on a variety of environmental conditions the young may disperse in late autumn or remain with the mother until the following spring.

In recent years, populations of coyotes have expanded vastly and coyotes have become a regular denizen of urban and suburban areas. They have a higher tolerance for human activity than other mesocarnivores (medium-sized carnivores), and are able to exploit these resource-rich habitats. This can be dangerous however, as coyotes that become habituated to human presence tend to lose their fear of humans. This can result in coyotes predating domestic animals and negative coyote-human interactions. While coyote attacks on humans are rare, they are increasing in frequency and are a threat to human health and safety.

A short video about Coyote Management

Links to more information on Coyotes

A personal experience with coyotes from the author, Erica Santana

In 2007 Erica began work on a project aimed at exploring the food habits of coyotes in east-central Alabama as a part of a joint study on the ecology of urban coyotes. Her research entailed collecting scat samples of coyotes in landscapes that had differential human activity and development: urban, exurban, and rural areas. Using specimen reference collections and microscopic hair identification, Erica was able to identify the items that coyotes had consumed by examining their scat. She was able to reconstruct the diet of animals occupying the three differing areas of human development and assess differences in the diet along a gradient from urban to rural habitats.

Coyotes are opportunistic, generalist omnivores that consume a wide variety of foods based on what is seasonally and locally available in the areas where they live. Their diet is also supplemented by anthropogenic resources- foods that are provided by humans. It is believed that coyotes exploit urban and exurban areas in search of anthropogenic foods, and that animals living in close proximity to humans consume more anthropogenic foods than natural foods. Some studies have shown this to be true in highly urban areas, but none so far have proved that coyote activity in populated places is definitely due to the consumption of anthropogenic food.

Two of her fellow graduate students were conducting studies on urban coyotes as well. One student was studying space use and habitat selection in an attempt to categorize the spatial movements and activity patterns of coyotes along the urban-rural gradient, and the other was examining the genetic relatedness of animals residing in the same geographic area to see if animals inhabiting more developed areas were closely related to each other and if there was any genetic separation between rural and urban animals.

The goal of the project was to combine this information and gain a clearer understanding of coyotes in the southeast, especially animals that live in close proximity to humans. By understanding their behavior and ecology, wildlife managers can develop effective ways to manage populations living in developed areas to ensure safe cohabitation of coyotes and humans. 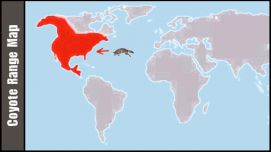