A Starfish of Outbreaks

Acanthaster planci is known as the Crown of Thorns Starfish. This sea star is an organism that has caused great concern all over the world, particularly in the South Pacific. The Great Barrier Reef has had crown of thorns outbreaks roughly every thirteen years since they were first discovered earlier this century. When the starfish come into a reef ecosystem in these plague proportions, they feed so heavily on corals that they can completely destroy a reef. 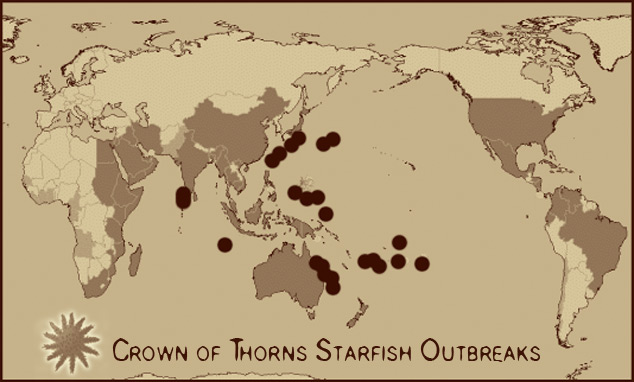 Even today, scientists debate whether these outbreaks are a naturally occuring phenomenon or if they are caused by human influences. There is concern that these outbreaks may be the result of added nutrients to the ocean from terrestrial sources such as agriculture and waste management.

An Interesting ‘MicroDoc’ Video from Micronesia

Accounts from the Untamed Science Crew

Rob Nelson: “In 1999, when I was studying marine biology at James Cook University in Queensland, Australia, I had the opportunity to be a Crown-of-Thorns eradication specialist.  Basically, I got to go on a giant catamaran full of tourists out to Kelso Reef (50 miles offshore from Townsville), and while I was diving I’d take care of any starfish I saw. The tour company was worried the outbreak would completely destroy their local reef so we worked to control the population. On any one dive we might get 150 or more starfishes. The most humane way of killing a starfish was with sodium bisulphate, injected into 3 spots on the starfish crown. This chemical disrupts their nervous system, and they die quickly.

My main concern with the operation was that now we were acting as a secondary human influence on a population overgrowth that we did not know was human-caused. I understood that the goal on this reef was to save the existing reef community. I would have been sad to see such a beautiful reef destroyed, even if it was a natural process. In any case, the tour company could not save all the reefs. This was one of many patches of reef in the chain, the rest of which we allowed the starfish to feed upon.”