Death adders are a highly venomous, cryptic, nocturnal snake which occurs throughout most of Australia and Papua New Guinea, including offshore islands. Before the development of Death Adder antivenom in Australia in 1958, death from envenomation was estimated to be ~50%.

The following video highlights the habitat and ecology of the common death adder as well as highlighting some of the important research being done to help with the human-wildlife conflict. We hope it serves as a good introduction. Further info is below.

The venom from Death Adders is mostly neurotoxic, eventually leading to a loss of control in the voluntary muscular system via post-synaptic blockage of neuromuscular transmission. This then can result in respiratory failure (asphyxiation) and therefore death unless assisted breathing is given. Clinical symptoms from death adder envenomation include paralysis of extra ocular muscles, abdominal pain, headache, drowsiness, and enlargement of regional lymph nodes.

Venom is very energetically expensive to produce and is not always injected with a bite. Dry bites are regularly reported with death adders, with snakebite victims not showing any symptoms nor requiring any antivenom. This illustrates the point that these bits are ‘warning bites’ and that venom injection is a voluntary action chosen by the snake depending on the perceived level of threat.

With an average fang length of 6.22mm and being a high venom yielder, combined with the fact they are nocturnal and cryptic, death adders are considered highly dangerous to co-inhabiting humans or their pets. When dogs are bitten by death adders, their back legs go limp, and the paralysis works its ways to the lungs, eventually killing the victim. Unfortunately, dogs only live on average 20 minutes after symptoms are seen (pers. comm., Magnetic Island Veterinarian), and that is regardless of antivenom treatment (which can cost thousands of dollars). Treating the dog prior to symptoms showing gives the dog the best chance for their survival.

Within Australia, death adders are an outlier among all other venomous snakes. Whereas other venomous snakes in Australia are active foragers, death adders are a sit-and-wait ambush predator. Their reluctance to retreat has even led to their alternative name of ‘deaf adder’ based on the misled belief they cannot hear approaching humans. (No snakes have external ears, but they do pick up on ground vibrations).

When in danger, camouflaged critters remain motionless for safety. Their first line of defense against predators is to not be detected in the first place. The broken color pattern of the death adder suits this approach, and burrowing beneath the leaf litter renders them impossible to spot sometimes. This fact makes them a hazard to bush walkers or land workers, but also one of the easiest snakes to handle for professional snake handlers.

The body shape of the death adder is distinctive. While the bodies of other elapid (Elapidae) snakes are slender and long, that of death adders is broad and short. Whilst its musculature is not designed for quick escape, they are thought to be one of the fastest striking snakes in the world. This unusual body shape, combined with a triangular head, thin neck, and thin tail give it a viper-like appearance (image below). This morphologic similarity and ecology with vipers (Viperidae) suggests convergent evolution, despite the genetic dissimilarity of being in two different families. That is, while these two groups of snakes are not closely related, they independently arrived at similar foraging modes and thus similar body shapes to suit these needs.

Though very little is known about their ecology, anecdotal evidence suggests they stay put for months on end. But then, presumably triggered by some environmental cues, they’re on the move. When this time comes, they can be seen crossing roads on warm nights and even turning up in peoples’ houses.

Large death adders are eaten by large lizards called Goannas or Varanids (Varanidae). Small death adders are probably taken by a number of predators, including Kookaburra birds. While other birds may not prey on death adders, that does not mean that they won’t try to kill them (probably in a misled effort to protect their nest (death adders don’t predate nests)). A Currawong was once seen repeatedly swooping an exposed death adder and pecking at its head until, only after few minutes, the adder lay lifeless with a hole in the top of its head.

The main prey of death adders is skinks, then frogs and mammals (Shine et al. 2014). Unlike the Green Tree Python (Morelia viridis), which hangs from a vine or a small branch with its head near the ground above a rodent trail to catch its prey, the death adder hunt using a different form of ambush: caudal luring.

The often vertically-compressed tail with very small scales is waved and wiggled like a worm to lure prey. When hunting, the death adder places the lure near its head, while the rest of its body is submerged in the leaf litter. The unsuspecting ‘worm’ predator quickly becomes the prey.

Most Australians never see a death adder in the wild. Unbeknownst to them, they probably walked past them in the bush on many occasions. However, for some unknown reason, some towns or suburbs (e.g. Magnetic Island), experience high encounter rates with these snakes. It is important for residents in these areas to be aware of this hazard and to train their pets to stay away from snakes and not bite them, as this is of course when the snake will defend itself by biting. People in high-risk zones should also be extra careful at night when walking around: a torch should always be used to watch your step, cats should remain inside (this also protects local wildlife from these non-native predators), and dogs should be watched when outside for a pee.

While persecution by people threatens death adders in some regions, another major threat to their survival is the poisonous, feral cane toad (Bufo marinus). Curiously, some death adder populations increased after the arrival of the cane toad, while others experience massive declines. The mechanism for these phenomena are unknown.

While the Northern Death Adder (Acanthophis praelongus) is listed as Least Concern under the EPBC Act, the Common Death Adder (A. antarcticus) is listed as Vulnerable. While they are a hazard, just as sharks and bears are, death adders play an important role as a top predator in the environment. Small changes in people’s behavior in high-risk zones can greatly reduce their risk of envenomation and allow them to live more harmoniously alongside Australia’s top ambush predator.

In an effort to make this article easier to read, we have dropped the standard scientific citation protocol and elected to reference all articles via hyperlinks. The links above go to these scientific articles.

I am a wildlife biologist who specializes in conservation biology fieldwork in remote tropical regions. My core research interests include Palm Cockatoos, bird vocalizations, and more recently Death Adders and venom/antivenom. 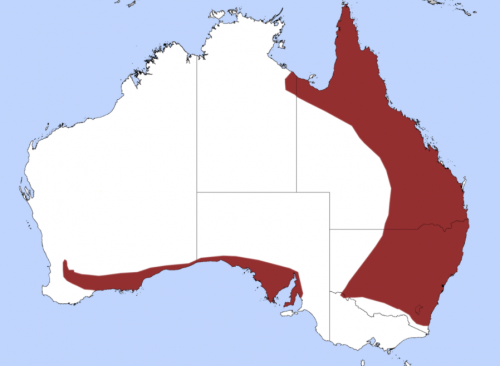