The Eastern rat snake, also sometimes referred to as the black rat snake, is a common inhabitant of the deciduous forests of the eastern US. Other than the rare indigo snake, it is the largest snake in its range. Full grown rat snakes have few predators other than humans.

Where is the rat snake found?

The Eastern rat snake ranges from New England south to Florida and west to Texas and Minnesota. It is found commonly in wooded habitats, such as deciduous and pine forests. It can also be found in river floodplains, rocky hillsides, farmlands, and open fields. They often find their way under houses or into barns where they’ll feed on the resident rodent population. As the above video shows, they’re also very adept at climbing high into trees.

The species most commonly mistaken for the rat snake are black racers. The image below is of a southern black racer, which are generally smoother in appearance and faster on the ground than rat snakes. Notice the scales around the mouth. In racers the white patch is confined to the chin. You can see small differences in this closeup photo. Rat snakes also have keeled scales, meaning their scales have a ridge down the center of them (which may or may not extend to the tip). This makes them rougher to the touch.

There is quite a large color variation that you can find in eastern rat snakes. They’ll range from totally black to grey with black patches.

What does the Eastern rat snake eat?

The Eastern rat snake is listed as as species of least concern. They’re one of the most abundant snakes in the central and eastern US. However, that doesn’t mean they’re free from any danger. Like all snakes, they’re affected by roads, where many of them are killed. They are also in danger because of habitat loss throughout their range. Fortunately they are well adapted to find mice and rats in and around dwellings. 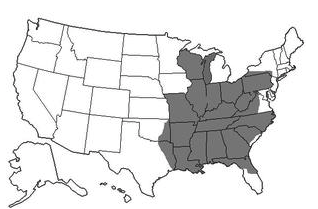