The Fly Agaric, Amanita muscaria, is one of the most recognizable mushrooms in the world even if most people have no idea what you’re supposed to call it. People have seen it depicted in drawings and video games their entire life. (The Mario World games depict a red and white spotted mushroom that helps them grow bigger, no doubt a nod to the hallucinogenic Fly Agaric.)

Still, this mushroom is one of the most influential mushrooms in all of mankind. Some have even considered it the original Soma, the inspiration for the Hindu religion. To understand this, you have to understand the entire mushroom. That’s why we’ve listed it among the top 25 mushrooms to know.

Where is the fly agaric found?

Today the Fly Agaric is a circumglobal fungi. Some authors claim that this species was introduced to South America and Africa through the timber industries. While this could very well be true, it does seem hard to validate the claim. It is most common in areas where it can grow with its host trees: pines and birches. Yet, it will grow occasionally with other trees. It already had a distribution in the northern hemisphere, particularly abundant in Siberia, northern Europe and North America.

Identification of the Fly Agaric Mushroom

Cap: Immature caps are globose to hemispherical. Later in life they are plate-like. They can reach 8-20 cm in diameter. They are generally bright red with white “warts.” These are the remnants of the universal veil. The red color of the cap can fade with age. Some subspecies are more yellow to almost white.
Gills: The gills are free and white.
Spores: Spores are white. They do not turn blue with iodine.
Stipe: White, 5-20 cm high by 1-2 cm wide. It has a slightly brittle, fibrous texture. At the base of the stipe is a bulb that bears the universal veil remnants in the form of two to four distinct rings or ruffs. Along the stem there should also be remnants of the partial viel. These look like a ring around the stem.
Taste: Better not taste it. There are many mixed reports. Some say it tastes like chicken. Others say it tastes like fish snacks.
Odor: No associated smell other than mild earthiness

Is it poisonous or hallucinogenic?

One question that often pops up when talking about Fly Agaric is its potential as a hallucinogen. Many books list this species simply as a poisonous amanita and give no time to its historical or present use as a mind-altering compound. Truth be told, it is poisonous at certain doses. Some people have proposed a lethal dose closer to 15 caps. There are almost no substantiated deaths though. But, it is also a psychotropic mushroom if taken in the right quantities. We are not promoting the use of this mushroom and should explain that it doesn’t provide the greatest trip. However, should you want to use it, we provide information on preparing Amanita muscaria here.

Books and Other Resources

A Fly Agaric – The Misunderstood Mushroom 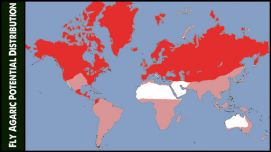