No, Gharials are not crocodiles per se, but they are in the Crocodilian order. The Order Crocodilia is divided up into Crocodiles, Alligators, and Gharials. There are only two living species of gharial and both live in India and the Malayan peninsula. This particular species, known simply as the gharial or Indian gavial, is one of three crocodilians found in India. It is also one of the largest reptilian carnivores in the world. Luckily for the inhabitants of the surrounding area, it does not prey on humans!

The Gharial is found in India. Even within India however, it is critically endangered, meaning its on the brink of extinction.

How Long Does the Gharial Live?

The gharial is one of the longest living crocodilians in the world; it can survive for 50 to 60 years. 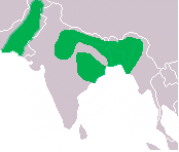