In old B movies, the green iguana often played the dinosaur. Its look is somewhat archaic and the gleam of its eyes appears prehistoric. Yet the green iguana is a modern survivor. It has many adaptations that have suited it well to living in tropical rainforests.

Where does the Green Iguana live?

Green Iguanas (Iguana iguana) are native to Central and South America although they have been introduced to many other areas such as south Florida, Hawaii, and south Texas. Its favorite habitat is high in the trees of the tropical rainforests. Most of the time it prefers trees over water, where it can plummet if threatened.

How big are Green Iguanas?

In general, green iguanas will grow to 1.5 meters (head to tail) although some specimens have been measured at almost 7 feet (just over 2 meters). As for weight, most never get more than 20 pounds.

What do Green Iguanas eat?

The favorite diet for green iguanas is plant material. They’ll eat tasty leaves, lettuce, fruits and vegetables. At the reserve in Roatan their favorite food is ripe bananas. We also saw them eating different gourds and squash. Iguanas do eat some meat if given the chance, though; they will occasionally eat a baby chicken if given the chance. If you have an iguana you should read this short article on: Caring for your Iguana. 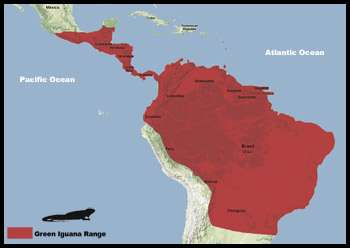