With a name like “leopard shark,” (Triakis semifasciata) you might think that these animals would be fearsome brutes. Many people are afraid of bull sharks and tiger sharks, after all. Don’t let the name fool you though—these pint-sized beauties actually pose almost no danger to people, even if they might mistake you for a snack.

Instead, these are one of the most common shark species you’re likely to come across if you live on the West coast of North America. Seeing them would be a real treat. Read on for more fun facts about leopard sharks!

Leopard Sharks: The Gems of The Shark World

Leopard sharks are one of the prettiest shark species you might meet. They’re a small species (especially compared to more familiar sharks like the whale shark or the Great White shark), reaching a maximum of seven feet long from tip of the snout to the tail. Most sharks of this species, however, aren’t longer than five or six feet.

Leopard sharks have a very long, narrow body with a flattened head. They have an odd-shaped tail, with the top part being much longer than the bottom part.

They are gray in color, but all along the back are dark grayish-black saddles that fade into smaller dots as you move towards the belly. The middles of these dots and saddles are lighter in color, much like how a leopard’s spots are lighter in the middle.

Where can you find leopard sharks?

If you live on the West coast of North America—anywhere between Washington and Mexico—there’s a good chance that there are tens or hundreds of leopard sharks swimming somewhere near you right now.

Leopard sharks prefer shallower waters than their open-ocean brethren (like the mako shark or whale shark). They love cruising around kelp forests, and will even come in and out with the tide, searching for tasty morsels like crabs, small fish, and even clam siphons sticking up above the ocean floor. Small leopard sharks can be found in as little as a foot of water, so don’t be surprised if you come across one while wading!

Leopard sharks often form schools with other leopard sharks and even other shark species of similar size (if they’re too small, they might become a snack!). They tend to stay put in whatever region they’re born in, although every now and then a spritely leopard shark will feel a bit adventurous and head off to a new location up to several hundred miles away. But in general, their staying put makes it easier for biologists to track and manage these sharks because they aren’t constantly flip-flopping between different countries with different management rules.

Where do baby leopard sharks come from?

Sharks are generally slow breeders, and leopard sharks fit that bill—sort of. It takes between 10 and 15 years for a female leopard shark to reach sexual maturity, and they only live for a maximum of 25-30 years anyway. They spend up to half their life just getting ready to breed.

But get ready—once they start breeding, they can really crank pups out! Female leopard sharks will give birth from anywhere between seven and 36 pups every year. They even have been known to spend time in warmer waters that help speed up pup development in utero. (Imagine if people could just spend all day in a hot yoga room and give birth in eight months instead of nine!)

Female leopard sharks give birth to their fully-formed pups in shallow waters known as nurseries, safe from predators. After dropping off their pups at the nursery, they head right back out to breed and get busy making the next generation of pups. 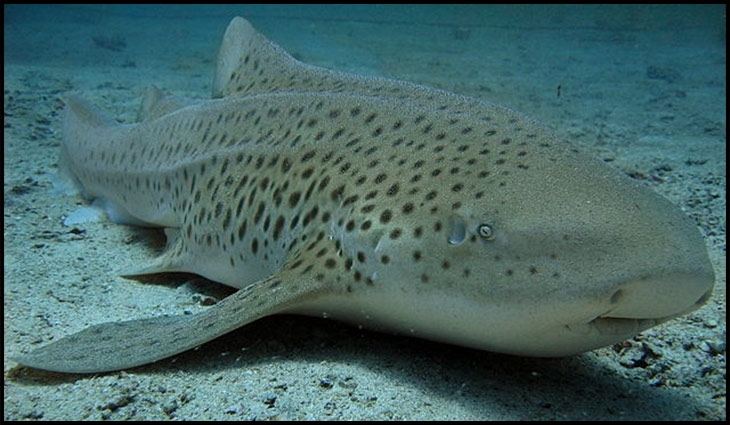 What are the main threats to leopard sharks?

Luckily, leopard sharks are a conservation success story. Their homebody habits, huge litters of pups, high population sizes, and limited human harvesting make them a species of Least Concern by the IUCN.

Some by-catch of leopard sharks in commercial fisheries also occurs, however this isn’t considered as large a concern. Surprisingly, little leopard sharks are also targets for another unique fishery—the aquarium trade. Baby leopard sharks can fit inside large aquariums, and they make popular pets because they survive easily in an aquarium environment (at least, more easily than other species), and again, because they’re so unique-looking and easy to catch.

Finally, leopard sharks can be vulnerable to changes in local water conditions. Remember how they don’t move around much? Sometimes that habit can come back to bite them. There have been several large leopard shark die-offs due to eutrophication: when nutrients (probably from agricultural fertilizer) flow into bays, they cause algal blooms that suck up all the oxygen in the water, essentially suffocating the sharks. Even as recently as May 2017, San Francisco Bay itself has seen large leopard shark die-offs, likely from a mysterious brain fungal infection.

Although these scenarios sound scary, rest assured that right now the entire leopard shark population is doing just fine. With continued monitoring and conservation efforts, these sharks will be around for a long time to come.