The scientific name elegans means elegant. It is a beautiful, flowing plant even though it its highly poisonous. The genus contains plants with alkaloids toxic to both man and livestock. Sheep are frequently affected, since they seem to eat the plants more readily than other animals do. Hogs are said to be immune to the poison. Poisoning usually occurs in early spring because the death camases appear before most other range plants and their succulent leaves are available.

Make sure not to confuse this plant with the true Camas, which formed a stable food for Indians of the Northwest. The flowers are quite different, but Indians did occasionally mistake bulbs of the two, since both plants grow together in meadows. It is difficult to distinguish death camases from onions, sego lilies, fritillaries, and wild hyacinths when the edible plants are only a few inches high. However, a combination of leaf characters and a cross section of the bulbs or corms is diagnostic at any stage in the development of the plants.

Flowers: 3/8 of an inch long, saucer-like, to .75 inches wide, in racemes, with 6 white tepals (petals and sepals that are undifferentiated) and 6 stamen. The flowers are arranged in a raceme (spiraling around a central stalk).
Leaves: Basal, linear, and smooth, with parallel veins
Habitat: Death Camas grows in areas along streams and in forest clearings and meadows from about 6000 to 12000 feet in the mountains. It has a wide distribution from Alaska to New Mexico and from Nevada west to Minnesota. In Colorado it can be found flowering from June to August. 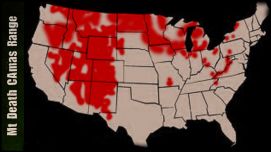