The cat that people think of for high-altitude central Asian habitats is the snow leopard. However, there is another equally important cat for those ecosystems that tends to get overlooked (which is generally the case for small cats). It is the Pallas’s cat, Otocolobus manul. Weighing between 2.2-4.5kg, Pallas’s cats are recognizable by their compact body, short legs, thick coat, fluffy tail, and a bearded, flattened face with an expression that makes Grumpy Cat seem content.

Pallas’s cats inhabit mountains, steppe grasslands, and semi-desert terrain, taking shelter among more structurally complex rock features. Their range includes: western China, Mongolia, India, Pakistan, Tajikistan, Kyrgyzstan, Kazakhstan, and Russia. They can be found at elevations between 3,000-5,000m, sharing their mountain habitat with snow leopards! For small cats, they have quite large territories. Males have a home range of an average of 98 km2 that overlaps with home ranges of females. Females have an average home range of 23 km2. 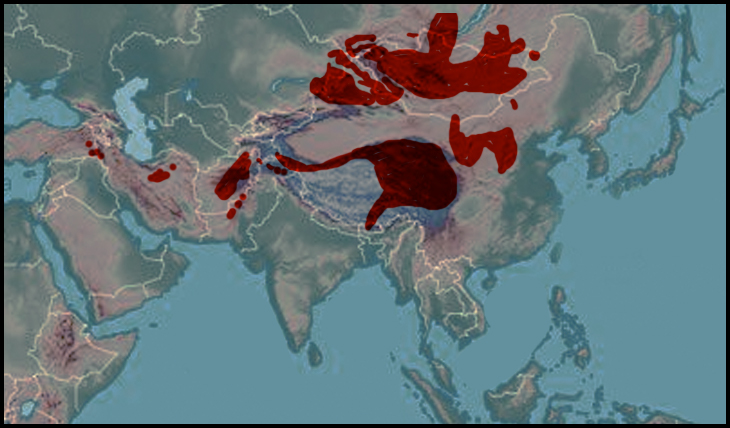 Their thick coats help Pallas’s cats stay warm when winter temperatures drop to -50°C. In summer, they can tolerate temperatures around 38°C, seeking shelter in burrows or crevasses. Because their environment does not have much cover, Pallas’s cats’ grey-tawny coloring helps them blend in with the terrain; in semi-desert habitats, they may have more of a rusty color. A characteristic that all cat species have is a nictitating membrane over their eye, or third eyelid. For Pallas’s cats, this helps to protect against the cold and often-dusty winds of their environment. Their small, closely set ears help them to hide.

This small cat species feeds on a broad range of rodents, birds, insects, reptiles, and even carrion. Since they are not very fast, they must crouch low and get pretty close to their prey before pouncing. To avoid becoming prey themselves—to eagles, wolves, red fox, or dogs—they move in short bursts before lying flat on the ground while foraging. Their foraging activity is highest during dusk and dawn, but they may also hunt during the day. Other meso-carnivores, such as corsac foxes, red foxes, and European badgers, rely on the same food sources as Pallas’s cats. To avoid competitive exclusion, a principle that states species competing for the same resources cannot coexist in the same habitat, they have adapted seasonal foraging behaviors.

In winter, when prey is scarce, Pallas’s cats will actively seek out hibernating or frozen insects. Winter is when badgers hibernate, so they avoid competing for this prey with badgers during this season. During the rest of the year, insects are a major food source for badgers.

Red foxes and corsac foxes prey on the same rodent and bird species as Pallas’s cats during the summer and autumn seasons, but both fox species feed on plant material, such as fruits and seeds, as well. Large mammal remains from carrion is another difference in the diet for red foxes. Since Pallas’s cats do not feed on plant material, they can avoid seasonal dietary overlap.

Similar to other cats that live in harsh environments, Pallas’s cats have an annual breeding season. Pallas’s cats are polygamous, meaning a male will mate with several females. Breeding season is typically between December and early March, with a gestation period lasting an average of 75 days. Litter sizes are usually between 2 and 6 kittens, though some litters have been recorded to have up to 8. Kittens are born between late March and May then will stay in their den for the first two months.

After the kittens are born, the father will have nothing to do with raising them. Once the kittens leave the den, they learn to forage and hunt with their mother until they reach 4-5 months of age. At this point, they are at their adult size and weight and ready to venture off on their own. Around 1 year of age, they become sexually mature and can find their own mates. The average lifespan of a wild Pallas’s cat is approximately 27 months, or a bit over 2 years, due to extreme environmental conditions and a high rate of being preyed upon. In captivity, they have been known to live up to 11.5 years!

Pallas’s cats are listed as Near Threatened on the IUCN Red List.

Habitat loss due to overgrazing livestock and state-sponsored pika-control programs threaten their populations. Pallas’s cats are also hunted for their soft, warm fur and for their fat, the latter of which is used in some Eastern medicines to cure frostbite.

In 2000, Dr. Bariushaa Munkhtsog from the Mongolian Academy of Sciences, and Irbis Mongolia Center, along with Meredith Brown, started the first field study of wild Pallas’s cats. Dr. Munkhtsog has continued to research productivity of Pallas’s cats throughout central Mongolia and is one of the few researchers who is observing breeding females.

The Pallas’s Cat International Conservation Alliance (PICA) is a new conservation and research project initiated by Nordens Ark Zoo, the Royal Zoological Society of Scotland, and Snow Leopard Trust. It is supported by Fondation Segré as a three-year effort that started in March 2016. The mission of PICA is to increase global awareness about Pallas’s cats and build on knowledge of their natural history and threats. Captive populations within accredited zoos will also be bolstered to aid in spreading education about the cats while communicating updates from field projects to the general public. An increased captive population will also help to strengthen the genetic integrity of the species.

Katey Duffey is a wildlife biologist who studies carnivore conservation. She has a M.A. in Zoology from Miami University. Her main interest is in mitigating human-carnivore conflicts.Her research includes snow leopard population surveys, snow leopard / herder interactions, and zoonoses in the mountains of western Mongolia. Projects have been in partnership with Mongolian Academy of Sciences, Irbis Mongolia, Green Initiative NGO, and Duquesne University. 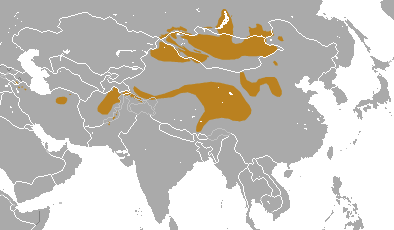