Some people believe the name “porbeagle” (Lamna nasus) comes from a combination of the word “porpoise” with “beagle,” as in the small, playful hunting dog. It’s a great description of this unique shark—but there are far more cool things to learn about it; so let’s dive in!

Sadly, the dog namesake for this shark doesn’t show up in its appearance (how funny would that be?). Rather, it looks like a nondescript gray shark. You can tell it apart from other sharks by a tiny white patch at the base of the backside of its dorsal fin.

Porbeagles are very long (up to 11 ½ feet!) and can weigh up to 300 pounds. They’re sleek and streamlined, but they are pretty thick around the middle compared to most other sharks (too many mackerel, perhaps?).

Where do porbeagle sharks live?

Porbeagles aren’t interested in taking any tropical vacations. Instead, they prefer waters on the chilly side, gravitating to the north and south Atlantic and south Pacific oceans. Weirdly enough, they’re not present at all in the north Pacific, even though it’s cold there. Instead, that area is occupied by a similar species (and a close cousin to the porbeagle) called the Salmon Shark (Lamna ditropis).

Porbeagles tend to cruise along the continental shelves (the area right off the coasts) looking for prey. Female porbeagles will migrate 1,000 miles or more to warmer areas to give birth to around four pups per year (that’s right—porbeagle offspring are called pups, just like actual beagles). It’s about the only time they’ll inhabit warmer waters.

Interestingly, porbeagles don’t mix much with each other. Sharks from the southern hemisphere won’t cross the equator to go visit their northern brothers and sisters. So it’s possible that over time we’ll even see these two sharks—the northern and the southern populations—evolve into separate species!

What do porbeagle sharks eat?

Porbeagles might look big and scary, but they’re mostly harmless to people. They stick to eating fish, smaller sharks, and squid.

In fact, there have only ever been a few documented cases of porbeagles ever attacking people, and none of them were fatal. Most people think the porbeagles did it by accident or were investigating the people (What’s this? Blech. It’s not a fish.).

How do porbeagle sharks behave?

Porbeagles are one of the only shark species known to engage in playful behavior, just like dogs! They’ve been observed pushing floating objects and kelp around and chasing each other. They’re very curious sharks and are likely to come check you or your boat out if you’re in the water. Just to be safe, don’t dip a hand in!

Porbeagles can also swim very fast, as you can see in this awesome underwater video:

One of the reasons that porbeagles can swim so fast is that they’re one of the few sharks that are endothermic—i.e., they’re warm-blooded! Porbeagles have a unique blood vessel network of countercurrent heat exchangers. This traps heat generated by a line of huge red muscles along their back within their body, so it isn’t lost to the chilly waters they like to swim.

Do we need to worry about porbeagle shark conservation?

Porbeagles worldwide are classified as vulnerable to extinction by the IUCN. They’re literally one step away from being endangered. Some countries, like Canada, have even gone even further and listed them as endangered within their waterways.

Remember those big red muscles? It turns out those muscles are quite tasty, and porbeagles themselves are known for putting up quite a fight when people fish for them. This makes them really popular with sport fisherman.

There’s even high commercial demand for them in some parts of the world. Porbeagles are also frequently caught as bycatch when fisherman are targeting other species, and because they’re so valuable, they’re often kept aboard and later sold.

Fishing for sharks isn’t necessarily a bad idea, as long as the fishery is managed and monitored so that the population remains stable. Unfortunately, in some parts of the Northeast Atlantic and the Mediterranean, there is little to no effort to regulate the porbeagle fishery. As a result, porbeagles have almost entirely disappeared from some of these areas.

Porbeagles on the Northwestern Atlantic have fared slightly better because fisheries are now regulated. But, it’ll still takes a long time for them to recover from past population crashes due to overfishing.

We don’t know what will happen to the porbeagles in the future. If we’re careless and allow them to be overfished like they currently are in many areas, it’s possible they’ll go extinct.

That’s why we need more researchers to study porbeagles and other sharks, because you can’t prevent an extinction without good information. An equally important piece of the puzzle is people who can then act on that information to keep porbeagle populations safe.

If we’re able to do that, then we might continue to see playful porbeagles swimming around well into the future! 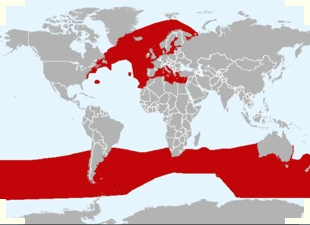