The Pygmy Slow Loris is one of three species of slow lorises that exist today. All are quite rare, and this species is no exception. It’s found in dry tropical forests in Vietnam, Laos, China, and Cambodia. According to scientists at the San Diego Zoo there are about 72,000 species in the wild and as of 2006, 183 in captivity. Lorises are small primates, relatives of apes and monkeys.

Lorises are omnivores that are active at night. They will eat insects, fruits, snails, and small mammals. They live in trees, crawling slowly through the branches and thick leaves. These small primates are very tiny and only weigh about one pound when full grown.

Lorises have relatively slow growth for a small mammal. Gestation for young is about 190 days. After birth newborns stick with their mother for about nine more months. Female lorises reach sexual maturity at around nine months, males between 17 and 20 months.

Other Interesting Videos on Lorises 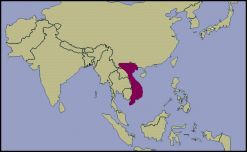