There are few animals in the world that could have man on the menu. A good case could be made that the reticulated python could be one of the few animals in the world that holds the infamous title as a man-eater. I’m not talking about just a man-killer as clearly a few pet owners have fallen victim to these dangerous snakes. I’m talking about a snake that would not only kill a man, but would stick around to feast on their remains. Let’s not have this introductory statement fall into the category of sensationalism for the sake of predator pornography. On the contrary, let’s look deep into the facts and history of this, one of the most impressive of reptiles. How is it possible for these species to both capture and eat large prey, survive in it’s natural environment and become a giant among reptiles?

While it’s not the longest snake to have ever lived – Titanoboa currently takes that trophy. It’s not the heaviest – the anacondas take that prize. The reticulated python holds the record for the world’s longest snake. Biologists tend to agree that this snake could reach lengths of around 30 feet. However, no snake has been officially measured that long.

The genius book of world’s record lists the largest officially measured living snake as Medusa – 7.67 m (25 ft 2 in). It also lists the largest as one caught in Celebes, Indonesia in 1902 at 32.75 feet. Some scientists are skeptical of this historical report though and think the longest ever may be much smaller.

A recent snake was captured in Indonesia in 2016 that was reported at 26 ft. These seem to be about the size limit for these snakes. Measurements over this size should elicit a great deal of skepticism. NBC for example, reported at 49′ snake in Indonesia in 2004. This proved to be completely false. The snake was measured by a reporter a few weeks later at only 21′-23′ (The range is included I’m guessing because it’s really hard to measure a snake that big).

A Man-Eater: Myth or Mistaken Identity?

Most people who breed reticulated pythons will argue against the ‘man eating’ reputation of these snakes. That’s only fair. The more of a reptuation they have as a man-eater, the greater the chances that local governments will want to restrict access to these reptiles. Snake breeders will likely explain that you have to have great respect for them, but that given the right care, they’re great snakes to have. News media will portray their darker side – possibly in an attempt to gain more viewership.

Sensationalism aside, a case can be made that the reticulated python can be, in fact, a man-eater. There have been several reported attacks by wild snakes, deaths from captive animals and in at least one well documented case, proof the best proof we have that a man was actually consumed by a reticulated python (as seen in the video below).

This video was taken of a 23 foot reticulated python that was cut open to reveal the body of a 25 year old farmer – Akbar. Apparently Akbar was working at a palm plantation on the island of Sulawesi. He would have encountered a Sulawesi Reticulated python, a species known for both being extremely large, but also being extremely aggressive. In other words, this may be one of the only pythons capable of eating a man.

So far, this is the only incident ever recorded. If you take into context this one incident, you realize that it really is very rare. After analyzing the incident you may write it off as an accident or a one off mistake from the snake. If you love snakes you may find ways of justifying that this isn’t something snakes like this do. You might even suggest that Akabar could have been at fault by attacking the snake. But, for the sake of Akbar’s family here, let’s not forget that whatever happened, he did fall prey to a giant snake. Clearly Akbar knows only too well the capabilities of one of these large snakes.

The big question for us to consider is, “Are these snakes a problem we should worry about.” My answer to that is no, but not to the extent that we dismiss the capabilities of this creature. It is rare. Most snakes will not attack a human. But, as we can see here, when they reach the upward end of their size range, they do have the ability of attacking, eating and consuming a human. That’s truly impressive. Let’s look in detail at the unique abilities of these magnificent snakes. 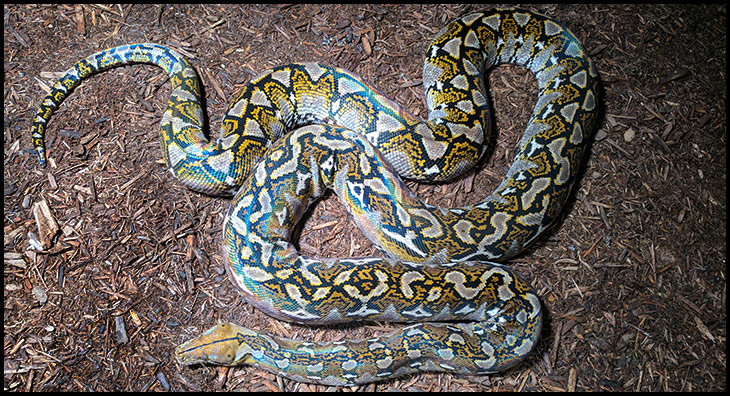 Over millions of years, this pattern has allowed these snakes to hide from their prey. Humans have decent eyesight, but when buried in the leaf litter or curled up in a ball, it’s easy to see how it’d be difficult to see them. While almost every python has an intricate pattern on their backs, the reticulated patterning on these snakes seems particularly good for their semi-aborial life.

Thankfully for snake breeders and those that love to find new patterns, these snakes have the diversity in their genes, that selective breeders have used to create an impressive array of different types. Check out the this assemblage of different reticulated pythons (a detailed list can be found here).

All of these color patterns have come from only a few genetic variations (mutations) in the wild. Namely, albinism and melanism. Here are both the albinistic (lacking melanin, the dark pigment in the skin) and hte melanistic version (dark variety).

Chances are, maybe you’ve witnessed the unique constricting power of a python. Maybe you witnessed a friend feeding a constrictor. Maybe you saw it on the internet, or some tv show. But, take a moment to think about it from a person point of view. Put yourself in those rats shoes – because as we’ve seen, at the upper end of their size range, humans can be on the menu.

From almost all accounts of these constrictors, they are sit and wait predators that are waiting for their prey to come by. We know they have great camouflage, so this may be easier than you think. You may or may not see it slithering up behind you – taking it’s time. It then strikes at just the right time. The strike is quick -faster than you’d expect for an animal of it’s large size. It lunges out with 6 rows of 80 dagger-like backward facing teeth. The angle of the teeth make sure that you’re not getting away.

This is only the beginning of the end. This is where it get’s sketchy. In less than a second, the python gets it’s first coils around you. It twists and spins disorientating you until it has you locked up completely. Keeping the coils off seems to be the key. If you imagined yourself as a rat, that’s probably not possible though. An entangled human may or may not have a chance here if they can think quickly. However, once those coils are around you, and your arms and legs are pinned, there is little chance. It starts constricting.

Reticulated pythons, like boa’s or anacondas, subdue their prey via a process of constriction. They wrap around them and squeeze harder and harder. Originally it was thought that these snakes killed their prey via suffocation – slowly squeezing the breath out of them. The problem is that when you crunch the numbers, this didn’t make a lot of sense. Many of their prey could, in theory, hold their breath for a long time. The limiting factor was the flow of blood to the brain. If these snakes cut that off and quickly, the prey would die much faster. Through a series of brilliant physiological studies we know know that this is, in fact how they kill their prey, by stopping blood flow. It’s a bit like putting a giant tourniquet on your whole body. 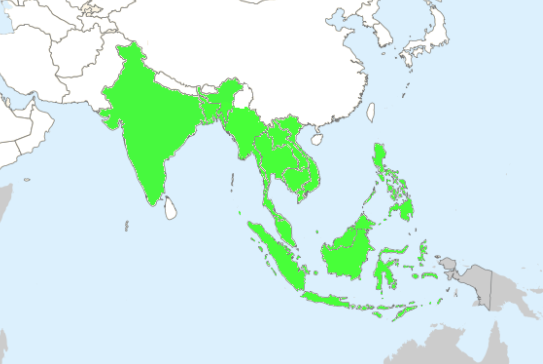