Intro to the Study of Cell Biology

Cell biology (also called cellular biology, formerly cytology from the Greek word kytos meaning “container”) is an academic discipline that studies the physiological properties of cells as well as their structure, organelles, interactions with their environment, their life cycle, division and death. This is done both on a microscopic and molecular level. Cell biology research encompasses both the great diversity of single-celled organisms like bacteria and protozoa, as well as the many specialized cells in multicellular organisms like humans.

Knowing the components of cells and how cells work is fundamental to all biological sciences. Appreciating the similarities and differences between cell types is particularly important to the fields of cell and molecular biology as well as biomedical fields, such as oncology (study of cancer) and developmental biology. These fundamental similarities and differences provide a unifying theme, sometimes allowing the principles learned from studying one cell type to be extrapolated and generalized to other cell types. Hence, cell biology is closely related to genetics, biochemistry, molecular biology and developmental biology.

All living things–humans, plants, animals, fungus–are actually big blobs of cells. Humans are built up of 100 trillion cells! These cells are assembled together into tissues that work as a unit to carry out a specific function. These tissues group together to form organs, such as the skin, heart and kidney.

It is amazing to think that all of the 100 trillion cells in our body are derived from only two original cells, one from our mother and one from our father. This means that even though these incredibly high number of cells have different functions, they all carry the same DNA in their nucleus. The DNA is the heritage from their parents and tells the cell how it should work and function. Essentially the cell is actually a mini-factory and the DNA is its instruction book. 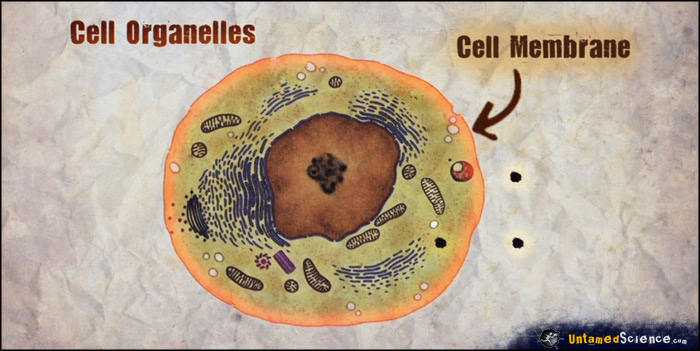 Let us take a second to look at each individual cell organelle in turn.

mitochondrion is the power plant of the cell. The energy that the cell uses for most of its functions is a small molecule called adenosine triphosphate (ATP). The mitochondrian converts glucose and oxygen to carbon dioxide, water, and ATP. This complicated process, called cellular respiration, involves many enzymes. Thanks to the mitochondrion, the cell can achieve 15 times more energy from each sugar unit than it would otherwise!

Apart from all other organelles, the mitochondrion has its own DNA and ribosomes. The genetic code in the mitochondrion DNA is somewhat different from the standard code found in the nucleus-DNA, and it is therefore believed that the mitochondrion evolved from an ancient bacteria that an animal cell engulfed. After millions of years the bacteria evolved into the mitochondrion of today with its primary purpose to contribute to cellular respiration.

All the DNA in your mitochondrion is derived from your mother. Since mitochondrial DNA is inherited as a single unit from your mother, scientists can use it to study the evolutionary history of populations. Mitochondrial DNA gives strong support that modern humans came from Africa. It is also being used to argue that Homo sapiens and Neanderthals were not related enough to interbreed. Mitochondrial DNA, however, reflects the evolutionary history of only females in a population, so it might be possible that men and Neanderthals are more closely related than we might think.

I want to learn more!

The mitochondrion can import both fatty acids (from fats) and pyruvate (from sugars) out of the cytosol and break it down to acetyl CoA, which is oxidized in the matrix via the citric acid cycle. The citric acid cycle converts the carbon atoms in acetyl CoA into CO2, which is released from the cell as a waste product. More importantly, the cycle generates electrons with high energy that are carried by two molecules, NADH and FADH2. These high-energy electrons are then passed along the electron-transport chain in the inner membrane to their final destination, oxygen. During this transport the electrons generate a proton gradient over the inner membrane. This proton gradient drives the production of ATP from ADP and phosphate by the membrane enzyme ATP synthase. (Cool fact: The 1997 Nobel Prize in Chemistry  was given to the team that discovered ATP synthase.)

are small digesting machines. They are vesicles filled with enzymes that break down the food we eat into smaller pieces. The food has to be broken down for the cell to use it as an energy source or for the cell to be able to build larger molecules and organelles. The lysosomes can also recycle old, out-of-order organelles and build new fresh organelles out of the old parts. Lysosomes are also really good bodyguards for the cell since they can break down dangerous invading bacteria and viruses.

There are many different enzymes in the lysosome that together are able to break down almost everything! Basically, the lysosomes import the things it want to digest from the cytosol, and when it is inside of the vesicle it will be broken down into small pieces. In chemistry language: large polymers are broken down to monomer subunits.

Think of it as a pearl necklace! Each pearl on the necklace is a monomer, and when they are linked together they form a long chain, a polymer. What the lysosome does is separates all the pearls (the monomers) from the necklace so they are free.

I want to learn more!

There about 40 different enzymes in the lysosome, including lipases that can digest fats into fatty acids, amylases that digest carbohydrates to sugars, and proteases that digest proteins into amino acids. When the lysosome has finished its digestion, it releases its final products into the cytosol where the molecules can either be utilized by the cell or excreted out of the cell.

For the lysosome to be able to keep the pH at 5 (the  ideal pH for the enzymes) it has pumps in the membrane that actively import protons from the cytosol, which makes the solution acidic.

nucleus is surrounded by a double membrane called the nuclear envelope. Inside the nucleus are long strands of DNA. The role of the nucleus is to maintain the integrity of the genes in the DNA and to control the activities of the cell. So the nucleus is the control center for the entire cell!

cell membrane separates the inside of the cell from the outer environment. The membrane is selectively permeable, meaning that it can control what enters and leaves the cell. The membrane is basically made up of a double layer of lipids called the phospholipid bilayer. These lipids are hydrophilic on one side and hydrophobic on the other.

The Golgi Apparatus, sometimes called the Golgi body, processes and packages macromolecules, like proteins and lipids. It is particularly important in the processing of proteins for secretion.

The BozemanBiology YouTube channel has lots of videos about cell biology. They are produced in our home town of Bozeman, Montana.