Adaptations of Dolphins and Whales

Cetaceans and the ocean 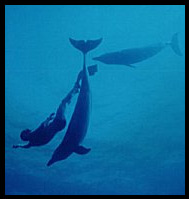 What is it then that made these aquatic mammals so superior in the water? Let’s start by making a comparison with humans.

The world record in free diving is currently 171m in the No-Limit category. This means that a weight is used to sink the diver and an air balloon to pull the diver back up. The total time spent under water during such dives is normally between 2-3 minutes. A marine mammal can break these records within their first living months…

The human world record in static apnea, (laying still under water), is a good 8 minutes 58 seconds for men and 6 minutes 31 seconds for women, which is certainly not bad and gives us an idea of what the
human body is really capable of with practice.

So what really makes these animals so adapted
to this aquatic lifestyle?

Let’s now look at the problems of living in water. Water, as a
medium, is obviously denser than air. When an object moves in water a
friction, or drag, is created. The more surface area to the object, the
more drag, which in turn slows the object down. The drag is reduced by
having fewer appendages that stick out. Cetaceans have evolved
a slim-lined body shape with, for example, no hindlegs, no external
ears, and no external genitals, all to make the body more adapted to move
in water. One would think that a large animal like a whale would have
a great surface area, which we mentioned before would increase the drag.
In fact, in relation to its volume, the whale has a relatively
small surface area. Small plankton actually have a greater surface
area to volume ration, which makes them move in water almost like we would
in honey!

Therefore, being a large creature like a whale is more energy efficient
in the water.

Cetaceans also lack hair as adults. Since they are mammals,
they usually have hairs as newborns but this is generally lost as the
animal grows. Instead the cetacean skin is smooth and leathery, again
making it well adapted for movement in water.

Whales and dolphins move by undulating movements of their tail-fin. We
can compare this to the movement of a cat when it accelerates and runs.
The vertebrae curve vertically in a similar fashion as the hind legs are
moved forward in a recovery stroke and then pushes the animal forward
in the power stroke. The development of the whale tail fluke eventually
made the movement more like that of airplanes. The fins work as a hydrofoil
giving the animal a lifting force as it swims forward.

The most noticeable problem for a mammal in an aquatic world would is
being able to stay submerged for long periods of time. One would guess
a whales’ lung capacity to be enormous in order to be able to deliver
oxygen to the whole animal during the whole time it stays under water. In fact, the whale lung isn’t really that big compared to
the size of the animal. Truth is, these animals don’t WANT
extremely large lungs. This is to minimize the risk of problems caused
by dissolved gases in the body, essentially nitrogen.

Gases that are in direct contact with a fluid will partly dissolve in
the fluid. Eventually an equilibrium is set so that the fluid is saturated
with the gas. If the pressure on the gas is greater, more gas will dissolve
in the fluid. If the pressure is decreased, gas will leave the fluid and
go back to its free gas phase. (Boyle’s Law) The same applies to
the air we breathe. When we breathe, some gas dissolves in our body fluid.
If we scuba dive and breathe compressed air, the greater pressure of the
air as we descend deeper under water will allow more gas, especially nitrogen,
to dissolve in our bodies. Nitrogen is an inert gas, which means it is
not used by our bodies at all so therefore it is more prone to remain
as a dissolved gas in our bodies. Let’s say our bodies have set
an equilibrium at depth so that we have more nitrogen in our tissues than
normal. If we were to descend quickly, this excess gas would want to go
back to gas. The primary way it does this is through our lungs. If we
go up too quickly, the air won’t have enough time to be released
and could cause problems, which is what we refer to as Decompression sickness,
or the Bends. (This is like when you open a carbonated drink and see the
bubbles forming; they weren’t there before were they?)

Usually this is not a problem to a “free diving” animal since
only one breath is taken from the surface and the same breath is taken
back up. But, the duration and the depths of the dives performed by marine
mammals could still in some cases potentially cause symptoms of decompression
sickness. Nevertheless, it very seldom happens. Another problem is the
depth and pressure itself, exerted on the animal. It was long thought
that no human could go beyond 100m because he/she would be crushed by
the surrounding pressure.

Again, these animals have evolved an array of adaptations to survive at
great depths for long periods of time minimizing the risk of getting sick
or crushed by the extreme pressures.

First of all, cetaceans have an extremely flexible ribcage that can collapse with the pressure and thus prevent it from being crushed.
By doing so, the amount of nitrogen that can dissolve into the body tissues
is minimized because there won’t be much air left in the lungs at
all. The gas exchange occurs in the alveolar sacs and even after the lungs
have collapsed, there will still be some air left in these. To prevent
further gas exchange occuring in the alveolar sacs, the remaining air
is pushed out in the bronchioles and the alveolar sacs also collapses.
The bronchioles are cartilaginous and won’t allow any gas exchange
with the body. The result is that since not much gas exchange occurs with
the body, the risk of decompression sickness is minimised. Many marine
mammals even take it to the extreme of exhaling just before submerging!

So the problem of decompression sickness is almost solved. But, how do
they get oxygen if they don’t have any air in their lungs? First,
these animals can store oxygen a lot better than terrestrial mammals. The Weddell seal can store as little as 5% of its oxygen in the
lungs while it has about 70% oxygen is circulating in the body. Humans can only have up to 51% oxygen circulating the body and 36% oxygen
stored in the lungs. Additionally, almost twice as much oxygen can be
stored in marine mammal muscles compared to humans. These features are
explained by an elevated concentration of oxygen carrying proteins, (haemoglobin
in the blood and myoglobin in muscle).

But there is more than this… these animals have an extreme body
control when it comes to delegation and conservative use of accessible
oxygen stores. For example, when diving it is of course important that
vital organs such as the brain, the nervecord and the heart are continuously
supplied with oxygen. Digestive organs are, on the other hand, not in
great need of oxygen while under-water. Oxygen supply is therefore shut
down to these less important organs and put back in action when the animal
surfaces again.

Muscles are to a great extent dependent on the oxygen stored in the
myoglobin but have also a greater tolerance to lactic acid and therefore
anaerobic respiration. The muscles can then continue to do work after
muscle oxygen has been depleted. Although, if the animal spends a longer
time doing anaerobic respiration it will require a longer time recovering
on the surface before the next dive.

Another phenomenon noticed in marine mammals is called bradycardia. Bradycdia
is a reflex that slows the pulse when the animal dives, therefore less
oxygen is needed. What is even more interesting is that many
of these features have also been recorded in humans practicing freediving.
“Pipin” Ferreras, for a long time world champion and a legend
within the freediving community, has been recorded to be able to lower
his pulse to about 7 beats per minute. It has also been recorded that
the human lung also collapses to a certain extent at great depths. The
lungs get filled with blood while under pressure and go back to normal
upon ascent.

Maybe we aren’t that much different from marine mammals and our
aquatic ancestors as we thought?