Why care about the Amazon?

This Earth Day video on the Amazon offers a great opportunity to introduce you to *drumroll* environmental ethics. Let me take you to the other side…

Environmental ethics is a discipline in philosophy. Philosophy now doesn’t that sound posh! In 1962, Rachel Carson published her epic book Silent Spring on the negative effects of pesticides on the environment. This book was part of a growing environmental awareness movement which led to the birth of the environmental movement in the 1970s. The discipline studies the relationship between humans and the environment and the moral questions that arise with it.

As you might have noticed, there are different ways for people to view and value nature. Culture, religion, education, upbringing, knowledge, and the environment we live in all help form our frames of reference. In some cases defining experiences can add to the mix. Let your mind wander to those family trips in the great outdoors… or that severe case of poison ivy you got afterwards. It can influence you either way.

There are many different views and nuances. For now, I will stick to two common ones: anthropocentrism and ecocentrism.

How’s that for a Scrabble word! Anthropos means human in ancient Greek: this view is human-centered. Anthropocentrism believes that humans are separate from nature. Basically, we rule the world and decide what has value.

Classic anthropocentrism regards nature’s value as a resource-provider for humans. Like a huge supermarket, nature caters to our basic needs, like food, water, medicine, and clean air. The term ecosystem services refers to the benefits we obtain from the natural environment. Since the human population is growing rapidly, we will need a lot more of these resources and services in the future. Therefore, it kind of makes sense to take care of the environment for our own survival.

Other, less strong, forms of anthropocentrism believe that other organisms can have value in their own right, if we grant it to them. One of these views always gives priority to humans. For instance, helping people in poverty gain livelihoods would be a valid reason for deforestation.

Ecocentrism, on the other hand, is a nature-centered view. Humans are seen as a part of nature, equal to plants and other animals. In this picture, we are not that special. Oh, and old trees get picked over Disneyworld. Nature has value in its own right. A prime example of this viewpoint in practice is Ecuador adopting rights of nature in its constitution. The aim is to conserve the beauty and integrity of nature. Because, well, it is just great as it is.

So at last, a few words on the Amazon to illustrate these concepts. The Amazon is a vast and unique region that spans eight countries, covering about 40% of South America. It contains the world’s largest remaining tropical rainforest and the largest river basin on the planet. 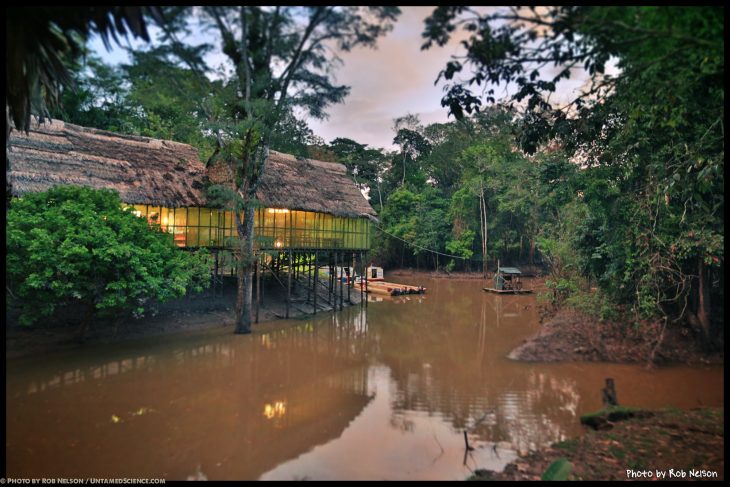 Putting our anthropocentric goggles on, we can spot a plethora of ecosystem services:

From an ecocentric point of view there are some other arguments to champion the Amazon:

Bear in mind that environmental ethics are not as polarized as this brief introduction might suggest. Arguments are often interconnected and complex; it is not necessary to adopt just one ethic for all cases and the entire planet. In addition, conflicts with human ethics are very plausible. The Yasuni ITT project is an interesting case to illustrate this. Its failing points out the importance of acting on ethics. It is indeed very important to keep discussing environmental ethics because of the impact they have on our environment and ultimately ourselves.

I hope this article gets you thinking on your own perspective on nature.

Have a nice chew on that!

Melody graduated with a Master's Degree in Biology with a focus on Environmental Science from the Vrije Universiteit Brussel in Belgium.  She spent a few years working at the Universiteit Antwerpen in research on ecotoxicology. She also has a teaching degree and has been teaching science to youngsters between 10 and 25 years old for more than 10 years. Currently, she coaches teachers and students in a training center for firemen, policemen, and ambulance operators. In her spare time she travels, goes scuba diving, and takes flamenco and yoga classes. In writing for Untamed Science, she hopes to make science understandable for everyone and show them that it is more rock-and-roll then they might think.