Hang Gliding - Atmosphere and Hauling Around a Glider 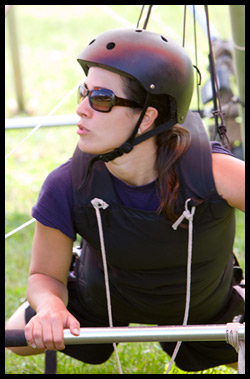 How do you explain the importance of the atmosphere in a way that students will be engaged enough to listen to? This question was brought up by the crew in order to make a video about ‘how the atmosphere works’. The logical answer from the crew was to do something extreme in the atmosphere. So … we enlisted in the best hang gliding school in the country – Lookout Mountain Flight Park near Chattanooga TN.

When you start hang gliding, the one thing you’ll realize is that you spend a lot of time waiting for the right atmospheric conditions. In fact, the flight school is set up around somewhat typical patterns in the weather. We start every morning around 7:45am on small practice hills. We can’t practice all day though because mid-day thermal heating creates too much turbulent weather for beginners. In fact, you can often predict the location of local thermals by finding hawks and vultures rising on them. In the afternoon (when the weather conditions get better) we gear up to do tandem flights high in the atmosphere – or even gear up to solo fly off the mountain!

Jonas’ Story of his first Jump off the training hill

I think all of us at some point have dreamed about having the ability to fly.Hang gliding was as close to this I could think of, and finally the time had come spread my wings for the first time and get one step closer to understanding a birds view on life. Well, that first step was going to be from a sloping 60ft hill, with maybe a couple of seconds of air time – with a certain belly-drag landing but still, it was time for me to fly.

“Clear”, my signal that I was ready. Glider resting on my shoulders, wings leveled, eyes fixed on a target far up ahead. A couple of slow steps forward, then jogging, The glider was sliding out of my hands and the weight was taken off my shoulders. Now running. Even though I still really have no idea what I’m up for, I kept my eyes focused on my target because, well, that is what I’ve been told to do. Suddenly I can’t feel the ground anymore, my legs are running in mid-air and I’m hanging in my carabiner – connecting me with my wings. A strange feeling strikes you when you realize that you no longer belong to the group of animals on Earth limited to staying on the ground. I am now also part of the airborne members of the animal kingdom. My feet were dangling and I could feel the wind playing with my glider. Even though I knew I was supposed to relax body and hands I felt myself involuntarily gripping on with my hands harder on the bars. Even though only a couple of meters above the ground, I was actually flying.

Amazing. I knew it was no point trying to avoid the inevitable belly flop, and only seconds later I was stopped on the grass, suspended in my harness
with a silly grin on my face. My first flight was over. It might have lasted for a full, breathtaking 5 seconds. A small first step, I know, but I can’t wait until tomorrow! 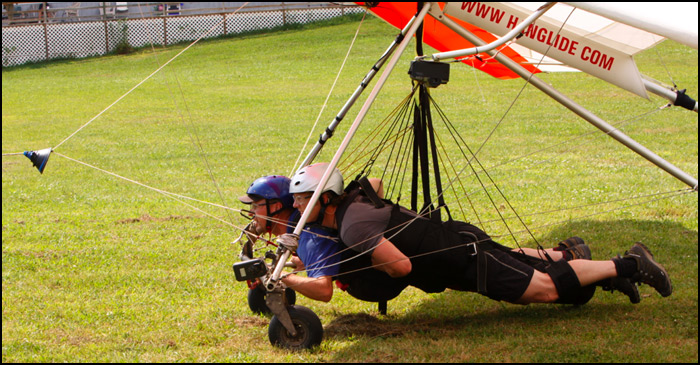 For me the first flight was both frightening and amazing at the same time. To give you some perspective, a tandem flight at lookout-mountain is done by attaching yourself to a hang glider and then attaching both the hang-glider and you to tow-line behind a plane.

The first thought when looking at the apparatus was, “who in their right mind thought this was a good idea to try for the first time?” In reality it is very safe, but you do have to know how to fly the glider when getting up behind the plane. On our way up we hit turbulent weather and the plane was jumping up and down and all around. That also caused the hang glider to jump around. It is extremely difficult for me to tell how much skill it took for the tandem pilot to keep us on track but it seemed like he had to make a lot of corrections. Finally, around 2,000 feet, we were able to pull the chord and detach from the airplane.

Upon releasing, the feel was extremely different. The way up was a roller-coaster ride, and the way down an air-boat ride. I was able to grab the controls and practice turning and maneuvering the glider. I was also able to look up and see the storm clouds that were producing the turbulence at eye-level. Finally, the instructor took the controls and finished the flight with a sharp turn to the ground which initiated a near nose-dive that resulted in a gentle (but fast) landing.
Overall, the flight was so new and exhilarating that I barely new what to say. I could hardly even sound exhilarated because I was so shocked by the first flight. I was on a ride to become one with the air. It was an amazing ride.

You know all those cheesy things people say about how it feels to fly? It’s all true – only better than description can purvey. Not only does the act of flying feel amazing, but the journey that gets you there makes it even more satisfying.

As with many things you just wish you could just go and do…there’s a process. Training for hang gliding on this mountain demands the same process for everyone, but everyone goes at their own pace. The simple look at it is that you start on the ground, train on the small hill, clear the small hill, train on the big hill, clear the big hill, jump off the cliff. Also, somewhere in there you have to read 300 pages and pass three written tests that make sure you really understand what you’re doing out there.

Now, I love a good process – there are few things more satisfying than crossing through an item on a list…but it gets tricky out here. Every step toward the ultimate goal of being a novice hang gliding pilot presents new challenges that you have to not only meet, but consistently master before moving on.

So what if you accomplished a skill yesterday, but you can’t seem to recreate it today? You have to start over. It messes with you – especially if others around you are advancing more rapidly on a given task. For instance, it took me almost twice as many launches to get cleared from the small hill as it did for Rob and Jonas. I needed to be able to have a beautiful launch, flight, and landing…four times in a row. I almost did it the same day as the boys – three good ones in a row – then a lousy flare kept me there until I could do it. Then I just started to make silly mistakes – not relaxed and not feeling my way through it. It took two and a half days for me, my brain, fears, muscle memory, hang-ups and frustrations to really “get it”.

I trudged up that “small” (60 ft) hill with the glider over and over over – at times I felt like Sisyphus, but every flight was about learning something new. Each setback offered more advice from my instructors – translating into better launches, better flights and more persistent, goal-oriented practice on technique – and more FUN! It was mentally and physically challenging, largely because I had to accept my own pace.

How did this look so easy for other people? It was just going to take what it was going to take to really understand – not just check an item off a list. No matter how much I got discouraged, disappointed or close to saying, “maybe I’m just not a pilot”, it was all worth it. It took more than 60 trips up and down that hill for me, and I’m glad for every, single one of those runs. There is no magic involved in learning skills, you just do them until you know them. All the work made it all that much sweeter to hear, “Haley, get off my hill!”

After graduating to the big hill, it was smooth gliding. I was ready to be there, and I cleared for the mountain in a day with confidence and utter joy (accompanied by a jump/hug onto my instructors). Now it’s time to run off the edge of this mountain…and I feel ready. See you at the landing zone!

Thank you to all my instructors at Lookout Mountain Flight Park – Dan, Trevor, Gordon, Diana, Tom and Tim – your patience, encouragement, feedback, and BIG FUN kept me going up and down those hills until my body and mind just knew what to do. There’s a reason why you guys are the best!

The school, learning to fly and tandem packages

We are going to refer everyone to the official hang gliding website when looking for directions and prices, but these are the current prices, directions and courses as of our course. 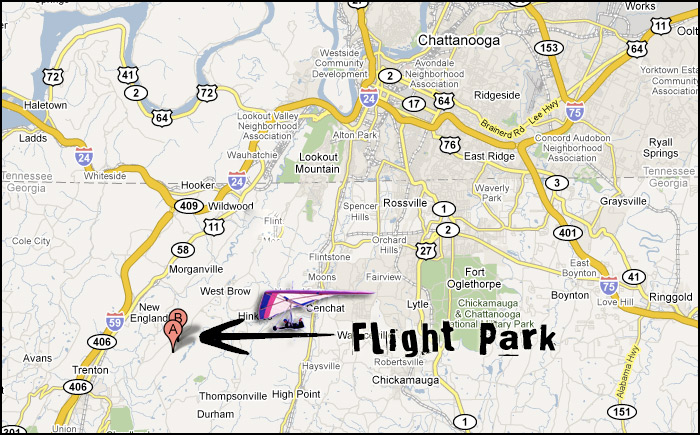