Kennedy Space Center - Will We See the Last Shuttle Launch?

From space, you can easily see the large island that the Kennedy Space Center is on.  This is of course, the launching ground for all of NASA’s rockets.  Missile Control is in Houston, but the launches all happen right here.

Seeing a launch has been Haley’s dream for a long time.  She has missed a few and watched others on TV. This year, we drove down to try and document the last launch of the Discovery Shuttle. To do that we got media passes, which lets us go behind the scenes, interview astronauts, and get a special spot to view the launch.  Plus, we get to see the whole thing from the special press section.

Here is a quick update from the front line:

Insert Video of the entire trip.

One of the main benefits of being in the media is that you get to see things a lot closer than you would if you were a VIP or tourist.  We end up seeing the launch from about 3 miles away.  Apparently there are only a few people that are any closer, one of which is the fuel team.  You don’t want to be much closer though as that shuttle is packed with a lot of explosive rocket fuel!

Upon getting through the gates, we went to the press area.  Its basically a large complex of buildings in front of the vehicle assembly building.  Just in front of this building is the historic “clock” where the countdown is shown.  Oddly, the only people that ever see this are the few media that film the launch. Yet, it becomes the classic and somewhat iconic view of space launches. 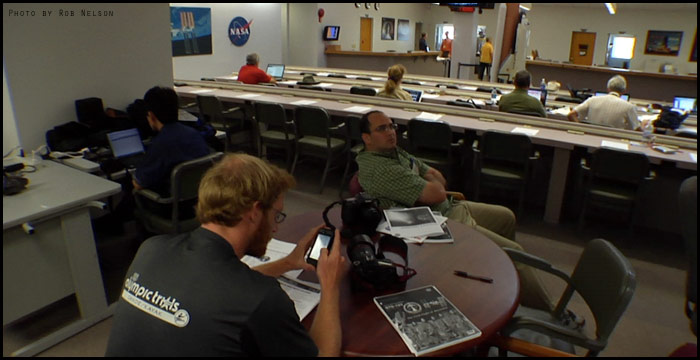 Inside the press building, there are rows and rows of tables with reserved seating for all the big news affiliates – CNN, ABC, Channel 2, … There are several live feeds from NASA cameras that are being displayed on a board.  All these feeds are being picked up by the news channels, who then turn around and air any footage they want.  Even media like us have the opportunity to grab the feed, just after it is shot and do with it as we like – free of charge.  Its a great system.

In the back of the room is a table with several sheets of paper for things to sign up for.  Since the media needs to be bussed around the facility, there is limited space to take people to the designated spots.  You can interview astronauts, watch the astronauts come out of their buildings before the launch, you can go place remote cameras in the marsh before the launch … and many other cool things.  We signed up for a few, the coolest of which was the roll-out.

After the shuttle is crawled out to the launch pad, the press are allowed to go out to watch what is known as the rollout.  Basically, the series of mobile scaffolds that are in place to help engineers check the rocket are “rolled away” from the actual ship. Its an amazing sight.  While most people are at least 3 miles away by now, we’re only about 300 yards from the actual space shuttle.