How to Stop the Emerald Ash Borer
MENU Skip to content

There was nothing unusual about the shipment that arrived in Michigan back in 2002. Like most products moving across America and around the globe, it arrived on wooden pallets. The materials were checked in, distributed, and the pallets cast aside, some of the two billion estimated in use around the country. Only there was something different about this shipment. Especially the packaging. Because at some point in shipping that material, tiny D-shaped holes began to appear in the supporting pallets.

From those holes emerged emerald green beetles, shimmering in the warmth of the Detroit summer sunlight. Once the new adults got their bearings, they flew off to do what insects do: mate, lay eggs, and die. The best place for this to happen was in ash trees. And that was the beginning of an invasion that would span 33 US states and several territories in Canada, killing hundreds of millions of ash trees.

“It’s coming… well, let’s do something about it.” Dr. Jiri Hulcr is an associate professor of forest entomology at the University of Florida and is helping to come up with a game plan to combat the spread of this insect. “The emerald ash borer (EAB) is the poster child for the homogenization of the world.” Hundreds of thousands of shipments shuttle around the globe every day, and the numbers are growing. And with each shipment comes the risk that North America will receive just a bit more than it bargained for.

Where did emerald ash borers come from?

“EABs are native to Asia,” he said. The ash species in China have genetic defenses against the beetles and can withstand their life cycle. “When you bring these to North America, these ash trees have no idea what to do with them. The beetles lay their eggs; the larvae bore holes into the tree, and the tree dies. The tree is losing its capacity to transport nutrients from the leaves to the roots. This is how an epidemic has started.

“No one noticed it much at first. Today, it has spread south to southern Georgia and northwards to Canada. Ash trees are dying in the wake of this epidemic.” The Annual Review of Entomology says that, in some Michigan forests, 99% of ash trees have died because of the tiny insect.

The dramatic color of the EAB is only the final of its four stages of life. It begins as an egg, nestled between layers of the bark of an ash. About a week afterwards, it emerges in its larval stage, and the feeding begins. As the EAB feeds, it leaves behind a telltale series of “S” marks, known as galleries. In the fall, the larvae will carve out a space in the ash to spend the winter. From winter to spring, they will go through a pupal stage and emerge in early summer.

By the time the adults emerge, leaving a “D” shaped hole, damage to the ash is already done. Within two to four years, the infested tree will die. The adults will mate, lay eggs, and die in the fall.

How can you help?

Although the invasion is well underway, Hulcr says there is still hope. “What do we do? We can learn from what’s happened and be ready when it hits places like Florida. There’s lots we can do.” 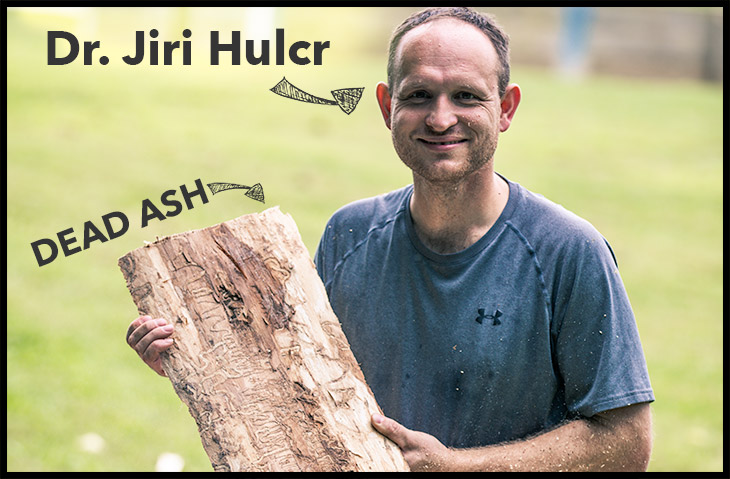 Here’s what he recommends:

Without doubt, the invasion of the emerald ash borer is a major concern in North America. Yet Dr. Hulcr remains optimistic: “It’s not all doom and gloom. We can absolutely make a difference. Tell your neighbor, tell your family. It’s coming; well, let’s do something about it.”

Learn more about the emerald ash borer and what to do about it here: