How do ants sting and why do fire ant stings hurt?

You are outside enjoying a beautiful summer’s day, walking through the tall grass, listening to the birds… when suddenly you feel a tiny jab in your ankle, followed by a terrible burning sensation. “What is that?!” You look down and see you have stepped just a bit too closely to an ant’s nest, and unfortunately for you, it’s a fire ant nest.

Ants make up a huge part of the diversity of arthropods and a large majority of ants in the world are capable of stinging. An ant stings for two reasons: (1) to immobilize and kill prey and (2) to defend their nest. For this very reason, if you find yourself too close to an ant’s nest, you might be in for an unpleasant surprise, especially if they are fire ants. The fire ant we are talking about here is commonly known as the Red Imported Fire Ant – Solenopsis invicta – which is an aggressive invasive species in many parts of the world, earning a spot on the 100 Worst Invasive Species List. Originally from the Neotropics of South America, they now occupy every continent except Antarctica. These ants are aggressive in defending the nest and tend to sting in hoards. Anyone who has ever been in this situation will assure you that the sting is quite painful. 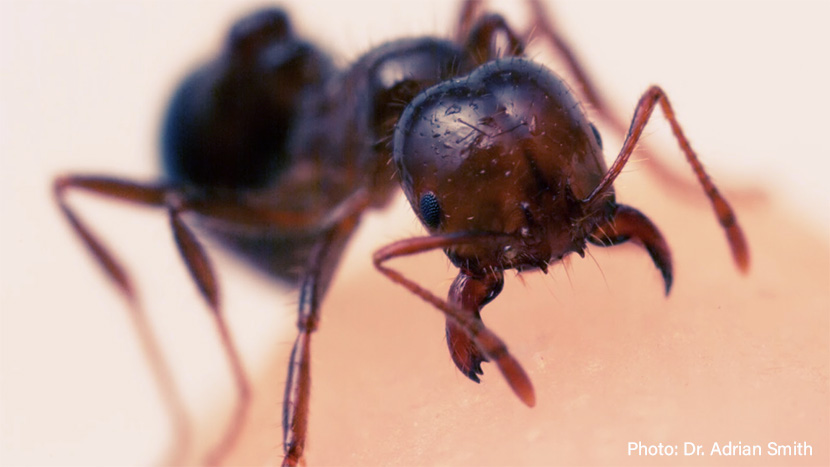 Ant stings and bites can ruin a day outside, but the mechanism is really quite interesting! We took a close look at fire ant stings in this video with Dr. Adrian Smith from the North Carolina Museum of Natural Science, who is also the host of the Ant lab youtube channel, and here is what we found out.

For starters, though there is sometimes confusion around whether an and “bites” or “stings” you, it is technically a bit of both, but as Dr. Smith says, you don’t actually really feel the biting. What happens is this – the ant uses its mandibules, those big snappy jaws, to grab hold of your skin and hang on, then they swing their abdomen forward and use their stinger to pierce your skin, this is where the burning sensation comes in.

Different ants have slightly different stinger structures, but the main structure is the same: 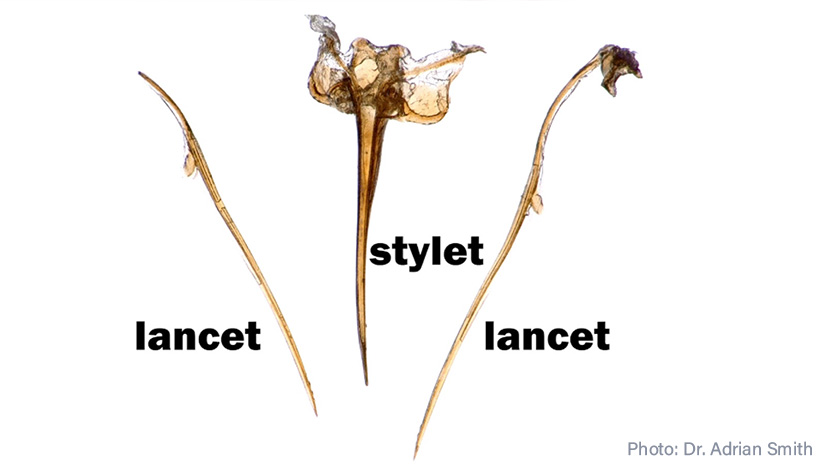 Fire ant stingers have three main parts, a large solid shaft, called the stylet, and 2 quarter circles that run along the sides called lancets, which form a sort of hollow delivery mechanism. The ant inserts the stinger and while the shaft stays in place the lancets are moved rapidly back and forth, pumping venom from the ant’s venom sac into your body. The faster the lanects move, the more venom they can inject. The venom itself is made of different compounds depending on the species, but they are all designed to cause pain – otherwise it wouldn’t be much use in protecting their nest! Fire ant stings have high alkaloid content for example, which is what causes that lasting burning and large red sores.

Here is another video with awesome footage of how ant stingers work with great fire ant stings pictures and video in slow motion. 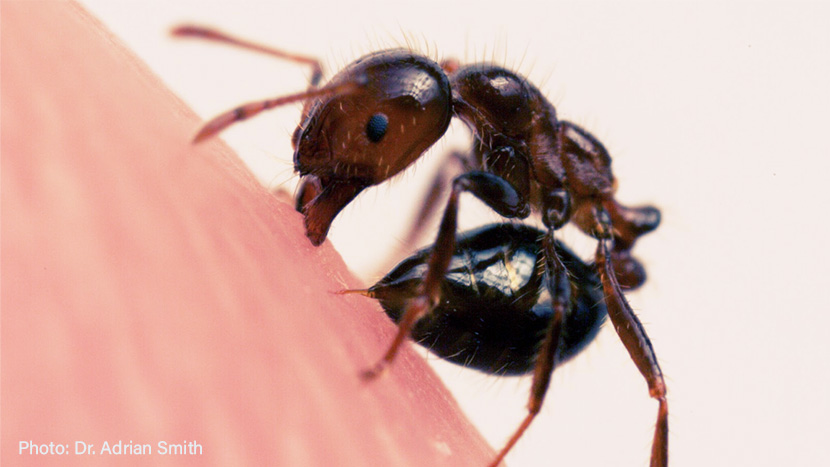 With all of this in mind, you might also be wondering, are ant stings dangerous?

The answer is… it depends. An ant sting has different compounds that cause a range of reactions in the human body, and some people can be allergic to them.

Fire ants for example are very efficient at delivering venom and they are probably up there with some of the most painful ant stings; they are also considered of medical importance, meaning their sting can cause health problems. However, in general, the quantity of stings has to be pretty high to send you to the hospital. What will happen though, is after stinging you will get pimple-like sores on your body, these are known as pustules, which in extreme cases will cause scarring, but will mostly just be sore for a few days. That being said, you could experience a fire ant stings allergic reaction, which indeed is dangerous. In short, try to avoid getting too close to a fire ants nest so you don’t experience too many stings, and if you notice other negative reactions after being stung it is recommended to see a doctor right away!

In conclusion, ant stings are painful and can be dangerous, but are also really cool! As well, even though these ants are invasive in many parts of the world, when they do sting someone they are just doing what they need to to survive and can’t really be blamed for fighting back against giant feet threatening to crush them.

Curious what would happen if you were to stick your foot in a fire ant nest with just a bit of vaseline and some ice water? Check out this article!