Tip to Tip: Cycling the Americas... Changed to Europe and Completed in 2012

In the summer of 2012, the crew of Untamed Science will begin their most extensive adventure to date: A one year tip-to-tip America ride to promote an understanding of the natural sciences on these two continents. Along the way, they will observe the way people live with nature, whether in cities, wild places or rural villages. What are the issues in these places? How well do the locals understand the importance of chemistry, environmental science, biology and ecology in shaping the way they live with the wildlife around them?

How do people’s perspectives on life and nature differ in relationship to where they live?

Beyond the crew’s goals to learn about the people and wildlife along the way, the story on screen is one of adventure and exploration.  Our world is full of interesting and often crazy people.  Trips like this tend to be magnets that pull them out of the woodwork.

Rob Nelson (Biodiversity): Rob has a masters degree in biology and filmmaking. He has been an active guiding force in Untamed Science since the beginning and continually pushes the crew to test the boundary of inspirational science filmmaking. Rob’s goal on this trip is to explore the ever-changing diversity of organisms in each region – from invasive species to endangered organisms. Rob has already taken 3 long distance cycling adventures, including Cycling the Last Frontier (2004).

Louise Fornander (Chemistry): Currently, Louise is getting her PhD in physical chemistry from Chalmer’s University of Technology in Sweden. Her main passion is to communicate the complexities of life through chemistry. To show that chemistry is everywhere on our journey, she might explain the chemistry behind the toxin of a poison dart frog or the chemistry behind climate change.  She is presently the host of a 12-part chemistry series for the International Year of Chemistry initiative.

Haley Chamberlain Nelson (Food and Culture): Haley is a biologist from the College of Charleston whose main focus has been on communicating science in an effective way.  Because Haley is extremely focused on family, one of her main interests on the trip is to explore food and the way each cultures view the food they take in.  Haley was the lead producer for our recent 80 part science series for Pearson publishing, and she produced 48 original songs for the topic of this series.

Jonas Stenstrom (Adaptations to Extremes):  Jonas is the other Swedish adventurer on this journey, and he’s willing to do just about anything to learn and share about the world around him.  On this trip, Jonas has made it his mission to explore the environmental extremes and adaptation. He plans to take the crew through the extreme habitats to explore how animals survive in those areas.  Jonas has been a producer with Untamed Science for 5 years.

journey will begin in Prudhoe Bay, near the Arctic National Wildlife Refuge. The team will travel south through the Yukon, British Columbia, and then down through Washington, Oregon and California.  From there, they will ride east towards Texas and then south through Veracruz, Mexico, across Belize and Honduras, Nicaragua, Costa Rica, and Panama. The team will take a boat around the Darien Gap and ride through Columbia to the Ecuadorian Amazon.  Finally, the team will ride through Peru, Bolivia, south through Chile – ending the trip in Tierra del Fuego, Argentina.

The only rule on the trip is that the team can not pay for hotel accommodation.  They are setting up a site where people can volunteer to house us for a night and show us the wildlife in their neck of the woods.  We feel it’ll be the most important way for us to fully understand how people feel about the wildlife that surrounds them. Plus, it will give Haley a chance to experience the cuisine from the locals!

In 2004, Rob Nelson wanted to test the feasibility of doing a trip like this – updating a travel blog with video and written content while on the road. At that time, travel blogging (especially with video) was very young. With only one other rider, he produced 22 videos in 2,000 miles of cycling!

The current crew has 4 travel writers and filmmakers who are each dedicated to tell voicing their own perspective on the trip: Food & Culture (Haley), Biodiversity (Rob), Adaptions (Jonas), and Chemistry (Louise).  The video travel blog will be made for a young adult audience with the intent of distributing segments in multiple venues.

The entire trip will be made on bikes, kayaks, sailboats, and dugout canoes.

In May of 2011, Rob and Haley will have their first kiddo – baby Mamba. Even in a perfect world, the back of a bike isn’t the greatest daily transport for a newborn – but that’s not stopping the crew. Haley is intending to bring Mamba with her in a support car, where she’ll be able to bring a filmmaking companion with her through each section. The support vehicle will allow the Nelson family to continually stay together and increase the ease of the video production.  With the aim of keeping all crew transport “green”, the crew is aiming to acquire an electric car, decked out in solar panels – making as much of the transport as possible completely renewable and eco-friendly.

Cultural Visits on the way

Along the way, the crew wants to visit and learn from the locals.  In their travels, have found that some of the most odd, interesting, inspiring and meaningful experiences have come about through seeking the advice of locals. Sometimes the people have a long history, such as indigenous groups. Others are recent migrants.  No matter who the people, the team will gather valuable perspectives as they cross the continents. Here are some of the possible groups we may be seeing along the way:

The route from north to south has many possible destinations along the way. We’ve highlighted a few of them, just to get an idea of the viable adventure the team is planning on doing. 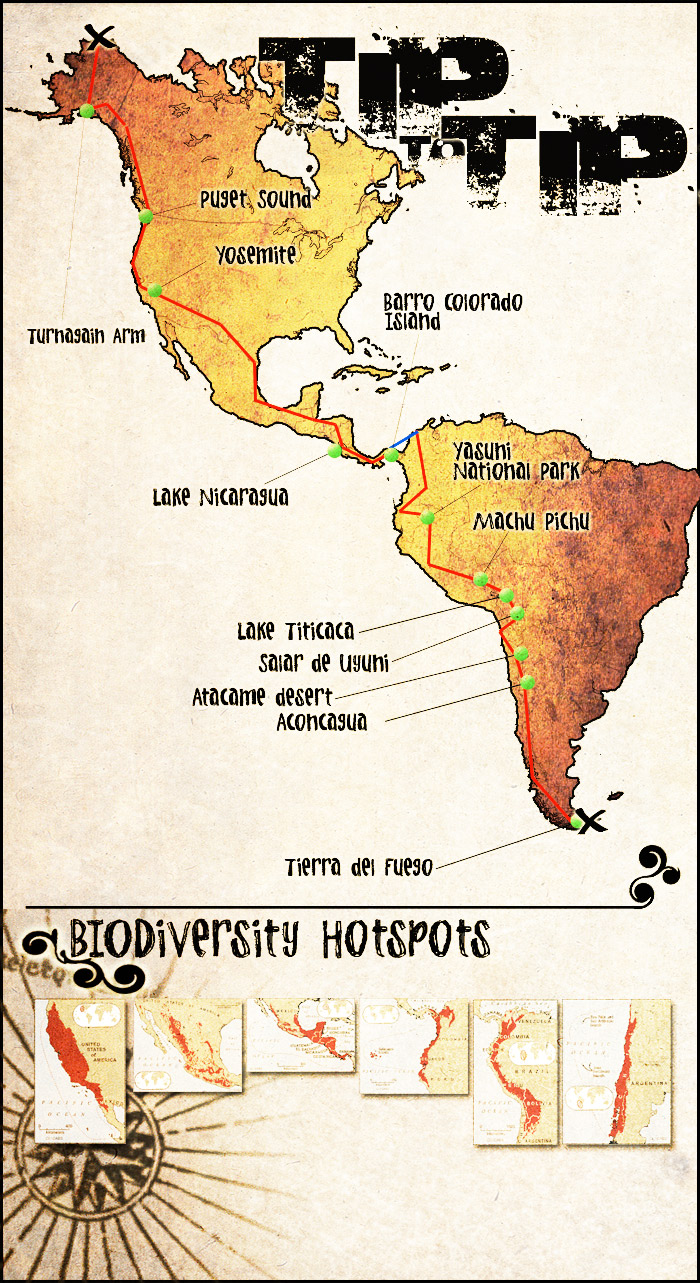