The Most Unusual, Deadly and "Wicked" Plants

My name is Rob Nelson, and I’ve been interested in marine science my whole life. Fish were my world. However, sometime in college I remember thinking that I know nothing about plants. They became one of my newfound passions, leading me to film and document them for over 10 years now.

I can tell you that there are some amazing plants in this world. In the plant kingdom, most of us imagine passive green leafy-beings. I know I did. Not many of us think of them as invaders, murderers or traps. Yet, the plant kingdom contains just as many killers and oddities as one can find in the animal kingdom. In fact, I’d probably argue there are more. You see, plants can’t move, so they only defense is in the toxins they produce. While I want to profile all different types of this world’s wicked plants, I think we need to start simple. In this week’s science podcast, we’ve started by profiling the invasive plants…

My wife and I have recently teamed up with the North Carolina Arboretum to make videos for their Wicked Plants display, which included more of the world’s worst weeds. Check out the display here.

Finally, since my goal is to share some of the amazing plants of this world, I created this short list.

1. The Largest Flower in the World

Rafflesia arnoldii: this parasitic plant develops the world’s largest bloom that can grow over three feet across. The flower is a fleshy color, with spots that make it look like a teenager’s acne-ridden skin. It smells bad and has a hole in the center that holds six or seven quarts of water. The plant has no leaves, stems, or roots.

Hydrilla:This little plant non-native aquarium plant was first introduced into Florida in 1960 and is now considered the most problematic aquatic plant in the United States. Management costs millions of dollars each year. Hydrilla’s dense mats suck out the oxygen, destroy fish populations and encourage mosquito breeding. It can sprout new plants from just small fragments containing as few as two whorls of leaves. That makes it very easy to spread. Hydrilla also prodcues turions and tubers in the soil, which can give rise to new plants after extended dormancy. In fact, one square foot plot of hydrilla can produce over 1,500 new plants! 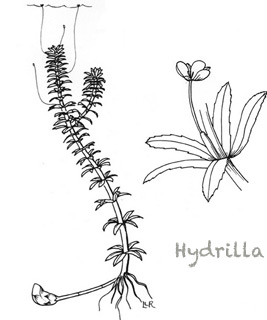 Hydrilla is now listed by scientists as a federally noxious weed. One scientist compared it to herpes. “Once you’ve got it, you’ve got it forever.” Read more about Hydrilla.

The Venus Flytrap is native to a small region around Willmington, NC. Here, on the forest floor in the sandy soils of the pine forests, these small flytraps thrive in an area poor in nitrogen. To supplement their nutrient needs, they take insects. This helps put them ahead of the competition.

The Titan Arum boats the largest single, unbranched infloresence. The largest flower goes to Rafflesia, and the largest infloresence actually goes to the Tallabot Palm. But, this plant takes the prize for more than it’s size!  It stinks! It’s often been called the Corpse flower, a name that doesn’t sound nearly as regal as the Titan Arum. Check out the Titan arum article we did on it after visiting a flowering one!

Pitcher plants grow all over the world in nitrogen rich soils. Would you be surprised to learn that they also share the habitat of the Venus fly traps? They’ve taken a different approach though. You see, they’ve actually formed into a vase, full of water to help drown their victims. While there are lots of Pitcher plants, and all of them seem to do this task slightly differently, they do share something in common. They all use animal protein to help give them an edge in their nutrient deficient habitats.

You might not realize it, but if you eat a diet of nothing but corn, you may just become a vampire. Check out the video we did on it.

The Centennial Exposition, held in 1876 in Philadelphia, was a carnival of wonders. Roughly ten million Americans were introduced to the telephone, the typewriter, and a miraculous new plant from Japan: Kudzu.

Plant enthusiasts loved the flowers fruity, grapelike fragrance and the fact that the vine could scramble over a trellis so quickly and control erosion. Soon farmers realized that livestock would eat the vine, making it a good crop to feed livestock, but kudzu had other wicked plans for America. The vines made themselves at home, growing up to a foot per day during the warm summers. Over two-dozen stems can emerge from a single crown, and each of those can stretch for over one hundred feet. A single massive taproot can weigh up to four hundred pounds. Its underground rhizomes ignore the cold and survive for years before sprouting. It strangles trees, smothers meadows, undermines buildings and pulls down power lines. The vine now covers seven million acres in the US, and the damage it has caused is in the hundreds of millions. If you live in the south, you might not want to sleep with the windows open. 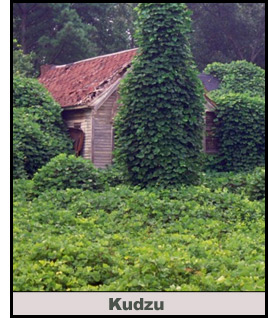 Do not be fooled by the stately, floral spires of purple loosestrife. This insidious weed grows from 3 feet to a towering 7 feet tall. Loosestrife takes over swiftly – a few plants dropping up to 2 million seeds per year – building a seed bank that can lay in the ground for years like a weedy trojan horse. If you drown it, the seeds can still live up to 20 months under water. Cut it up? Loose or trampled stems can produce roots and shoots, multiplying the problem. Try decreasing its light supply? Loosestrife will produce a different leaf morphology to adjust. With all these strategies in place, purple loosestrife can devastate native vegetation – overrunning thousands of acres of wetland at a time. 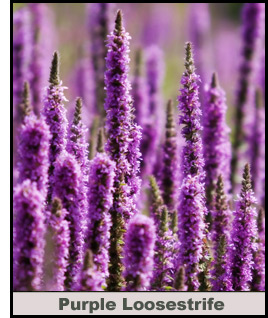 This free-floating aquatic fern introduced from an unregulated aquarium trade, can unbelievably double its population every two days! It forms dense mats up to three feet deep on the water’s surface. One of the largest infestations was a stunning ninety-six square miles of water surface. Giant salvinia is found in freshwater lakes, wetlands, and streams though out the southwestern US. It thrives in nutrient-rich water, so it grows particularly vigorously in water enriched by fertilizer run-off or sewer-treated plant waste. Just a tiny fragment chopped up by a boat propeller and stuck to the bottom of a vessel can spawn a who new colony in another water body. Once spread into a new lake it will take over until it has removed all of the oxygen from the water. Over 150 lakes in the US are battling Salvinia from Virginia to California. 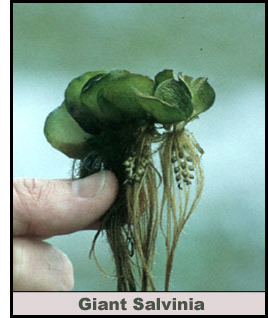 This South American native aquatic plant is not hard to recognize. It grows to about three feet tall and sports luscious lavender blooms with a distinctive yellow spot on just one of its six petals. Although it is beautiful, the crimes that this aquatic plant has committed are so great that it should be locked away forever – if only that worked. Water hyacinth forms dense, sprawling mats on the waters surface that even boats have a hard time penetrating. Those mats become islands of their own, providing the perfect environment for other semi-aquatic plants and grasses to sprout. It is freakishly prolific, doubling its population every two weeks. Because of that its gone on a crime spree in Asia, Australia, the Americans and other parts of Africa. This plant ranks as one of the world’s worst aquatic weeds. 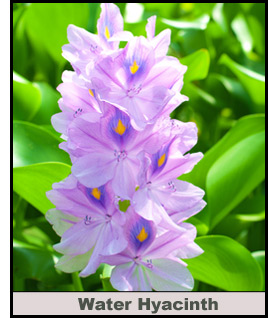 We’ve been inspired by this elegantly written book, and the work we did on the videos for the exhibit that we wanted to create a short list of plants, many of which we’ve filmmed already, so that you can explore some of the other deadly plants in a vicarious way.