The Family of the Mosquitos

Picture this: you are outside enjoying a beautiful camping trip or walk in the park, or simply sitting on your porch enjoying the sunset, when suddenly you feel it… that small biting sensation and itch; that’s when you know it got you. One of the deadliest animals alive has bitten you. You have fallen prey to… a mosquito.

Now many of us are very familiar with the potential dangers from encounters with mosquitoes, but most of us escape unscathed, save for some unpleasant itchiness and unattractive swelling. Unfortunately, for a large portion of the world this is not the case; mosquitoes are notorious vectors of disease, such as malaria. According to the World Health Organization (WHO) they cause millions of deaths per year and hold rank as one of the most dangerous animals known to man. For example, in 2015, malaria alone killed more than 400,000 people.

What is a mosquito?

Mosquito is the common name for the insect family Culicidae, within the order Diptera (flies), which belong to the class Insecta. Surely you have encountered a mosquito before, but just in case: they are long-legged insects with a slender, scaly body; two wings; feather-like antennae; and a long proboscis (elongated mouth parts for piercing and sucking). There is a lot of variation among mosquitoes, but in general they are considered small flies that measure between 0.12-0.24 inches (3-6 mm) in length. Males and females can be most easily distinguished by their antennae, where the females have much less plumose antennae than the males.

The Culicidae family contains more than 100 genera which contain more than 3500 described species worldwide. Individuals belonging to the Culicidae family can be found on every continent except for Antarctica, but, like many other organisms, the diversity of mosquitoes is highest in tropical areas. The majority of mosquitoes tend to spend their time near the ground and in low-lying vegetation, but there are also species found as high as the canopy. Females will usually be found thriving near some water source, where they will be able to lay their eggs.

What is a mosquito’s life cycle?

There is large variance in the timing of life events and the lifespans of mosquitoes since they live in such a wide range of climates, but their life cycles remain similar. Like all other flies, mosquitoes go through 4 main life stages: egg, larva, pupa, and adult. After mating with a male, females will find an appropriate habitat in which to lay their eggs. The type of habitat varies depending on species, however, all eggs do require water to hatch. In terms of development, how long it takes an egg to hatch is dependent on both species and geographical location. The main factor that determines development based on location is temperature, however water availability is also important because it is required for the eggs to hatch. The variance between development times among species is extreme: some eggs may hatch within a matter of days, or they may remain dormant through the entire winter.

Once the eggs do hatch, they enter the larval stage, and all mosquito larvae require water. The larvae will spend this life stage moving freely about the water and feeding almost continually until the enter their pupal stage. Interestingly, they do not have mechanisms for breathing underwater, but some groups breathe from the surface while others (Mansonia and Coquillettidia) breathe through plants! Mosquito pupae are largely inactive and normally remain floating at the surface, however, they can still move enough to evade prey if necessary. At the end of this life stage, the pupa cracks and the adult mosquito emerges. The adult at this point is fully developed, but it first must allow its wings to dry and its body to harden before it is able to fly away.

After some time, normally a few days, the mosquito is ready to find a mate and reproduce. The duration of the adult life stage is also quite variant, ranging from days to months; how long it lasts is again dependent on species, geographical location, and climate. Interestingly, life stage duration even varies with seasonal temperature differences, within the same species, in the same location.

What do mosquitoes eat?

As previously mentioned, there is a huge diversity of mosquitoes worldwide, and it might surprise you that not all genera/species require blood. Additionally, within the species that do consume blood, it is only the females that “bite”. (It should be noted that the word “bite” is technically incorrect, because when a mosquito feeds on an organism, it uses it proboscis to pierce the skin and suck out the blood, and there are no teeth involved. For simplicity’s sake, and for our purposes here, “bite” is used to explain the feeding process.) Males do not use blood as a food source; only the females of these specific groups require a “blood meal” for the development of their eggs. Blood contains essential fats and proteins. Other species do not require a blood meal for egg development but will take the chance to get one if they can. One genus of mosquito (Toxorhynchites) even uses stored nutrients from other larvae that it ate during its own larval stage to produce eggs! In general, mosquitoes prey on mammals for this blood meal, but they may also consume the blood of birds, fish, reptiles, amphibians, annelids (ringed worms), and even leeches.

The remainder of the Culicidae family, and also the males and females within the groups that do consume blood meals, take what experts refer to as “sugar meals”, consuming liquids from plants, such as fruit juices and nectar. Studying and understanding the feeding behavior of mosquitoes is very important to better understand disease transmission. If we know what mosquitoes are feeding on and when, then we can better understand the disease cycles that are so dangerous to us.

How do mosquitoes transmit disease?

The diseases mosquitoes transfer to humans are classified as vector-borne diseases (VBD). A VBD is an illness caused by pathogens–such as viruses, parasites, or bacteria– carried and spread by some vector, in this case a mosquito. When a mosquito feeds on an organism, it can pick up a pathogen, and after an incubation period, it may transfer pathogens from the first organism to the next that it bites. Essentially, when a mosquito bites a person who has malaria, for example, it picks up the pathogen that causes malaria, and after a sufficient incubation period, passes on that malaria to the next human that it feeds on.

The ability of mosquitoes to transfer these diseases makes them one of the deadliest organisms on the planet, killing millions of people a year. Since mosquitoes are such a great threat, there is a lot of effort and research underway to determine how we might reduce these deadly vectors of disease.

What are we doing about mosquito control?

One method implemented for mosquito control is source reduction, meaning reducing standing bodies of water and water-holding containers that allow adults to lay eggs. Source reduction, and the frequent changing of water in those that can not be removed, is recommended to help reduce mosquito populations in close proximity to humans. Additionally, maintenance of overgrown vegetation can aid in the reduction of lingering adults. However, we should take caution in how much we alter our natural environment, as other organisms may be impacted by reduction of wetlands or vegetation.

A common practice for mosquito control also includes the use of insecticides to kill mosquito populations in a certain area. Though this can be quite useful, and a rapid method for reducing populations in that specific area, there are fallbacks. First, chemicals can have non-target effects if they are not used properly and carefully. Secondly, the use of insecticides can lead to a insecticide resistance in the mosquitoes, which in time reduces the effect of these chemicals in terms of mosquito control. However, the scientists applying these insecticides do take precautionary measures to try to reduce these risks. For example, a major concern with insecticide use is the killing of bees, but when a spray is about to take place beekeepers are given notice so they may close their hives during the spray, and normally spraying occurs when the bees are least active.

What is biological control? Biological control is a method of controlling populations of problem organisms, and traditionally, this has meant introducing a predator, parasite, or other harmful competitor in order to reduce or eliminate the problem species. More recently, this definition encompasses use of molecular biology to optimize the ability of those natural enemies against the target population. As well, we have begun to work on altering the genetics of the target population itself.

The more well-known method of biological control is the use of natural predators to reduce populations of mosquitoes. This can be implemented for larva, pupa, or adult stages, and can prove effective and more environmentally friendly than pesticides, but it can also be risky and does not always have drastic results. The introduction of fish to water for example, seems like a great solution, however, when implementing predator control a careful risk-benefit assessment must be done. The introduction of a predator, especially when it is not native to that area, can end up having environmental consequences that impact species other than your target species, damages that can prove virtually impossible to reverse.

There are many methods of biological mosquito control that are currently in their trial stages and have not yet been widely used but show great promise for the future:

First off is the use of microorganisms in mosquito control. There is a large list of such methods, but two examples of this include introducing a fungus that is lethal to certain mosquito larva into a water body, or releasing male mosquitoes that are infected with the bacterium Wolbachia that is transferred to the female during mating and halts the hatching of eggs. These methods are more environmentally friendly than pesticides and more effective at targeting only the mosquito of interest, but careful research and monitoring is still key. Additionally, relatively new genetic modification technology allows us to optimize these microorganisms in terms of biological control, making them more effective than in their original state.

Last, and certainly not least, comes the genetic modification and release of mosquitoes themselves. Scientists are working on developing genetically modified male mosquitoes in a lab that will later be released into the wild to breed with wild females and spread certain traits. One method of genetic modification for mosquito control is to release individuals with genetics that require a higher dosage of pathogen to infect the mosquito. The idea behind this is that in order for a mosquito to transmit a disease it must first be infected by that disease. So, mosquitoes with higher tolerance to the disease require a higher dosage of pathogen to become infected and then to transmit the disease. This means the mosquito must have encountered a much larger amount of the pathogen in the first human to be infected by the disease, and then to pass on the disease to another, reducing the overall chances of transmission.

The second use of molecular biological control is to release males with genetic modifications that either render them sterile or cause death in their offspring. In the first case, when the sterile males mate with females, the act of mating takes place, but the eggs are never fertilized. Alternatively, we can release males that carry lethal alleles (an allele is a piece of genetic code), that can mate and may end up with viable offspring, but those offspring likely will not last long enough to reproduce themselves. These methods could be extremely effective in reduction of mosquitoes that act as disease vectors and are being further researched in hopes to apply them on a large scale in the future.

Another video to watch on Mosquitoes: 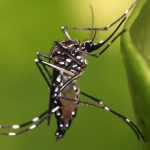