The order Amiiformes, is a primitive order of ray-finned fishes that contains only one extant species, the predacious bowfin.  Bowfin are generally only found in freshwater lakes in the eastern part of North America.  When full grown they are top level predators in the lake ecosystem.

Other Names for the Bowfin

Fishermen have several other names for the Bowfin, including “cottonfish”, “swamp bass”, “poisson-castor”, “speckled cat”, “beaverfish”, “cypress trout”, and “lawyer”. The scientific name for the bowfin isAmia calva.  The genus name Amia comes from the greek “amia”, which referred to a kind of shark.

Bowfin, like several other ray-finned fishes, are able to gulp air into their swimbladders to obtain oxygen. This is possible because the swim bladder is highly vascularized, meaning it is lined with blood vessels which allow it to act like a lung.

Where are Bowfin Found

Bowfin are found in sluggish lowland waters from the Great lakes and surrounding drainages south to central Texas and east to Florida.  Bowfin have been introduced to certain Appalachian streams.

The common microhabitat of the bowfin are clear waters that are abundantly vegetated.  Bowfin are often found in weed beds just over the edge of sand bars.  In areas where water levels fluctuated, some bowfin will burrow in the mud and reemerge when the water has returned.  Bowfin can also survive in waters with low oxygen levels (see air breathing in this article).

Bowfin are far from loyal in their reproductive strategy.  Males and females will both mate with numerous others.  While these fish might be known as primitive fish their mating rituals are fairly complex.  Males build circular nests that are about a foot and a half wide by six inches deep.  When a female comes into the nest they swim around, touching occasionally and then position themselves side by side. This position allows the males to fertilize the eggs that the females deposit into the nest.

After mating, the males are known as nest guarders.  They protect the young in these nests until the young are about four inches long.

University of Texas description of the species (with detailed literature survey) 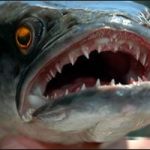