Stick insects are marvels of camouflage. They are most easily recognized by their long bodies and long slender legs. They often resemble the environment that they are living in or on such as leaves and branches. Some species have extra morphological characteristics such as thorny or leaf-like protrusions or even chaotic lichen-like growths that help the insect from being discovered by potential predators.

Additional anti-predator strategies that many of these stick insects have is the ability to change color depending on their surroundings, and some have the ability to emit a noxious or putrid smell when threatened. Some even go limp and fake death to fool predators into thinking that it is dead and possibly rotten. Some will shed the occasional limb to escape an enemy’s grasp during struggle. Others swing and whip at predators with spine-covered legs and abdomens.

There are approximately 3000 species of walking insect, but new species are being discovered often.

Stick insect species are often called walking sticks. Many species not only look like sticks and leaves, they move and walk in a way that resembles a leaf swaying in the wind. Phasmids (stick insects) range in size from the tiny, half-inch-long (11.6-millimeter-long) Timema cristinae of North America, to the giant Phobaeticus chani or Chan’s megastick, the longest known insect, measuring 567 millimetres (22.3 in). Females are normally larger than males.

Phasmids are found mostly in warmer tropical and subtropical areas—although several species live in temperate regions including places in the United States. There are 41 species in the US. Stick insects are vegetarian and feed mostly on leaves. Many species are found at night with a flashlight since many of them are nocturnal. And during the day they are motionless, hidden under leaves or laying flush against branches and trunks of trees. 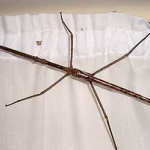