The Order Polypteriformes is a unique and ancient group of ray-finned fish. In fact, this group of fish is thought to have broken off from the other ray-finned fishes quite early in evolutionary history. The name of the order comes from the greek poly (lots of) and pteron (fins). Fish in this order are characterized by there high number of dorsal finlets instead of normal dorsal fins.
Today there are twelve living species and all live in Africa. Of these extant species, eleven are called bichirs and one is known as a reedfish. Most of the generalized information in this overview of the order Polypteriformes relates to bichirs.

Unlike most fish, the bichirs fall into a select group that have the ability to breath air. This is possible because a modification of their swim bladder into a type of lung-like organ. This makes bichirs extremely hardy as they can survive in oxygen-poor waters.

Other Characteristics of the Bichir

Bichir have several characteristics that make them appear similar to tetrapods. In particular, the jaw structure of bichirs is less like teleosts than it is to tetrapods. Their fins are fleshy and superficially resemble those of lobe-finned fishes. Bichir are covered in hard ganoid scales.

Other Good Resources for the Order Polypteriformes 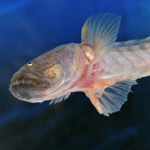