The phylum Cnidaria contains more than 9000 species of animals found exclusively in aquatic and mostly marine environments. Their distinguishing feature is cnidocytes, specialized cells that they use mainly for capturing prey. Their bodies consist of mesoglea, a non-living jelly-like substance, sandwiched between two layers of epithelium that are mostly one cell thick. They have two basic body forms: swimming medusae and sessile polyps, both of which are radially symmetrical with mouths surrounded by tentacles that bear cnidocytes. Both forms have a single orifice and body cavity that are used for digestion and respiration. Many cnidarian species produce colonies that are single organisms composed of medusa-like or polyp-like zooids or both. Cnidarians’ activities are coordinated by a decentralized nerve net and simple receptors. Several free-swimming Cubozoa and Scyphozoa possess balance-sensing statocysts, and some have simple eyes. Not all cnidarians reproduce sexually. Many have complex lifecycles with asexual polyp stages and sexual medusae, but some omit either the polyp or the medusa stage. 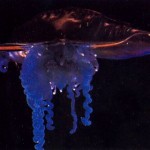 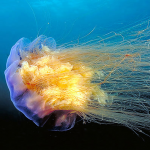