The bearded pig (Sus barbatus), also known as the Bornean bearded pig, is a species of pig in the same genus as our domesticated pigs (Sus). It is threatened in its native habitat on Sumatra, Borneo, and the Malay Peninsula.

The biggest distinguishing feature of these pigs is yellowish whiskers on the side of the face and over the bridge of the nose that form a beard-like appearance.

What do Bearded Pigs eat?

Bearded pigs are considered omnivores, eating a great deal of vegetable matter and meat. In the wild, bearded pigs spend a great deal of time foraging on the forest floor for food. In this habitat they eat mainly roots, shoots, and insects. They especially enjoy fallen fruit and will follow gibbons and other area primates hoping for them to drop fruit. In zoos, bearded pigs are given a variety of food. The Philadelphia Zoo, for example, feeds them a base diet of pellets specifically formulated to meet their nutritional needs. The zoo’s enrichment portion of the diet consists of a variety of root vegetables, fruit and leafy greens.

Predators like tigers and clouded leopards will take down wild pigs. Humans have also hunted pigs for thousands of years.

Little is known about the life expectancy of bearded pigs in the wild. Most agree that it is probably similar to a wild boar’s, which can live on average about 10 years. Some bearded pigs in captivity have made it into their 20s.

Reproductive rates of bearded pigs are much slower than those of the wild boar. Whereas a wild boar might produce litters of up to a dozen, bearded pigs generally have two or three piglets per litter. Females are reproductively mature at 18 months old and gestation is four months.

Zoos and Facilities with Bearded Pigs

Since these pigs are so rare in the wild, most people will never see them in their native habitat. There are a few accredited zoos across the US that have them for display. There are also a few unaccredited zoo’s and facilities that have these pigs, yet we don’t recommend this simply because the pigs are so rare that they need to be carefully breed in cooperation with all the organizations that have them. Decent zoos include the Philadelphia Zoo, Tampa’s Lowry Park Zoo, Tennessee Safari Park, Omaha’s Henry Doorly Zoo, Brownsville Zoo, and the San Diego Zoo. They are also kept internationally in around 15 others zoos, including the London Zoo and the Singapore Zoo.

These pigs wander through the forest as a group known as a sounder (an archaic term used to describe a group of wild pigs; most people just call them herds, but we’ll stick the fancy terminology here). These sounders can consist of up to 300 migrating bearded pigs. Most of these pigs are females and young pigs. The males (boars) generally don’t migrate with the main sounder. The groups can be around one day and gone the next.

Even though these pigs live on the Malay Peninsula, Borneo, and Sumatra, finding them is a different story. The dense forest they live in might make it tricky to observe. However, I have seen pictures from tourists of Bearded pigs at the Borneo Rainforest Lodge, in the heart of the island’s rainforest.

One of the best sources of information on the status of the Bearded Pig is the following report: 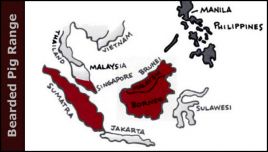