Like the black bear, the brown bear or grizzly bear once inhabited wide regions of the American landscape. Grizzly bears can live in a wide range of habitats including tundra, coniferous and hardwood forests, and sub-alpine mountain areas. However, extensive undisturbed areas of land are necessary for grizzly bear survival. Four hundred years of human expansion has displaced grizzlies into the remote northwestern regions of the continent. Most grizzly bears live in Alaska and Canada. In the lower 48 states, isolated populations survive in parts of Montana, Wyoming, Idaho, and Washington.

Some grizzly bears are the size of big black bears, while others may be as large as medium-sized polar bears. Because of their salmon-rich diet, coastal grizzly bears grow larger than their inland counterparts and can easily weigh over 1000 pounds. Grizzly bear fur ranges in color from buff to dark brown. Coats are often white-tipped, especially on the back, resulting in a frosted, or grizzled, appearance.

Humans are less tolerant of grizzly bears than black bears, primarily due to the aggressive-defensive behavior they exhibit toward humans. The evolution of aggressive behavior in grizzly bears may be tied to their habitat. When grizzly bears spread out from forests into treeless areas such as tundra and grasslands, they gained new food sources. Whereas female black bears often protect their cubs by having them climb trees, female grizzly bears with cubs compensate for their lack of cover by responding to perceived threats with real or bluff attacks.

Grizzly bears are omnivores, primarily eating vegetation such as roots, bulbs, berries, grasses, and sedges. Grizzly bears’ prominent shoulder muscles, along with their long, front claws, are adaptations for digging up plant roots. They also eat insects and fish. Like black bears and polar bears, grizzly bears can be attracted to human food sources such as garbage and pet food. In some areas, grizzly bears prey on caribou, moose, and elk.

Like black bears, grizzly bears dramatically increase their food consumption in preparation for winter hibernation. Both sexes dig dens as winter approaches. Grizzly bears often position these dens at the bases of trees. A common misconception is that bears den to avoid cold weather. Denning is believed to be a survival adaptation that allows bears to survive times of limited food availability. 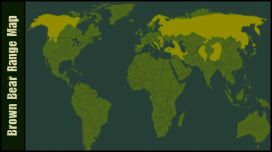