The Colossal Squid (Mesonychoteuthis hamiltoni), lives in the deep, cold waters of the Antarctic. It is also known as the Antarctic Squid or the Giant Cranch Squid. As of 2009, it is considered the largest species of living squid. Relatively little is know about this species, because only a few specimens have been studied. However, from these specimens, scientists estimate that the colossal squid can reach a maximum size of around 12 to 14 meters (39 to 46 feet). This makes it not only the largest squid but the largest invertebrate species on Earth!

Where is the Colossal Squid found?

The colossal squid has only been found in the waters of the southern oceans, including specimens collected on the south end of New Zealand, southern Africa, and the southern tip of Argentina.

What does the Colossal Squid eat?

From studies of the guts of these and other similar squid, scientists can deduce what this squid eats. They believe the primary diet consists of chaetognaths, toothfish, and other deep sea squid.

What eats the Colossal Squid?

Squid dissolve readily in the guts of predators, such as whales, yet one piece of the squid remains: the beaks. Based on a recent study, scientists found that 14 percent of the squid fed on by Antarctic sperm whales are Colossal Squid. By calculating the estimated sizes of all squid found, it was then deduced that 77 percent of the biomass of sperm whales consisted of colossal squid. Other organisms that feed on these squid are bottlenose whales, pilot whales, southern elephant seals, Patagonian toothfish, Pacific sleeper sharks, and albatross. 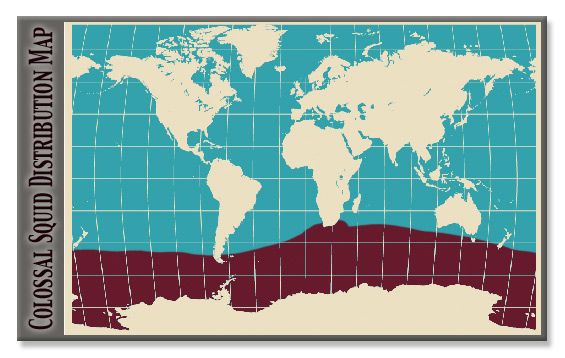