Red Wolves in the US: Will they Survive Extinction
MENU Skip to content

What is a red wolf, anyways?

With most animals, it’s pretty cut and dry as to which specimens are a separate species or not. The red wolf is a bit different. No one’s really in agreement as to how red wolves fit in amongst the other North American canids—wolves and coyotes.

There have been many studies done trying to classify red wolves into a nice taxonomic category, but there’s competing evidence for each of three possibilities: that red wolves are a wolf/coyote hybrid, that they’re a subspecies of gray wolf, or that they’re a completely separate species. Many people (including the U.S. Fish and Wildlife Service, or USFWS) classify red wolves as their own species. Admittedly, though, they do look like a cross between a wolf and a coyote: they are intermediate in size, coloration, and even behavior.

What happened to red wolves?

Before Europeans arrived in North America, red wolves spanned a wide range across the Eastern U.S., from Texas all the way to New York. Unfortunately, they found themselves in the crosshairs of early settlers, who thought red wolves were dangerous competitors and needed to be wiped out. The early U.S. governments even put out bounties on red wolves as far back as 1768—before the U.S. was even a country!

A long history of being hunted meant that by the early 1900s, there were already very few red wolves left. Frankly, it’s surprising that they lasted as long as they did. Once the Endangered Species Act was passed in 1973, the red wolf was one of the first animals placed on the list.

How were red wolves saved from extinction?

To save red wolves from almost certain extinction, biologists had to do something a bit counterintuitive: they removed from the wild all the living red wolves that they could find. In Texas and Louisiana, biologists captured around 400 animals they thought were red wolves. Their next challenge was sorting out which animals were really red wolves, and which ones were just coyote/wolf hybrids.

What they found was shocking: out of the original 400 animals, only 17 were pure red wolves. That was all that was left of the entire species. It seemed that red wolves had been interbreeding with coyotes for a long time because they just couldn’t find any other red wolves in the wild. To make matters worse, three of the real red wolves couldn’t breed, so they only had 14 wolves left to work with.

The remaining red wolves were set up in a captive breeding colony at the Point Defiance Zoo and Aquarium in Tacoma, Washington. At that time, no one had ever really reintroduced wolves to the wild, so they did a few “trial” releases in South Carolina to hone down their strategy before trying it on a larger scale.

After several years, they had enough young red wolves to start reintroducing them into the wild. They settled on one hopeful location in the red wolves’ former range: the Alligator River National Wildlife Refuge in North Carolina. At first, it looked like a success: scientists soon began releasing red wolves in other areas of Mississippi and Florida as well. But then, something changed.

What is the future of the red wolves?

As of 2020, there are about 20 red wolves left in the wild, half of the population size from just two years prior. Another 175 red wolves remain in captivity. Their future hinges on a lot of things: keeping poaching to a minimum, finding broad-based public support for reintroduction efforts, minimizing hybridization with coyotes, and continuing monitoring and release efforts throughout the red wolf’s former range. Any way you slice it, it’s a lot of work.

The USFWS is currently revising their red wolf management plan. Stay tuned for updates on the future of this program and of the species!

The simple answer is no… but. We outline how to survive a wolf attack here and discuss ways to make sure you can appreciate these amazing canids. 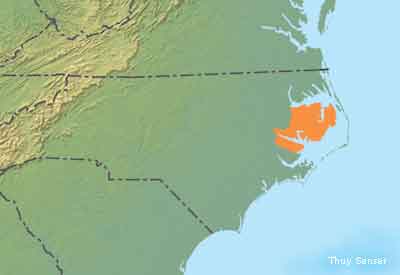