School Shark: A Shark of Many Names

Have you ever heard of the school shark? If not, maybe you know it by another name. Do tope shark, snapper shark, or whithound ring a bell? The names soupfin shark, oil shark, and vitamin shark give a hint about its importance to people.

The school shark has many common names but only one scientific name—Galeorhinus galeus. This is an excellent example of why scientists use scientific names, classifying each distinct species by a single official moniker. Otherwise, how would scientists in different areas know they’re talking about the same shark?

Confusing as its list of nicknames may be, the school shark has an interesting history that continues to play out to this day. Read on to learn more about this fun and fascinating shark!

At first glance, the school shark looks like a lot of other sharks. It’s dark grayish-blue on top, and white underneath. Look closer, though, and you’ll see the differences.

The school shark is long and slender. In fact, its snout sticks out much farther than on most sharks. It also has an odd-shaped caudal fin (tail). The top half is much larger and longer than the small bottom half, and it also has a distinct notch in it.

They have very large, almond-shaped eyes (all the better to see prey with), but don’t worry: humans aren’t on the menu. These sharks only grow to a maximum of 6.5 feet in length, and in many parts of its range, they don’t even get that big. They’re much too small to eat you!

If you see one school shark, chances are you’ll see a few more, because surprise: the school shark likes to…well…form schools (bet you didn’t see that one coming). They tend to form schools that are segregated by size and gender, somewhat like high-school cliques. While it seems like a cute trait, this can come back to haunt them, as we’ll see later. 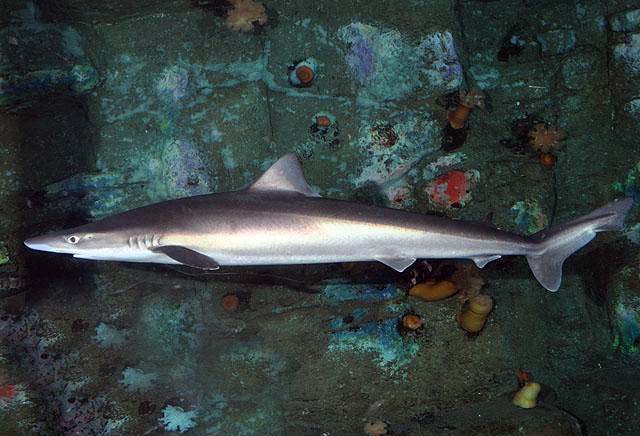 Where do school sharks live?

Part of the reason school sharks have so many different common names is because they’re found all over the world, with only a few exceptions, like the northwest Pacific and the northwest Atlantic.

They tend to hang out around the coast rather than the open ocean, like the mako shark or the whale shark. This makes it easier for people to catch them—and catch a lot of them they do. School sharks are harvested anywhere they’re found, which is another reason why there are so many names: each culture and region has developed their own name for this commonly-caught shark.

Life as a School Shark

School sharks aren’t one to swim up to you to say hi (unlike a playful porbeagle, maybe). They prefer it a bit on the shadier side, so they tend to hang out just off the bottom of the ocean where they can eat bottom-dwelling fish, crustaceans, and molluscs (although they will travel higher to feed if there’s a tasty buffet up there).

Like a class of kids on a field trip, each school shark is also migratory with its school. Schools of school sharks can migrate hundreds of miles, and where they go varies based on what region they’re in. For example, school sharks caught in UK waters have been recaptured in northern Iceland, and school sharks are known to bounce between Australia and New Zealand.

Female school sharks reach sexual maturity between ages 10-15, and will live for a long time: up to 60 years. Females are ovoviviparous, which means they will hatch little pups within themselves before giving birth to litters of up to 52 live pups. The bigger the female, the more pups she will have. Depending on where the momma shark lives and how many nutrients she can get, she can give birth every year, every other year, or once every three years.

Life is tough as a school shark. Everywhere they go they are targeted by humans in recreational and commercial fisheries. They are often intentionally targeted or unintentionally caught in gillnet fisheries and trawling operations.

Remember how they like to form segregated schools based on different sizes and sexes? That makes them more vulnerable to overfishing. All it takes is a bunch of well-timed passes by fishing boats to scoop out a large chunk of breeding-age females, for example. Without those females, the population growth will slow, decline, or even stop.

What’s worse, there are no harvest regulations in virtually all of its range. Even in parts where there are harvest restrictions, there have been few studies done to actually count the school shark population. That makes it tough to say how many sharks really are out there, and if current management is enough to protect them.

Australia, New Zealand, and California are among the only regions that have taken any action to protect school sharks. These efforts include closing the season during vulnerable times of the year for school sharks (such as when females are giving birth), and regulating the sizes of gillnets to catch only certain sizes of sharks.

Because of the dire situation and lack of knowledge of school sharks, the IUCN has classified these interesting fish as Vulnerable. Only time will tell whether these sharks persist in the future. In the meantime, it’s likely that some populations will become extirpated (extinct in a certain location, but not worldwide). If governments are willing to get on board with managing school shark populations in the future, we can prevent them from going extinct completely.