What is a Wetland?

A Wetland is described by the plant species that live in it. If an area is wet enough for long enough to support a majority of plants that are adapted to wet conditions then you have a wetland. An example might be a patch of land that is dominated by cattails. Since cattails are adapted to a life where they are partially submerged by water, then the area would be considered a wetland, even if it is dry for a part of the year. Not all wetlands are restricted to freshwater habitats either.  Many saltwater marshes thrive in the salty coastal zones.

There are many types of wetlands. Scientists often divide them up into the following groups.

Marshes are characterized by the presence of soft-stemmed vegetation adapted to saturated soils. These are typically grasses, sedges or rushes. Some common ones include prairie potholes, the expanses of the Everglades, and salt marshes.

Swamps are characterized by the domination of woody plants. There are many different kinds of swamps including the cypress swamps of Louisiana, Red Maple swamps in the Northeast and the Mangrove forests of tropical and subtropical regions.

Bogs are distinctive wetlands that are low in nutrients and often contain very acidic water and extensive peat deposits. Bogs are also one of the stages of succession as a lake fills in.

Fens are different from bogs in that they receive their water supply from either runoff or groundwater (not rainfall). This usually results in a different water chemistry. Fens have either neutral or alkaline waters and are typically not stages in lake succession.

Where are Wetlands Found? 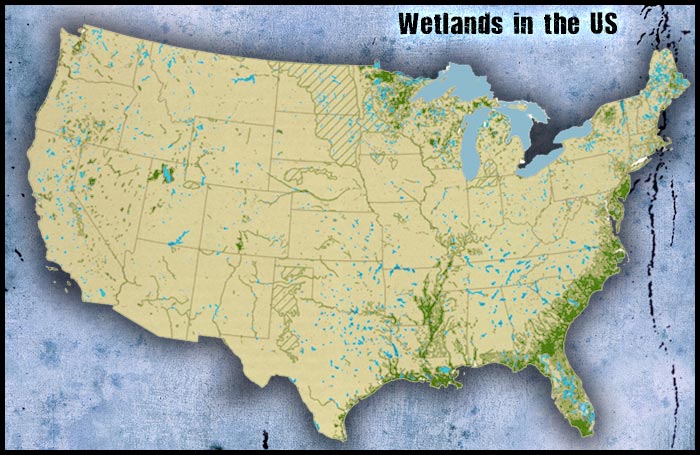 Plants in a Wetland

Plants that are adapted to moist and humid conditions (such as those found in wetlands) are called hydrophytes. These include cattails, water lilies, bulltongue, sedges, tamarisk, and many kinds of rush.

Wetland plants are adapted to the saturated conditions that persist for a majority of the year. The different vegetation types in a wetland can be divided up into emergents, floating, and submerged plants. 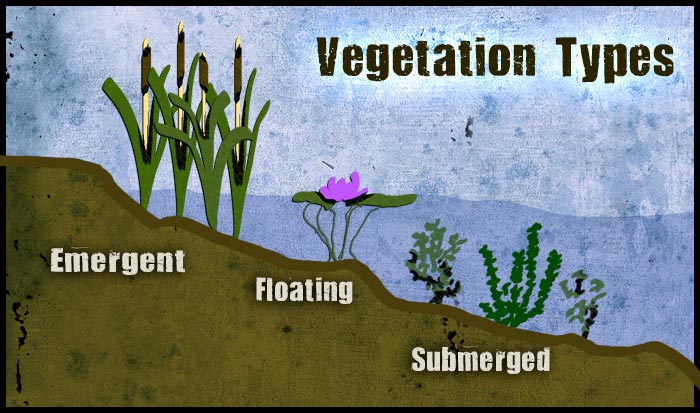 For the species profile of a wetland plant we decided to pick hydrilla. It is an extremely competitive invader that we have only recently found ways to control. Of particular interest, there is a small fly larvae that eats through hydrilla. We filmed the following episode at the Army Corp of Engineer’s Lewisville, TX, research facility and at their Vicksburg, MS, research facility.

How you can help Save Wetlands

This may or may not come as a surprise, but Wetlands have been reported to be the most threatened ecosystem in the world today. People often see wetlands as wastelands and non-productive land, and these valuable regions are filled in and destroyed. This is endangering human, plant, and animal life at an alarming rate. So what can you do? To help, we’ve found some great links to help you plan your course of action: