The digestive system plays an important role in the absorption of nutrients into the body.  It takes the food we ingest, breaks it down mechanically and chemically in the mouth and stomach.  It then absorbs nutrients, fats, proteins and water in the intestines before eliminating the waste through the rectum.

The main steps in the digestive system 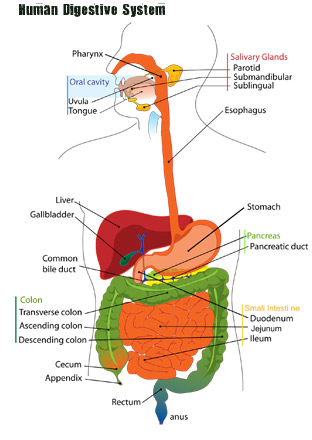 The digestive system is designed to do a few major things. They can be grouped into four categories:

Following Food from Mouth to Anus

To understand how our food is digested in the digestive system, it might be very useful to follow our food along its normal path, starting from the mouth.

Imagine for just a second that you’re hungry and your eyes gaze upon a nice home cooked thanksgiving turkey dinner. Your mouth starts to water. The salivary glands in your mouth are triggered to start producing saliva, a compound that will aid in the digestion of the meal.

As food enters your mouth, your teeth begin mechanically breaking down the food into small and smaller pieces. The saliva starts to chemically break it down as well. Soon, your conscious mind says, “lets swallow this food.” You swallow it and take another bite.

While you’re thinking about your next bite of food, your nervous system is helping to move the bolus (the food package you swallowed), down throat. A small flap of skin called your epiglottis makes sure your food goes down your esophagus. Movements of the smooth muscles, known as peristalsis help move that bolus down your esophagus. When it reaches your stomach, a sphincter opens and dumps the food in.

Inside the stomach, cells start to secrete different acids that help increase acidity to a pH of 2. This strong acidic environment kills most bacteria and starts to chemically break apart the food.  Movements of the smooth muscles in the stomach, known as peristalsis mix and churn the food up more.  After the food has been well mixed and has a consistency of oatmeal, it is ready to move to the small intestine.  At this stage it is known as chyme.

To move into the small intestine, chyme must pass through the pyloric sphincter.  From here it enters the duodenum, the first part of the small intestine.  The liver mixes in bile, which helps break down fats in the food. The pancreas also secretes digestive enzymes that aid in digestion.

Most of the nutrients are absorbed from the small intestine and moved into the blood stream via a system of small folds, called vili.

So there you have it – a basic rundown of what happens to the food we eat from the time we eat it, to when we excrete it. While we didn’t go into detail on all the steps, we would encourage you to explore as much as you can about each step of the process. Review our links below for more detailed explanations of the entire process. 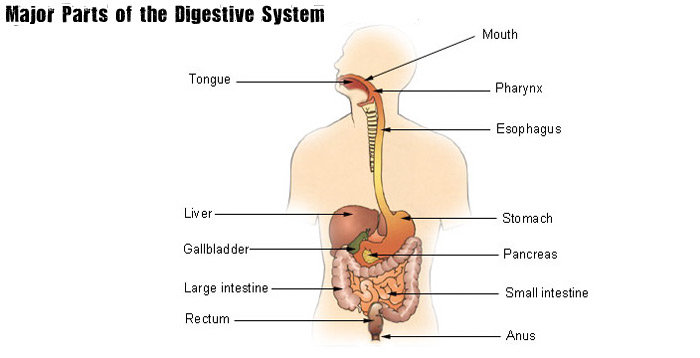 Links to other Digestive System Resources

As you may have gathered from the above information, the digestive system is a complex and intricate part of the body. A number of things can go wrong with this system and when they do illnesses can be severe and lower a person’s quality of life significantly. You can learn more about these health issues and digestive system diseases at MyMed.com.